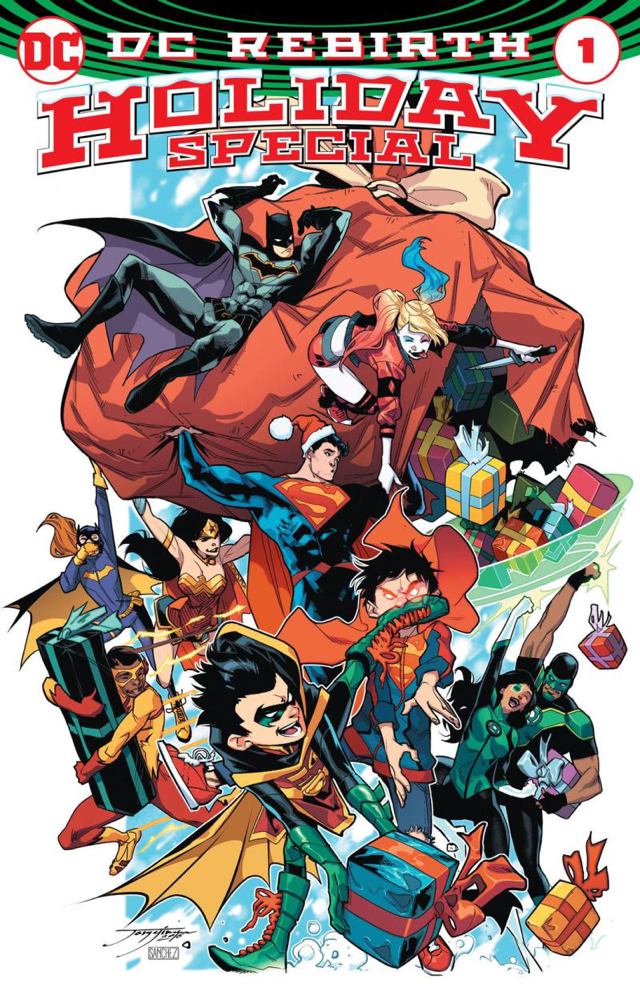 Clocking in at nearly 90 pages, DC Comics brings in a slew of creators to take on the Holidays in the DCU. Before talking about the individual stories, I’ll say this straight up: this was an absolutely delightful experience to read, and I think DC really captured how fun a holiday special can be.

Paul Dini, Elsa Charretier and Hi-Fi provide the special with the connective tissue, A Very Harley Holiday. They do a great job with this, kicking off the special with the right amount of humour for this collection of stories and continuing the laughs throughout. I really enjoyed some of the ongoing gags throughout and Charretier delivered some great art here. She got to play with a large cast and really nailed the comedic elements of this story.

Tim Seeley, Ian Churchill and Alex Sollazzo’s The Last Minute takes on the two generations of Kents and Waynes, with a little “Jingle All The Way” thrown in for fun. What impressed me with this story was how they showed the closeness between the Kents and Waynes in such a short space, and Superman shopping for the hottest toy of the year is just plain fun.

Eric Esquivel, Dan Jurgens, Norm Rapmund and Hi-Fi bring Krypto into the mix with For The Dog Who Has Everything. This story sucks you in with coziness and doesn’t let go, and I’m a sucker for anything with a big pupper in it. Jon really shines in this one.

Heath Corson, Gustavo Duarte and Marcelo Maiolo class up the joint with The Night We Saved Christmas. Detective Chimp follows a case to Gotham and has some of the best moments of the whole special with Alfred and Bruce. This one may have been my favourite story overall and Duarte and Maiolo really impressed me with how expressive their artwork was. This story was dynamic and hilarious.

Mariko Tamaki, Matias Bergara and J. Nanjan followed with Dreaming Of A White Christmas. Constantine has gotten himself tied up in something messy, and luckily for him he stumbles into Wonder Woman who can attempt to sort it out for him. Tamaki wrote some killer dialogue in this one and I really liked where the team took this short story.

James Tynion IV, Robbi Rodriguez and Alejandro Sanchez take on the Central City Speedster and his Rogues with A Flash Christmas Carol. Rodriguez’s artwork is hyper stylized and he really cuts loose here, with great results. This story showed the unique relationship between The Flash and the Rogues, and really drove home the bizarre code of ethics the Rogues hold themselves to.

The New Super-Man gets a brief appearance from Gene Luen Yang, Andrea Mutti and Ben Hunzeker in Day Of Returning. I loved how this story showed the multiculturalism of the holiday season beyond Christmas. Up to this point we hadn’t had Christmas sweep the board for the holiday focus, but this story more than the others really showed a different angle beyond Christmas and Winter Solstice celebrations.

K. Perkins, Paolo Pantalena and Arif Print bring Batwoman into the fray with Light In The Dark. More than any other story in the collection, this one feels like it could act as a spark to ignite an arc down the line. The creative team sets up a mystery and follows it through in just a few short pages but it really felt like there was more story to tell here. Pantalena delivers some great Batwoman art and she is striking when she costumes up and kicks some ass.

James Asmus, Reilly Brown and Tony Avina bring the old Titans into the fray with What A Year For A New Year. Slightly more reflective than some of the other stories going for pure comedy, this one will hit the nostalgia button for people who have been reading these characters for 20+ years.

Bill Freiberger, Thomas Pitilli and Ben Hunzeker launch straight out of the Titans story into a quick little meet-up tale featuring Nightwing and Batgirl. No other way to describe this one than “cute”.

The Green Lanterns round out the different tales with The Epiphany from Steve Orlando, Vita Ayala, V. Ken Marion and Tony Avina. This is a well crafted story that I appreciated a lot. There’s a strong focus on Jessica and what she brings to the Green Lantern Corps that is different from Simon, Hal, Guy and the infinite number of headstrong dudes that sling their rings around.

All in all, this is a crazily well crafted set of short stories by a great mix of creators showcasing different styles, holiday traditions and a ton of characters. Lots of laughs, lots of heartwarming moments and almost 90 pages of entertaining content that got me even more in the holiday spirit than I already was. I highly recommend giving this one a shot.