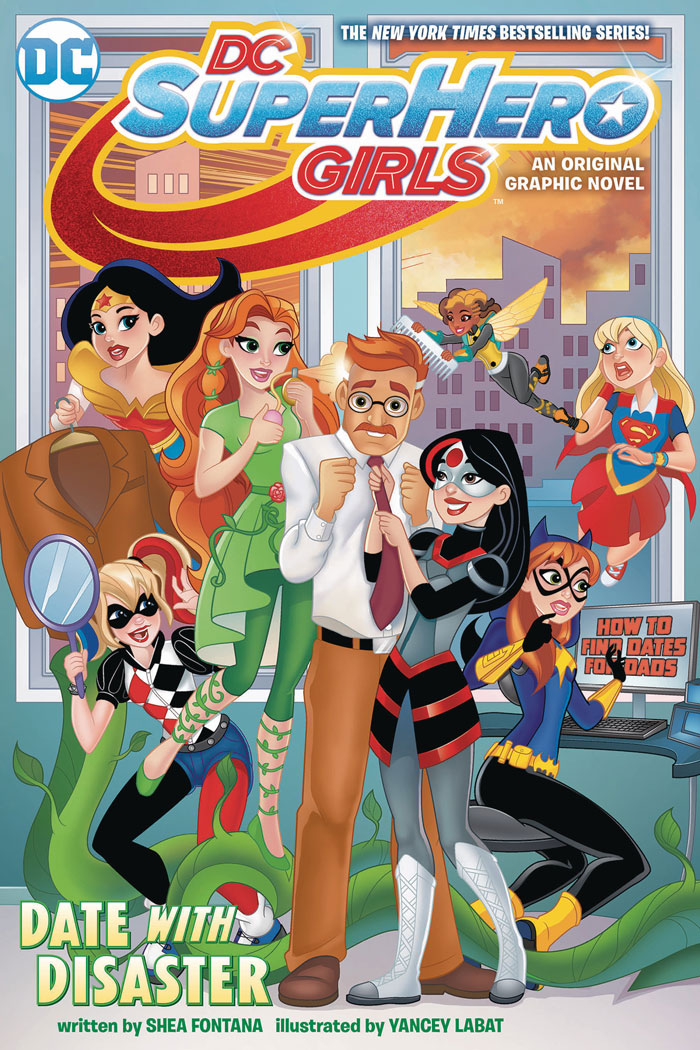 The school dance is coming up, and Batgirl is far less concerned with her own date than with her father’s. But a mysterious explosion at S.T.A.R. Labs takes precedence as Babs, Bumblebee, Supergirl, Wonder Woman, and star blogger Lois Lane try to figure out just what’s been happening between closed doors. Thing is, Harley and Ivy already know. This is the secret origin of Ivy’s plant powers!

Once again, DC strikes hard with an original graphic novel that not only focuses in on female characters, but one that is created for and about a younger audience — an audience that gets comparatively little attention in the overall market. So, the massive success of the DC Super Hero Girls line should be no surprise. Until recently, with the addition of Star Wars Forces of Destiny to the few collected editions of Moon Girl and Gotham Academy, these graphic novels largely stood alone as super-hero books targeted to young women in this specific age bracket.

“Date with Disaster” keeps up the tradition its predecessors set quite admirably, touching on dating — a topic I can admit I was dreading to see introduced to the line — in a really positive way for the most part. Fontana is wise to focus the bulk of the meaning behind the title on James Gordon’s dating life, and not his daughter’s, giving kids a fantastic primer on what it’s like to see a single parent going out with a new person.

And that’s just the beginning of what this volume accomplishes in terms of meeting real issues for kids, for the world, with good old-fashioned super-heroics. The centering of Lois Lane is a treat in any comic, of course, but when she gets to ask the question of why some reporters are given preference over others, you know Fontana truly understands the root powerhouse nature of Lois. In a month where women journalists are treated as second class during Vice-President Pence’s trip to Israel and April Ryan is mocked by a DHS figure and regularly ignored by the President’s Press Secretary, Lois stands as tall and as mighty as ever in these pages. She is undeterred and victorious in the end, as she should be.

The story touches on the idea of “fake news” quite eloquently in Jimmy Olsen’s contrary reaction to the events Lois is fighting to gain access to, and without beating anyone over the head with a “very special message” Fontana makes clear just how wrong it is to try to craft news to fit what you believe is true, leading to the truly conflicted character of Plastique.

Giving us at least one villain who is on the fence, who believes she’s been harmed and isn’t the real enemy, is the perfect example of just how nuanced these stories are, despite being aimed for a younger audience. Kids will get it. And so will adults. And that’s smart.

Labat’s art is beautifully consistent, giving readers an easy flow and dynamic action throughout. The character drawings are so like the style of the animation without ever feeling like stills from a moving picture. They hold their own on the comic page, but still exhibit the kind of crispness that cartoons regularly employ to attract the eye. Much of this is also thanks to Monica Kubina’s lovely color palette, that marries bold, bombastic primary colors with more subtle shades, particularly in illustrating Ivy’s origin and recovery (with Harley at her bedside, of course!).

The only disappointment, and unfortunately, it’s a rather large one, is what feels like deliberate choices (hopefully not) to prevent queer coding at the end of the graphic novel. In two pages, gay characters — who are both out in regular DC continuity — Bunker and Pied Piper are shown, not dancing together as the other couples are, but present and physically separated by Supergirl entering the room. I’m not sure I would have thought much of that, until the question of dates comes up for Harley and Ivy, to which Harley responds,

I don’t need a date! I got Ivy – as long as she won’t be a wallflower!

It’s one of those things that might pass the notice of a straight reader, but that a queer kid, especially one struggling with openness of their sexuality, will zero in on immediately: Harley had to specifically make sure everyone knew Ivy was NOT her date before she could dance with her. It feels very “No Homo” especially combined with the aforementioned Bunker and Piper placements, and a real puzzlement given this volume’s dedication to issues far more complicated for kids than just two girls or two boys being able to be couples at a high school dance.

Could Harley have just said, “I got Ivy!” and left it at that, without having to be explicit that it wasn’t a date? Easily. Would straight kids (and adults) never have given it a second thought, while queer kids would have been validated with almost no effort? For sure.

But she didn’t and they weren’t. And that’s a problem.

DC Super Hero Girls repeatedly braves territory that I think reflects the smarts of its creators and their dedication to addressing things that matter to the audience in question. I just wish in the case of “Date with Disaster,” more care was taken to at least allow the coding of queer content, even if having its direct presentation on the page isn’t a goal. Here’s hoping the next volume keeps this possibility in mind.