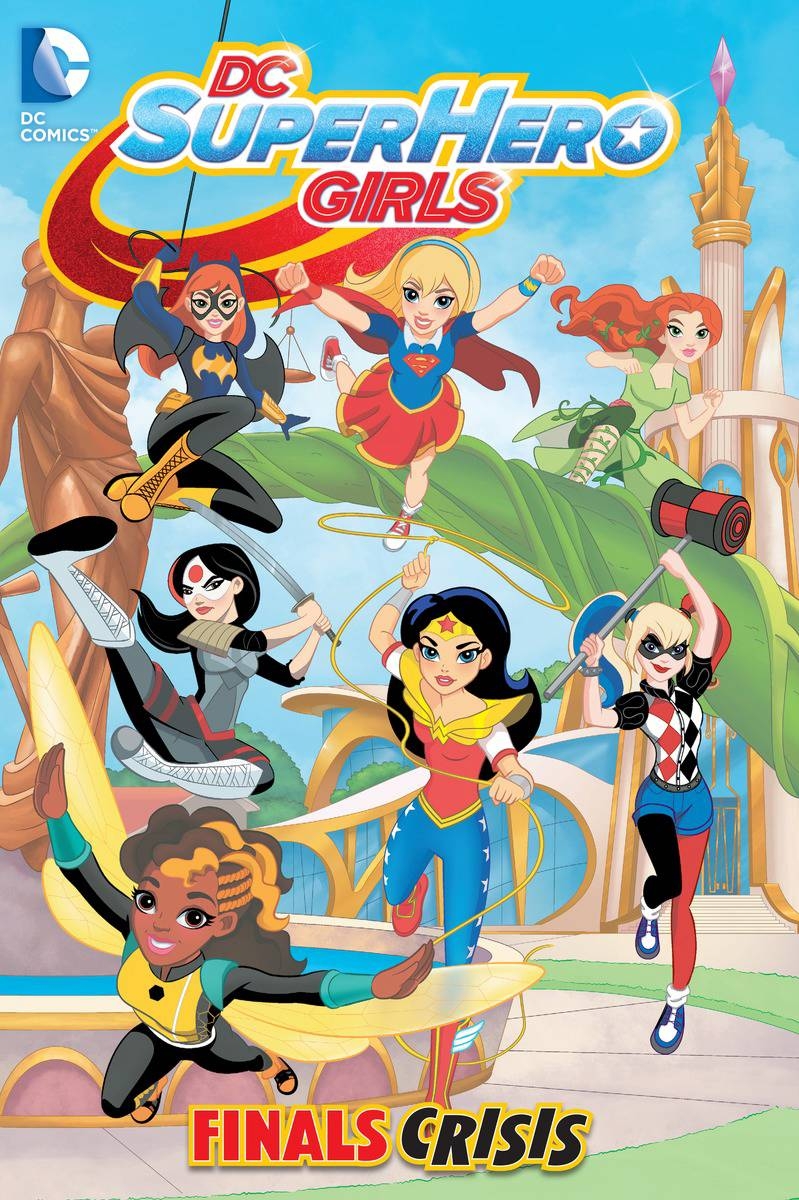 It’s the end of the semester and time for the girls to show Principal Waller and their teachers what they’ve learned. Students like Wonder Woman and Poison Ivy are pretty confident, but Supergirl and Batgirl each have their own troubles. But what happens when a mysterious armored man comes calling for the Super Hero Girls? Will Katana, Bumblebee, Harley Quinn, and the others beat him? And if they do, will they still pass their finals?

This needs to be said upfront: it doesn’t matter what I think about this comic.

I mean, yeah, I get it. It really doesn’t matter what I think about ANY comic in a big picture sort of way. Reviews are opinions, blah blah blah.

But in the case DC Super Hero Girls, it truly doesn’t matter because this book is not written and drawn for 41 year old, adult male me. It’s part of an entire campaign crisscrossing television, video, books, comic books, toys, and clothing that is made expressly for little girls. It’s one of the first stone throws from a major publisher known for years as directing content strictly for boys, then men, that I hope reverberates into a massive sea change.

For real, I love this comic, and I can enjoy its cuteness as much as anyone can. Batgirl has multiple Batcaves, y’all. Each one is more hidden and comfy than the one before it. Supergirl is a massive klutz, but loves her horse Comet. Who doesn’t want a white horse named Comet? Bumblebee is a) anywhere in a comic, and b) really into honey lattes. I WANT A HONEY LATTE.

But the real trick performed by Fontana, Labat, and Kubina is how they craft each girl to be self-sufficient and still have genuine flaws that rise out of enthusiasm and self-confidence, not snark or self-doubt. How many comics, even comics for kids, pit girls against each other, drive wedges to push the narrative, or prey on deeply physical insecurities to teach lessons?

There’s none of that here. Sure, Supergirl struggles with the repercussions of bullying from her earlier years on Krypton. But it’s the contrast between that behavior and the one modeled by the stars of the title that drives Kara’s motivation to prove herself. She’s already seen a better way. She sees the flaw in the bullies’ behavior. And she’s going to kick some butt.

I think it’s clever too how the creative team brings along Ivy as a somewhat villainous character, while still making sure she has endearing qualities and is willing to work with the other girls as a team. Honestly, that was the role I expected for Harley, but I’m pleasantly surprised to see that kind of complexity in Ivy’s motivations.

All of the main seven characters get their own chapter, a chance to showcase what makes each of them unique and endearing, but other characters aren’t given short shift either. Beast Boy in particular is well developed, and to a lesser extent Starfire, Lady Shiva, and Hawkgirl. It’s really a broad world that Fontana is developing here and in animation, with nearly limitless possibility.

And that’s exactly what girls need. Limitless possibility. It’s what drew me to comics as a little kid and bolstered me through the hardest times in my life as a teenager. Comics were there for me then. I want them to be there for little girls now.

So, assuming you’re not a little girl reading this review yourself (and if so, please do not click through to my column from last week where I swear a lot), do me a favor. Buy a copy of this book and give it to a little girl. If you want one for yourself, buy two. But get this in the hands of the people who need it most. Do it. Do it. Do it.