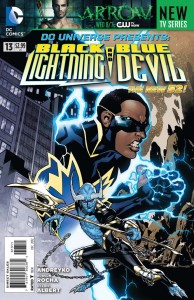 It’s the New 52 debut of two perennial fan favorites — Black Lightning and Blue Devil! As the two novice heroes butt heads in the Los Angeles streets, a greater threat arises in the very large form of Tobias Whale. The stakes get very personal, very quickly, as both Jefferson Pierce and Dan Cassidy have a lot more to lose than their pride.

It is truly excellent to see Andreyko back on a DC Comics book after his stellar (and grossly underappreciated) run on Manhunter pre-New 52. Given how well he handled the crafting of Kate Spencer and her supporting cast, I can’t imagine a better choice for the writer to reintroduce two of DC’s mainstay C-list (but much adored) characters. Andreyko’s Black Lightning is still the ultra-serious, super responsible Jefferson that we’ve known for years, just significantly younger and back to his early days of teaching high school. His Blue Devil is still a wisecracking, go-lucky guy in a borrowed suit who retains the edge of mysticism about the character many fans came to appreciate in later years. One could even argue that not enough about each of these characters has changed for a universe dedicated to refreshing older concepts with entirely new spins.

Believe it or not, I’m not going to make that argument. Andreyko’s decision to retain the core of Jeff and Dan’s personalities is a smart one for characters that haven’t had as many successful iterations as their more iconic counterparts. What is presented as new, however, is their pairing — a combination I never would have imagined but seems just so right on the page. Even just in this initial chapter of a four-part tale, Black Lightning and Blue Devil exhibit enough difference in personality to generate significant banter and conflict, without devolving into caricature. And frankly, it will be nice to have another set of buddies around the admittedly chronic seriousness of the current DC Universe.

Rocha’s pencils are clean and crisp, although neither disappointing nor outstanding — with one notable exception. His rendering of the new Blue Devil garb (for as long as it remains simply garb. We shall see!) is absolutely stunning, particularly on the last full page panel of the issue. I came into this comic as a huge fan of one character, but left perhaps even a bit more impressed by the other as a result. That’s a pretty mean feat. His Tobias Whale is appropriately grotesque and Los Angeles suitably grimy, even having silhoutted leaves pepper backgrounds as the equivalent of floating ash. If anything, I’d just like to see a slightly more dynamic Black Lightning, reflecting the Olympic level athleticism I believe he still maintains in this brave new world. Nevertheless, this is a brilliant start to what I hope is a bright future for the Black and Blue in the DCU!