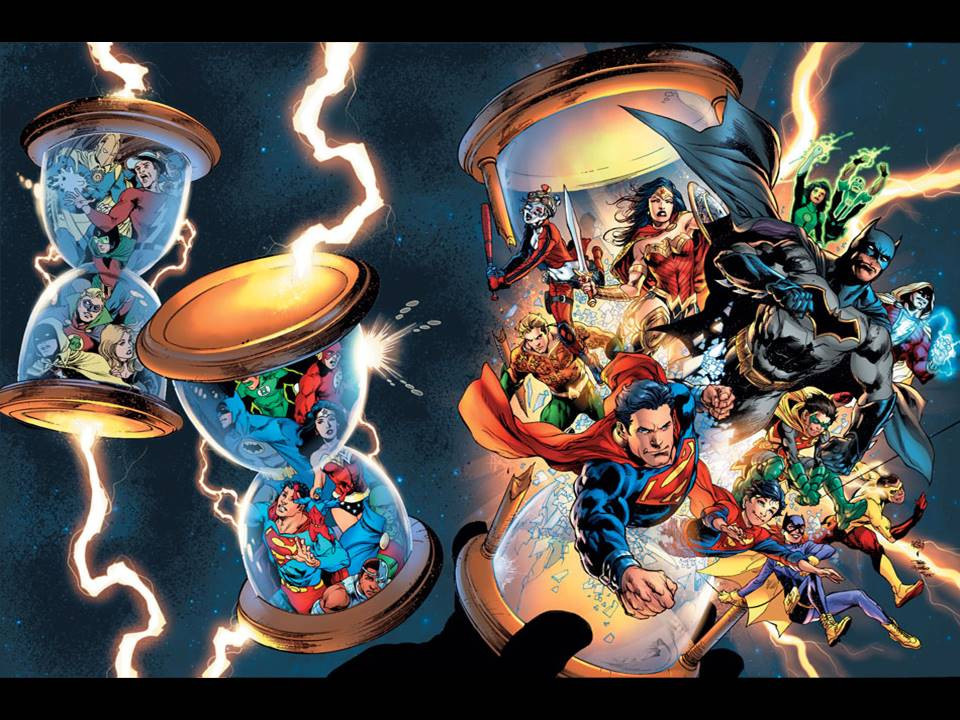 Legacy! What is a legacy? It’s planting seed in a garden you never get to see.

In Big 2 Comics, that is surely the truth. DC Universe: Rebirth kicks off a new rebooted continuity, still tied to the old one by the observations of a long lost hero. He’s been watching the whole mess, and remembers everything. Flashpoint. Final Crisis. The Crisis on Infinite Earths.

His name is Wally West, and he’s the Fastest Man Alive.

You can’t really review Rebirth without spoilers, because the cast is the showcase — at least, at first blush. A lot of long lost faces that fans have been clamoring for since before Flashpoint have returned: Wally West. Ted Kord. Ryan Choi. Ray Palmer. And there’s a theme with these reappearances: legacies. Ted training Jaime. Ray and Ryan working together. Jessica Cruz paging Hal Jordan. Lois and Clark, Dinah and Ollie, Mera and Arthur.

If there ever was a man who celebrated the entire DC catalogue, it was Geoff Johns, the man who reintroduced Johnny Thunder to the masses.

It’s probably not a scandal to say that Geoff Johns was not enamored of the New 52. He’s gone on record more than once as objecting to the idea — especially since, at the time, he was moving into Act III of his Green Lantern epic. He’d just put years into building his mythos, and it makes sense he wouldn’t want to abandon that effort. So, of course, he didn’t. GL stayed GL, even while the continuity around it changed into something … darker.

Lots of dead parents, and broken relationships, and no more sidekicks unless they can swing a sword.

Rebirth is many things, and one of the most significant is a thematic “I’m sorry” for the darkness of the DCU in recent years. Attempts were made to lighten things up — Batgirl of Burnside, Gotham Academy, Black Canary, Grayson, Midnighter — but something more was missing. In a publishing slate where Midnighter is one of your only smiling heroes, there’s clearly something gone wrong. Is Rebirth the answer to that?

If legacies and relationships are actually celebrated and utilized as fertile storytelling tools, then yes yes yes. I won’t pretend I wasn’t moved close to tears at the sight of Wally West riding the lightning again. It plucked all my delicate fangirl heartstrings. As did seeing some of the people I’ve missed.

But the promise may be a false one, if we are to take the hints of what’s to come at face value.

Already, the seeds of the next Crisis Event have been planted in the form of Dr. Oz. Oz being, as revealed on the final page, a likely homage to Ozymandias. Yes, the characters of Watchmen are being brought into play in the form of Dr. Manhattan, who mused about creating universes of his own at the close of the series.

Watchmen is the deconstruction of 4-color cape comics, perfectly executed in rich detail and depth by Alan Moore and Dave Gibbons in 1987. The story is dark, brutal, and bleak. It’s strange, then, that the deconstruction would be feeding into the reconstruction. Everything is cyclical, but I’m not sure there’s hope to be found in the sinister machinations of beings who, in every possible way, failed to live up to the mission in front of them: be heroes, save people, protect the innocent.

If this new universe is birthed of darkness, and if Wally West is terrified of what’s coming — the man in charge — I would argue that the smiles are a veneer over a rotten tooth. It also, in my mind, cheapens the greatness of Watchmen, but that’s another article for another time.

Similarly, the different artists don’t feel in sync with one another from story to story. The clear, open faces by Gary Frank look strange beside Ethan Van Sciver’s heavy scowls (and the difference in linework between them is astounding. Frank’s lines are clean and sharp, while Van Sciver’s characters are variable and rough. Frank’s style is much more complimented by Phil Jimenez, who shares Frank’s gift for bold, expressive eyes.

Ivan Reis exists somewhere in between them, delivering his standard quality work that is very robust, anatomically sound and always superheroey. There doesn’t seem to be a clear reason for why each artist got their respective pages, beyond they’re all big fan-favorite names. It would have been nice for a clearer link to the “Lost/Legacy/Love/Life” themes.

Every colorist on the book earned their money and then some, because it POPS like a cape comic should. Wally’s lightning binding the story together was a great motif. Beautiful, bright colors seem the right choice for a book apologizing for five years of darkness, and especially after the drab, grey slog of Batman V. Superman.  Hats off to Anderson, Wright, Hi-Fi, and Eltaeb for adding optimism to the work.

Rebirth has a lot of promise, and hearkens back to comics that a lot of readers, including myself, have truly missed. But if the “long game”, as Mr. Oz calls it, is just another in a cycle of crises, each more frequent than the last, then the joy of this book may be short lived. But hey, at least Captain Boomerang was in it. That’s really all that matters.*

* The author wishes to thank Geoff Johns for his ridiculous devotion to her favorite garbage character.