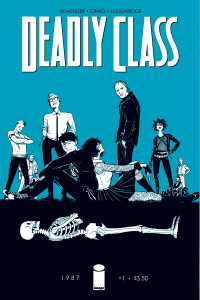 Rick Remender continues to ride his red hot creative streak right into 2014 with the launch of Deadly Class. His second foray back into the creator owned world of Image Comics in as many months is the story of  King Dominion’s School of Deadly Arts, and the students destined to be the world’s greatest assassins. Joined by artists Wes Craig on pencils and Lee Loughridge with with colors, Remender and company kick off the brand new series with a slighthy unexpected, but nonetheless exceptional debut.

In the first issue of Deadly Class readers are introduced to homeless teenager Marcus Lopez and in the first half of the issue are shown highlights of his struggles to survive on the streets in an eleven month span from January to November 1987. The decision to spread out the introduction to our protagonist over an extended amount of time serves a dual purpose, as there is a reason in the plot that is revealed as the issue progresses, and it builds his character through montage in a way that is far more effective than just saying that he is homeless. Remender quickly runs through different months of the year that show just how tough life is on the street. We are reminded as the text tells us what month it is page after page early on in the that this isn’t just a temporary situation for Marcus as we see him begging for money in the cold January weather or fighting with a man trying to steal his sneakers in April, but no matter what happens he always feels as if he is being watched. Throughout this first part of the book we are given hints and a few concrete details about Marcus’ life, but it seems as if Remender purposefully doesn’t reveal too much information. It works out very well as we are spared an over zealous info-dump that has become all too common in first issues, and it allows the few poignant words used to make a bigger point.

This book, especially the first half, is extremely dark. There are references to Reagan Era (remember this issue is set in 1987) cuts in mental health funding that left too many mentally ill patients deinstitutionalized and homeless on the street, and there is a graphic nightmare scene where Marcus recalls witnessing a suicide. There is also a scene where suicide is contemplated, and some lines that are signs of major depression are thought by our main character. For some people, these parts of the issue may hit too close to home. It is an emotional issue to read, and it is great to see that the creative team did not sugarcoat anything. There have been too many instances in comic books where being in dire situations are glanced over, but that is not the case here. There are obvious correlations in real life between mental illness, homelessness and suicide, and Remender is making a very powerful social point by just acknowledging that his homeless main character is almost assuredly suffering from a mental illness in the form of major depression.

The second half of the book moves quickly and we see things may not have been what they seemed over the course of the eleven months, as a character steps out of the shadows and the fun begins. For as deep and heavy as I found the first half of this issue, I found the second, action packed, half to be just as awesome in different ways. The final half of the issue reminds me of the first issue of Remender”s other current creator owned series Black Science in the ways that the reader is treated to really awesome action scenes that feel vital and frantic because the reader doesn’t know what is going on. The fact that we were introduced to Marcus before action kicks in had me more invested in the character and as a result I was trying to figure out what the heck was going on much moreso than I was while reading Black Science. When the dust settles after some truly breathtaking action scenes we meet a few more of the supporting characters, including Mr. Lin who brings what the book is ultimately about into focus, a school and new home for Marcus. Remender has proven to be a master of stringing along questions and answers in a convincing way, as we still know very little about Marcus and why he caught the attention of Mr. Lin and King Dominion’s School of Deadly Arts. It was smart of Remender however, to put the initial focus on Marcus outside of the school, and to give his character a little bit of moral high ground. If the story had started inside the school without seeing the hardships Marcus experienced it would end up being extremely difficult to have the readers empathize with any of the characters.

The art in this issue was absolutely stunning. To be completely honest, I remember not being very fond of Craig’s pencils in Batman Annual #2. It isn’t that they were bad, but it just seemed so plain and dime a dozen. That is nowhere close to being the case here as the work Craig provides in this first issue screams future superstar. The style Craig and colorist Lee Loughridge have developed for this series feels like it would be right at home on a book like Marvel’s Hawkeye or Young Avengers while still being fully original. The design of the panels on each page are phenomenal with the best touch being the tilted panels during a chase to help signify speed. Given that a genuine sense of movement is the hardest thing to accomplish on a static page, it was a brilliant touch. Then the same thing can be said for the chases themselves and  choreographed action scenes. Two pages in particular stand out to me in the entire issue as prime examples of just how good Wes Craig is. Without venturing too deep into spoiler territory, the first page featured a foot through a windshield and the second a crashed bike. As much as I loved the art this issue,I can only imagine how great a job Craig will do as the books moves inside towards the school where we can see all sorts of new designs.

Deadly Class #1 may not have been exactly what I expected the first issue to be when originally reading the premise of the series, but I feel it turned out even better than I could have imagined. This book had it all from social commentary on mental illness to some jaw dropping action scenes and was just perfectly stylized with all around beautiful art. On top of it all Remender managed to somehow ignore the hook of the series until the very last page of the issue, introduce some very compelling characters and give us just enough information about said characters to make us want to find out what lies behind the mysteries. Deadly Class is on its way to being another Rick Remender special, and that my friends is good for comic books.