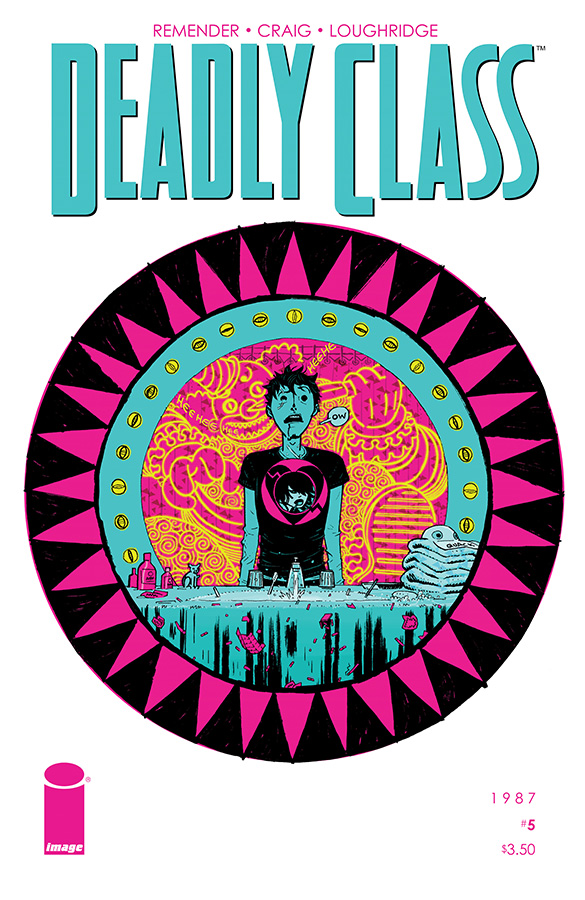 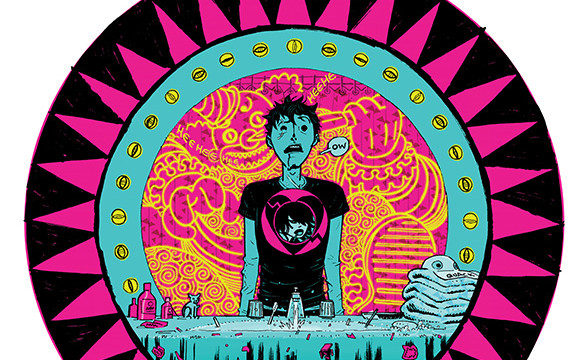 Drugs. Drugs have been the catalyst for adventure and drama in these last two issues of Rick Remender, Wes Craig, and Lee Loughridge’s absolutely fantastic Image series Deadly Class. It’s a little bit Fear and Loathing in Las Vegas mixed with a lot of Remender’s personal experiences. However, Wes Craig’s jaw-dropping visuals might be the true star here. We’re only five issues deep and in my opinion if the series ended right now it would be considered legendary. The series has been a loving look back at a time period that clearly means a lot to Rick Remender. The formative years. It’s those years when everything felt life or death. The years when fitting in and looking cool was vital to life. With Deadly Class Rick is exploring these feelings with true life or death stakes. Sprinkle in a little acid (or a lot of acid) and you’ve got yourself a compelling, endearing, fun, funny, sweet, messed up, beautiful, comic book.

Marcus and the gang are in Vegas. Their mission: kill Billy’s dad. His dad is a degenerate gambler who left his family abruptly, only to reappear years later to make their lives even worse. Billy wants Marcus to help kill his dad because word as spread of his killing of Rory the homeless man. The problem: on the way there Marcus took a bunch of acid and now is holed up in a hotel room tripping balls. Before Marcus can really think about it he’s entrenched in another brutal murder followed by a hypnotic chase through the Vegas night. Remender places us into the mind of Marcus. We read every thought and see every hallucination. It’s all beautifully illustrated by Wes Craig and colored by the master Lee Loughridge. This is a perfect melding of writer and artist. Remender’s expressive writing is matched by Craig’s gorgeous expressive pencils and it’s evident that this book means a lot to them by the sheer amount of artistry and passion on display. Nothing is being held back and it just explodes off the page.

Marcus would be considered a bad person by most people. He is a murderer. Yet I have found myself deeply engrossed in his story, relating to many aspects of what he is feeling. The credit of this achievement goes to Rick Remender and his ability to make Marcus a fully formed human. He is a product of life’s circumstances. His parents were killed. He was forced to live on the streets for many years. It has given him a tough outer shell. Introducing Marcus to an experience with acid has given Rick Remender the opportunity to remove that shell and let us readers see his insecurities. Initially I was worded this road trip to Vegas would be a detour from the main story, more a fun aside and not substantial. However, that is very much not the case. This Vegas trip has been a culmination of everything that was seeded in the first three issues. It has all built to this and these are the best of the series so far.

Wes Craig is one of my favorite new artists. With Deadly Class #5 we get another beautiful issue from Wes that is complimented by Lee Loughridge’s colors. Marcus’s acid trip has been the perfect venue for Wes to really go all out. He changes his style from panel to panel, alternating techniques consistently. I almost wish Marcus was on acid constantly so we can have these absolutely uniquely creative pages every month. His art will make you fall in love, break your heart, terrify, and amaze you all at the same time. There’s one panel right after Marcus and Billy end their confrontation with his dad that was one of the standouts for me. As they walk back to their room, pieces of Marcus are falling away as if he’s not solid anymore, barley being held together. It’s a beautiful effect that perfectly captures the moment in an inventive way. Another standout page is where Marcus is tackled through the 7 Eleven window by Maria’s crazy boyfriend. It is such a great use of the page turn, a technique used to surprise readers that many books don’t take advantage of. It’s a shocking visceral page and it’s everything I love about comics. Lee Loughridge on colors gives the book even more personality. He gives each scene a specific feel that complements the writing and pencils. The Vegas backdrop and the acid trip gives him, much like Wes, an opportunity to really go all out and have some fun.

Enough good things cannot be said about Deadly Class. It’s a book that can make people fall in love with comics. Rick Remender, Wes Craig, and Lee Loughridge’s Deadly Class #5 is a glorious acid soaked trip through Vegas. It’s clear that any time spent in this world is going to be a good time.