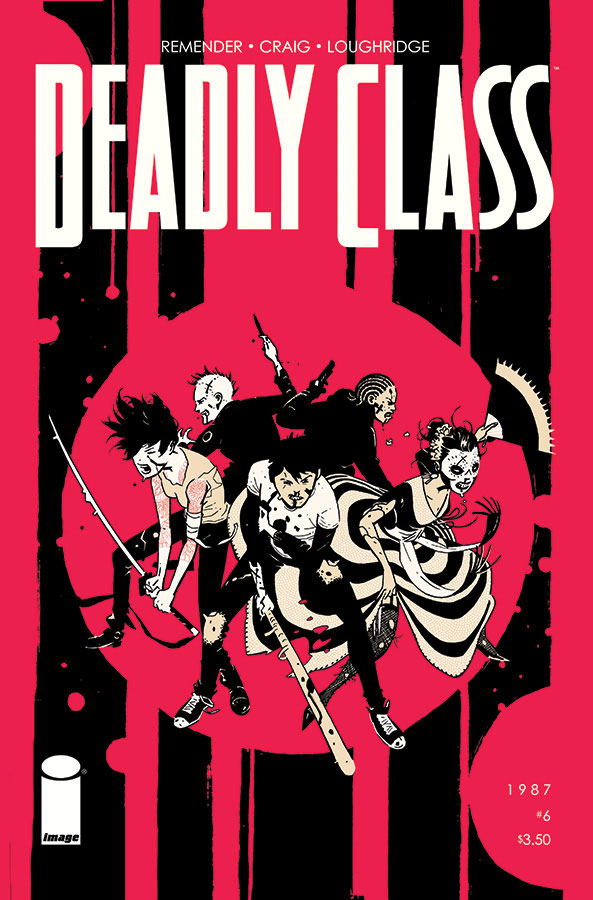 The first arc of the series comes to an end in this issue of Deadly Class. We continue our journey with Marcus and his motley crüe of teenage assassins as they slowly discover that what was intended to be a recreational escape to Las Vegas amongst friends, ended up being a lot more than they can handle as they embattle alcohol, debilitating acid trips, patricide, rampant sexual tension, and jealousy. If you thought your teenage years were tough, imagine doing it enrolled in a deadly school for assassins where the students rarely show any respect for outside authority and are more than capable of killing those that challenge them.

We follow Marcus as he is chased and beat down by his nemesis Chico. Chico is a popular and relentless thug and is everything Marcus is not, in practically every aspect of his personality. Unfortunately for him, his girlfriend Maria has been having eyes for Marcus. Unfortunately for Marcus, Chico can’t allow a disgrace or embarrassment like that to happen, not while one of them is alive.

Rick Remender creates such an genuine world for his characters, even when it’s amongst such a surreal premise. The stakes are seemingly small but are aptly glorified to the magnitude that many teenagers often do. Minor occurances in daily life are exacerbated to hyperboles when looked at from mature perspectives. It’s not uncommon for teenagers to routinely talk in terms of life and death when matters of fashion, music, or love come into question. What Remender does in Deadly Class is make these occurances a literal matter of life and death. Not only are they actual matters of life and death, but we have characters that are exposed to their bare bones in an outlandish setting that captures the readers into the experience by the sheer fascination of it all.

Undeniably, this issue is a shining performance for artist Wes Craig. His pencils and composition are astounding to admire as he employs dynamic panels on each page that demonstrate how sequential art can shatter the banality of a word like “sequential” and transcend it to the upper limits of style and cool that one would expect from an independent director of cinema. Craig takes calculated risks in his artistic storytelling and it pays off two-fold as the visceral tension he composes and action sequences he renders are painfully felt in every stab, push, punch, and angry kick to the face. Colorist Lee Loughridge has the daunting task of keeping up with Wes Craig’s creative aesthetic, and does so with sufficient compliance and authenticity. Dark alley fights maintain their gloomy blues, blacks, and reds while reaction sequences of panels and vignettes are featured with visual filters that bring a deliberate potency to the page.

As much as Deadly Class is an homage to the time period of the 1980’s, it’s also a surreal dedication to adolescence and the growing pains of emerging into adulthood, when you have been spawned from the outskirts of what’s normal. Deadly Class is the comic book equivalent of sunglasses, a black leather jacket, and a switch blade: bad ass, cool as f***, and dangerous. This issue delivered a more than satisfying end to it’s first arc, and has yet to lose steam. By the last panel, you realize that Deadly Class #6 has broken out of orbit and is officially on it’s own course. Needless to say, I am undoubtedly there with front row seats salivating for what’s next.