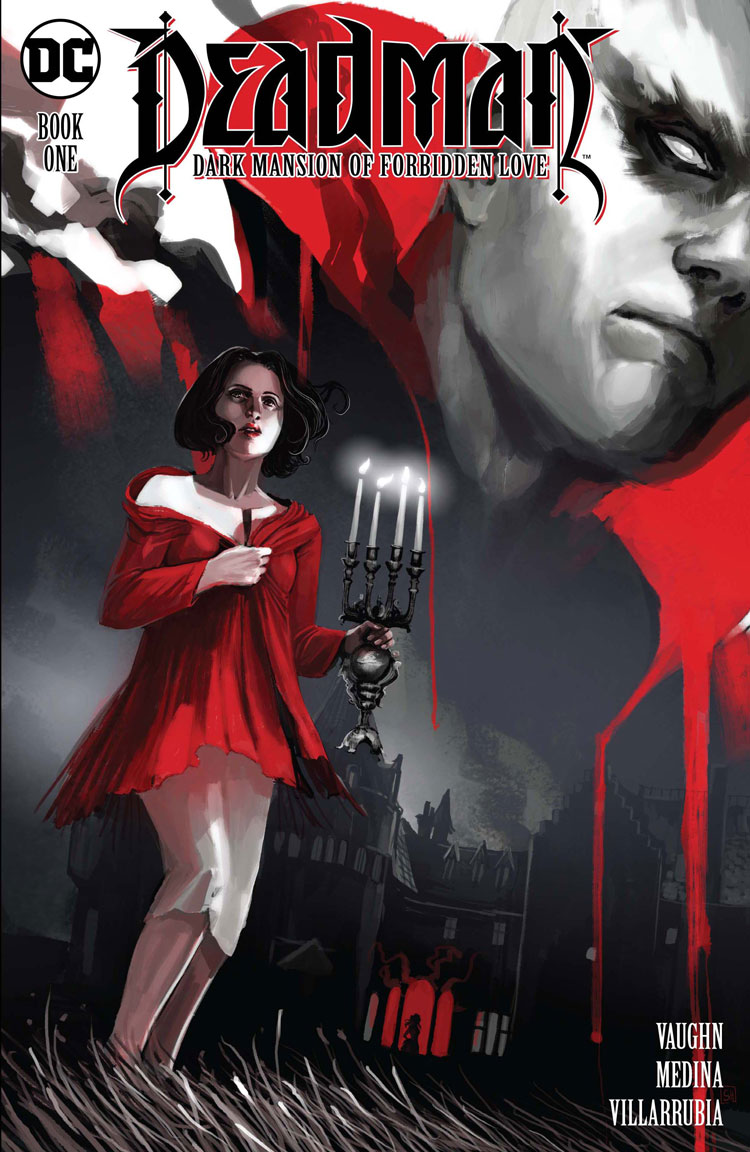 Deadman: Dark Mansion of Forbidden Love #1 brings readers something similar in the beloved Prestige Format from the 1990s, and clocks in at 40 pages of supernatural noir romance. Written by Sarah Vaughan, drawn by Lan Medina, colored by José Villarubia, and lettered by Janice Chang, the comic has no ads, save for the DC All Access page on the inside back cover and is conservative in its use of splash pages, with only three throughout the issue.

Vaughn puts the reader right in the story from the first panel, opening the story from Berenice’s perspective. Berenice becomes our gateway, to the story, to Glencourt Manor, and to the supernatural mysteries that have brought her and Deadman (Boston Brand) to meet.

The cast is lean, with only five characters present in the issue (eight if you include Berenice’s parents and ex-girlfriend who appear in flashback scenes) so the story is able to climb into the characters’ experiences, unpacking them in first-person narrative through caption boxes or organic conversation in dialog. Smart move by Vaughn to put Berenice’s tale up front, giving her both purpose and meaning in this Deadman adventure.

As Vaughn demonstrates, Deadman just might be one of DC’s most versatile characters, capable of fitting any story type, with just enough wiggle room to adapt to his surroundings and supporting cast, gaining depth and appreciation in the process.

Deadman: Dark Mansion of Forbidden Love #1 takes Deadman out of anything even resembling familiar surroundings. There’s no circus, no Batman, it’s not in Nanda Parbat, and the darker Justice League is nowhere to be found. But it all still works. Berenice presents a mystery to Deadman. The mansion presents a challenge for them both. All of it connects, but Vaughn only gives enough to get this story rolling, as she finds a cliff to hang the last page on.

Throughout the issue, the visual trio of Medina, Villarubia, and Chang keep the story grounded, but mysterious. Medina packs details into every panel, be it the bricks outside Glencourt Manor, the vintage of Sam’s truck, or the subtle range of expression packed into the day as Berenice tries to discern the changes sneaking into her life.

Medina spends a little time in Deadman: Dark Mansion of Forbidden Love #1 defining the right depictions of Berenice, Sam, and Nathan, each with individual duration, but Medina has Deadman locked in from Boston’s first panel. Some of the perspective gets a bit weird, as Medina wants to show the readers every single detail in every single piece of scenery, but the storytelling is smart enough to accept any perspective variance.

Villarubia’s colors are more than just hues, as he adds depth and texture, dimension and temperature. When the shadowy threat comes into the story, Villarubia dials up more blues and grays, and he finds a bold way to communicate Deadman’s body possessions in complete collaboration with Medina.

Just as Villarubia does with the colors, Chang brings definition in the lettering. Boston and Berenice have different caption boxes, with Boston’s being crimson colored with white type and Berenice’s are mixed case, showing readers a calmer, more cautious voice.

The format walks a tightrope between current standard format comics and the prestige comics of yesteryear (how long has it actually been?). It comes real close to falling off that tightrope, however, as the cover stock isn’t rigid enough to give the book significant durability. Additionally, the cover ink has a tackiness to it that simply shouldn’t be, making Deadman: Dark Mansion of Forbidden Love #1 feel more like an oversized slight upgrade instead of top of line product.

Luckily the story and art overcome the production quality shortfall, giving readers a nice opening chapter. Deadman: Dark Mansion of Forbidden Love #1 isn’t isolated from Deadman’s history and existence beyond this issue, but it also doesn’t wallow in history, choosing instead to exist for now, and to give the readers a strong sample of one avenue Deadman stories can take while offering up consideration for other genres. I’m glad to see Boston Brand back in spectral action, and Vaughan, Medina, Villarubia, and Chang give readers a nice, neat read.