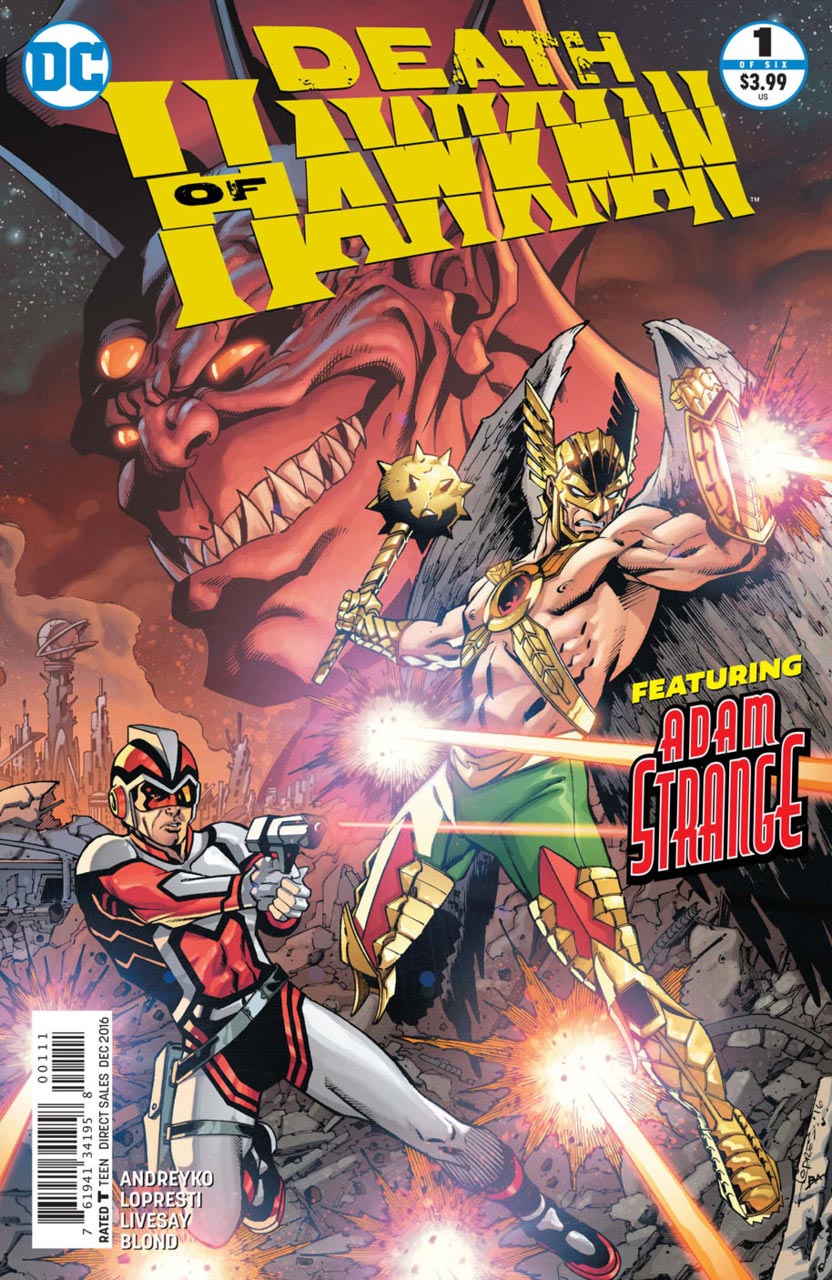 After I finished reading Death of Hawkman #1, my first instinct was, “That’s an odd title for an Adam Strange comic,” but then I took a deep breath, remembered this comic was originally introduced to the general public as Hawkman and Adam Strange: Out of Time.

Writer Marc Andreyko and artist Aaron Lopresti give readers a succinct summary of who Adam Strange is in Death of Hawkman #1. Andreyko only identifies Hawkman through Strange’s dialog in the opening scene, and, at no point in this issue, save for the random uninspired appearance of two Thanagarian wingmen, does Hawkman factor into this comic.

Another Rann/Thanagar War or Adventures of Adam Strange would be more fitting titles for this issue. With that out of the way, Andreyko does give readers a personable Adam Strange. He also buries the lead.

The opening scene depicts Adam Strange helping Hawkman, who we are supposed to believe is gravely wounded. Strange exclaims that the Winged Warrior has lost, a “gallon of blood,” as the scene shows a stream of red liquid flowing behind the moving feet of Strange and Hawkman. Lopresti’s drawing of Hawkman is muscular and idyllic, with three arrows (that are less arrow than oversized dart) sticking out of various points while colorist Blond applies marinara patches that should become lacerations for us readers.

These wounds are, by Hawkman standards, superficial and underwhelming. Even without the Nth metal’s healing capabilities (presuming Nth metal been nullified for story’s sake, even though we are not told as much), these wounds are nothing that Katar Hol/Carter Hall/whatever-iteration of Hawkman this post-New 52/Rebirth-era DC Universe hasn’t gotten over before.

Death of Hawkman gets a bit wobbly, even in its Adam Strange-centeredness. When Strange is tracking the Zeta beam, his travels take him to compass points in the DC Universe – Metropolis, Gotham City, Belle Reve, St. Roch (which was the pre-Flashpoint home of Hawkman) – all presented in widescreen, unnecessarily so.

Adam Strange spends two pages at DMV, waiting to renew his driver’s license. And another at a diner. Andreyko gives Strange plenty of character bits in those pages, and Lopresti makes it all look crisp and slick, with Livesay on inks and deep colors from Blond, but none of those pages have anything to do with Hawkman.

It’s not that Lopresti is doing any of the storytelling wrong, it just seems like there were plenty of opportunities for dynamic choices. He’s answering the bell and fulfilling his assignment.

I know, I know, this is the first chapter of a six-parter, but it’s also 17 percent of the story. As we can all see from the cover, Despero has a role to play in this series, which might explain the lackluster Thanagarian appearance, but this issue could have used a bit more conflict or even some action.

I’m willing to give this issue a free pass, as I trust Andreyko as a writer, but for my four bucks, I really expect to get a little more Hawkman in a Hawkman comic. Had Adam Strange remained a co-headliner, then this issue would have more significantly more legitimacy. As it stands, it’s more a prequel (and we all now how those go) to the action soon to erupt in the pages of the next few issues of Death of Hawkman.