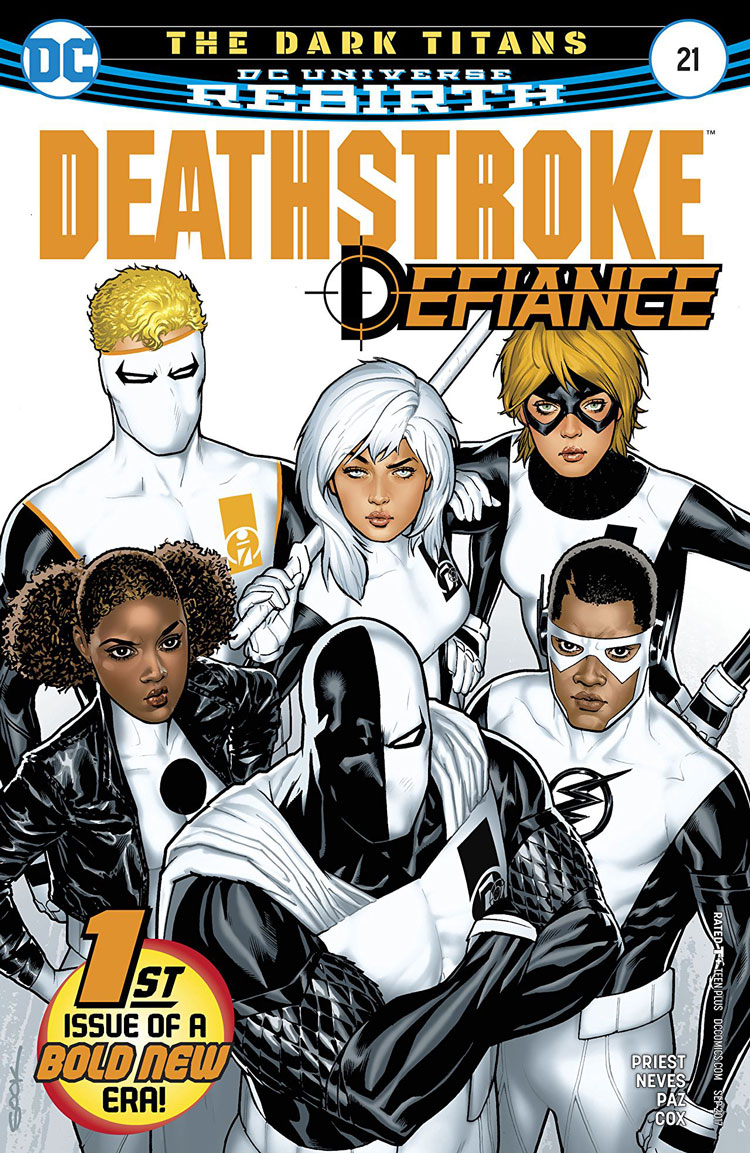 The stage is set for a new age of Slade Wilson and no one thinks the world is ready for it. The cover for the new story arc exclaims it’s the start of a bold new era and Priest delivers while continuing older Deathstroke plot lines and giving us one last kill before the new era is officially ushered in.

The opening pages focus on what possibly could be a new player in Slade’s world and the woman in question (going by Willow) makes herself known rather quickly. Conversation escalates into a gun toting, weapon wielding firefight that ends just as it begins. It’s a quick sequence that let’s Neves goes for a detailed, intimate, close-up fight of our mystery character against a small force of bandits in a food locker. It showcases her ability to adapt and take a punch when the going gets tough.

Neves keeps the focus on the crashing and moving bodies with Cox’s colors never being distracting from the action and Schubert’s lettering strengthening the action and sounds of the guns and blasts that are taking place. It’s a detached side-quest that opens the door for the rest of the issue that expands on the final page of the last issue. This is quality time with the members of Team Defiance and the underlying espionage that could ruin Deathstroke’s new found happiness before it has time to blossom.

Slade’s ex-wife Adeline is still a very prominent player in the world that Priest is carving for Deathstroke and company — and the project which Slade is now a part of has everything to do with it. She believes that between the government backing her and connecting with Wintergreen, Slade’s newfound better lease on life should prove fruitful in her favor. Project Defiance is Adeline’s in nature, but we all know Slade has ulterior motives for forming the team he has.

Thanks to “The Lazarus Contract,: Priest might have taken Deathstroke down the route Batman has recently taken in Rebirth as of late. This new direction could be (in his own way) Slade’s preparation for training the next generation of heroes after what he’s seen in the Speed Force.

His own direction is furthered when his method of picking signs for a suitable mission for his team is watching TV and looking for a dangerous international disaster to help stop. Priest shows his knack for writing characters of all ages with pairing members together and giving them their own sequences to update readers with where they’re at right now since they have their own plots and stories for joining the team.

Kid Flash expands on his choices and what led him down the path to collide with Deathstroke and Power Girl gives him someone to bounce off of, being both a fellow ex-Teen Titan and a fellow team member. Likewise, Jericho and Rose have more personal reasons for joining their Dad’s team. Jericho has bad blood left over from the previous arc and the mystery of what happened to his wife is hanging over his head that’s fully aware by those close to him.

Neves draws every character differently and covers different emotional beats given the moment and there’s even a last burst of action which could be the last time we see Deathstroke in his traditional orange and black suit for awhile in a hilarious moment of Slade getting his final kill before renouncing it altogether. Schubert delivers on the lettering

Throughout his run, Priest has weaved a complicated world for Slade Wilson and company and that continues into his new status quo with “Defiance.” We have ongoing plots bubbling to the surface and with Slade’s new sunny disposition and the final member of his team playing for the other side it’ll be interesting to see how Slade and his new state of mind fairs long term.

The appreciation for the design work of the Defiance Team can’t be understated because they look great with a splash page almost all of them in their full glory as their mission finally getting underway. The inking by Paz adds to the colors by Cox letting the characters stick out through the backgrounds and still keeps the facial work tight.

Every person on the creative team does their job pitch perfectly and it shows in the characters and the directions they’re going. Despite the issue being one final preparation before ushering in the new era by setting the characters up and getting into who they are and what they mean to Deathstroke, it’s still a great read!