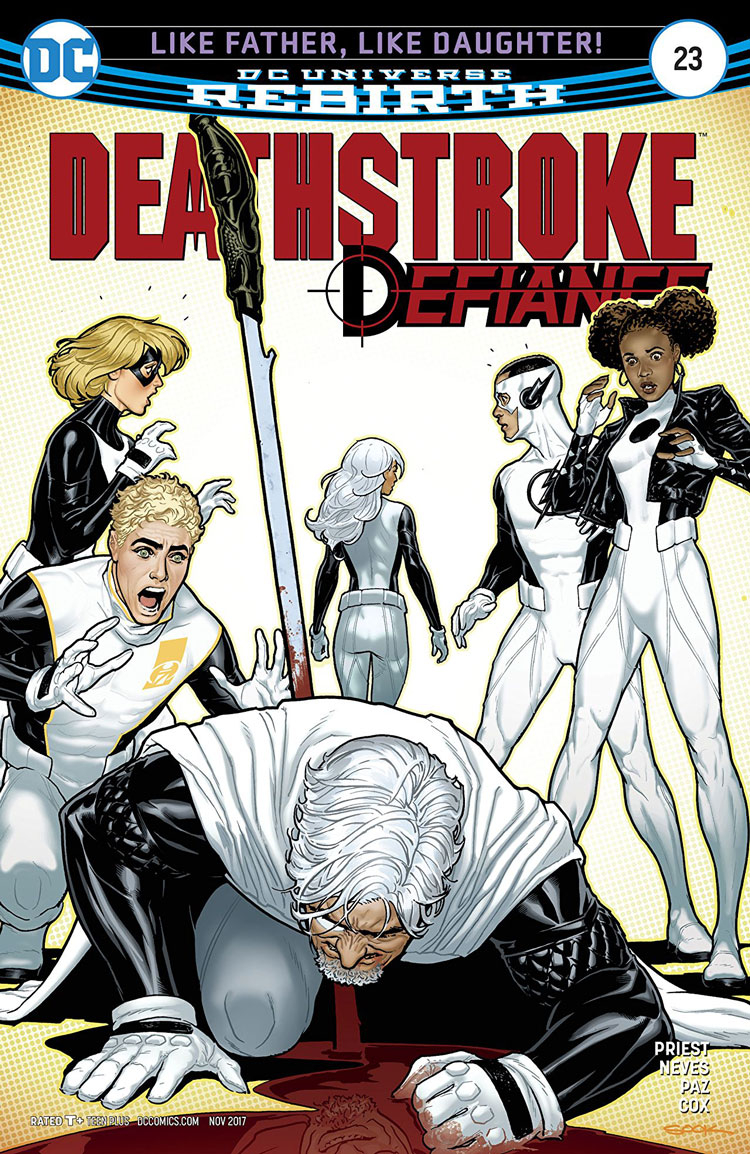 The new era of Deathstroke picks up pieces from the past as that very thing comes back to haunt the Wilson Family in the wake of their Defiance mission and the cover is a good indicator what the issue is about to an extent: Fathers and Daughters.

Reeling from their mission against Dr. Light and the Radiant Man, Team Defiance gets a lesson in the art of swordsmanship. Ever the meticulous and calculating mastermind, Slade doesn’t pull any punches in his attempts to be heroic with his new team. There’s a conversation about the weapon that a sword truly is, it’s an interesting topic and moment for the team as they’re given thoughts to ponder with what weapons are in their hands. Kid Flash, for instance, can be the most dangerous man alive if he had a sword and used it like Deathstroke would in his “past life,” but the true fight is with Rose Wilson.

Cox on colors is a display of the clean slate this title has gone through since issue #21 where the members of Defiance are thrown into action with the identifiable white and black immediately popping out. And the duel between Rose and Slade highlights that with Paz’s inks solidifying the characters in panels, giving them volume. Neves makes panels as big or small as they need to be when showcasing the action and enforces the blows traded by the two of them until a fatal blow puts Slade down for the count in a surprise move.

Priest continues his world building and slow burning side plots with a player that’s still unclear how exactly they tie into the larger Deathstroke grand scheme but the relatively normal and human parts of this book are welcomed. Little by little, Priest’s handling of the characters shows their strengths and ability to bounce off of each other. Power Girl is a scientist and stands alongside Slade as the residential technological expert — and this new mystery involving a sword belonging to Rose calls for super science.

Going back to the moments when Deathstroke as a title is reveling in the Wilson Family drama, it shows how demented and insane a family can be — albeit everyone doesn’t have healing factors and political intrigue to deal with on a daily basis. Jericho and his mother have it out across his own brand of speech boxes thanks to the lettering of Schubert. Through the insanity of their lives, it’s an actual realistic conversation happening between a mother and her son, similar to Rose and Slade having it put earlier in the issue.

This is issue acts as one of the more Deathstroke of old issues as conversations and references stretching back to issue #9 are being had across the board and as the Defiance Team helps in the present with another mission, the Wilson Family is stuck in the past with issues of their own. Jericho shows his prowess as leader off during the mission with a chaotic couple of pages from Neves and Paz rendering the team in place doing what they do best.

Priest keeps the dialogue and banter between the team sharp, intelligent, and concise where it never feels like anyone is wasting the other’s time and informs the readers on some tidbits they might not have known about a character’s abilities.

Deathstroke has retained his nature as an asshole leader with sprinkles of goodness in his own way as a “superhero” in the Defiance Era of the team. Although he’s considered a good guy to an extent, that doesn’t mean probelms that stemmed from his “orange and black” lifestyle won’t rear their ugly heads if a mission has ties to it. This issue itself has shown us how the pat always has a wave of coming back to us and the nature of unresolved family drama can come back to bite, or stab you, where it hurts.

The dominance of Deathstroke being one of the most well-crafted DC Rebirth continues and it’s a very nice hot streak for The World’s Deadliest Superhero.