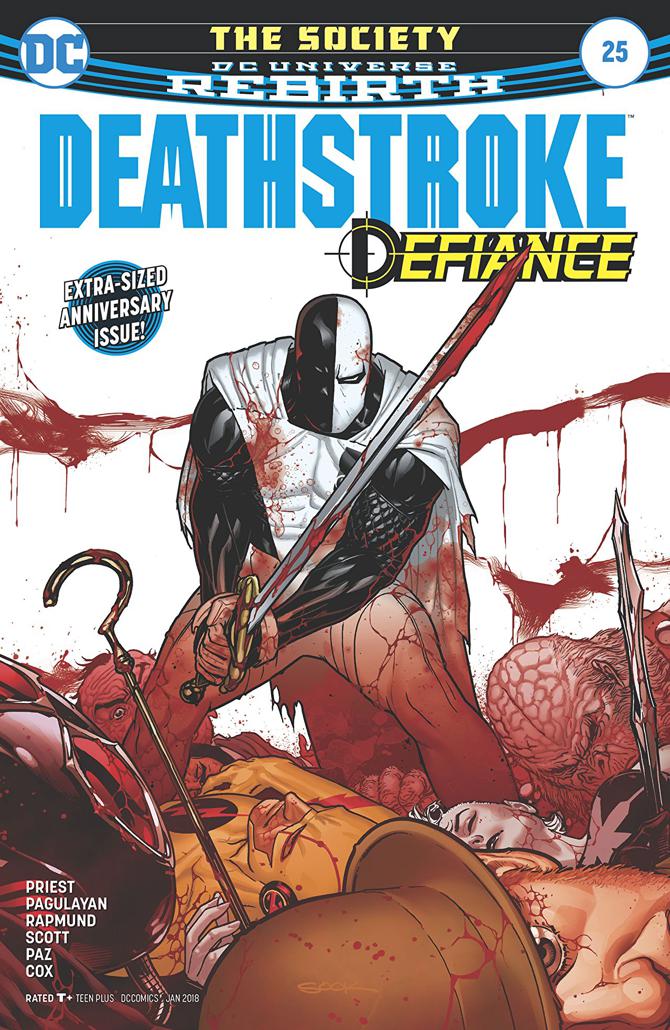 The Trial of Slade Wilson begins as the Secret Society of Super Villains kidnap their fellow “member” to get to the bottom of what’s been plaguing him for awhile now…being a good guy. This twenty-fifth issue of the Rebirth series not only poses some questions to think of outside of the comic but gives us deep look into everything Slade Wilson past and present.

Slade Wilson is a damaged person, that much we know. From his youth to adulthood he’s been a figure in terrible situations, making the best of them in his own way, and keeping up what he does until the next threat comes along. Luckily for him, Riddler and the rest of the Secret Society are giving him the perfect opportunity to reflect on his life and everything that’s happened in between. A single page from Pagulayan shows Slade’s current predicament perfectly and the trio of inkers capture the darkness and despair of Slade’s quarters. Consistent glimpses into Slade’s past are sprinkled throughout the issue and Priest remains a shining spot in an already great book with his writing. Slade has gone through a lot in the Rebirth era and Priest still manages to write him as the most deadly and interesting man in the room. In this issue specifically, Priest gets to write the Secret Society of Super Villains and it’s here he asks some bigger questions about the roles that Heroes and Villains share and what that means for this group of people debating on what to do with one of their own.

The Secret Society is on full display with a splash page that showcases the latest iteration of the society and Priest has pulled both mainstays: Vandal Savage, Killer Frost, The Riddler, Hector Hammond, Ultra-Humanite, Black Manta, Reverse Flash (Lex Luthor is a good guy now, so his slot is empty) and newer characters like Raptor, and Deadline specifically tied to his run on the title to fill out the society and their cause for meeting in the first place. Cox’s colors for the Society keep the darker and brighter colors as downgraded possible, making sure these guys are seen with grounded costumes and outfits to come off less as a bright and sunny team and as menacing as possible and that’s strongly to Rapmund, Scott, and Paz’s inking. These guys carry a certain weight to them and Priest makes sure you know that and the art team does their part by setting the tone with bolder expressions and panel shots of the villains. Balancing the present with the past, Priest guides Riddler as one of Slade’s saving graces in his trial and proposes unique prospects along the way. We taken along a recap of sorts of critical moments in Slade’s life (past issues of the series) and examples of whether he’s truly evil or not adding fuel to the fire of another matter altogether for the group of Super Villains before him.

The dialogue the SS begin about Deathstroke quickly turns on it’s head as more larger DC Rebirth plots such as Lex Luthor’s heroism and Killer Frost being there in the first place add to the conversation at hand about labeling people and what that means when you go against the grain. Pagulayan has a lot to handle on the art. Retelling moments of love, Slade’s origin, window-sized panels of classic Deathstroke events, and inserting Riddler into the story like an omnipresent narrator all carry the book’s grounded realistic edge and it all escalates to a thrilling, action-packed second half of an issue!

Schubert’s lettering is the unsung hero of this issue. Everyone from Slade’s Ikon Suit having caption boxes that have no set place on the page and instead are littered around when it needs to be, to Killer Frost’s speech bubbles being coded blue helps differentiate everything, a surprise special guest towards the end of the issue, and that’s not even taking mention of the barrage of punches and explosions that follow Deathstroke being….well Deathstroke. Slade Wilson gets to prove why he’s the World’s Deadliest in this issue and Priest let’s Cox and Pagulayan let loose as much as he does with pages of carnage and death worthy of the title. It’s revealed to be all for naught in the grand scheme but the sequence is a grim reminder about the person we’re dealing and that very reason has thrown Slade into the frying pan and launched into the fire because the issue ends with a threat that’s been building for awhile now and serves as another instance of the villainous past coming to destroy Slade’s future.

Deathstroke #25 is an issue that takes a look about the roadmap of its main character and puts him under a microscope to focus in on the characters development throughout the run and brave ahead into the continuing the next set of adventures. Priest and company do just that and keep up the level of consistency seen in only a few books on the stands right now. Deathstroke is a title about retribution, heroism, what makes a person, and changing in a world that won’t believe it at all. The anniversary issue has a few bumps in the road with the art, but they are few and far between and don’t slow down the ride that is this thriller of a comic book.