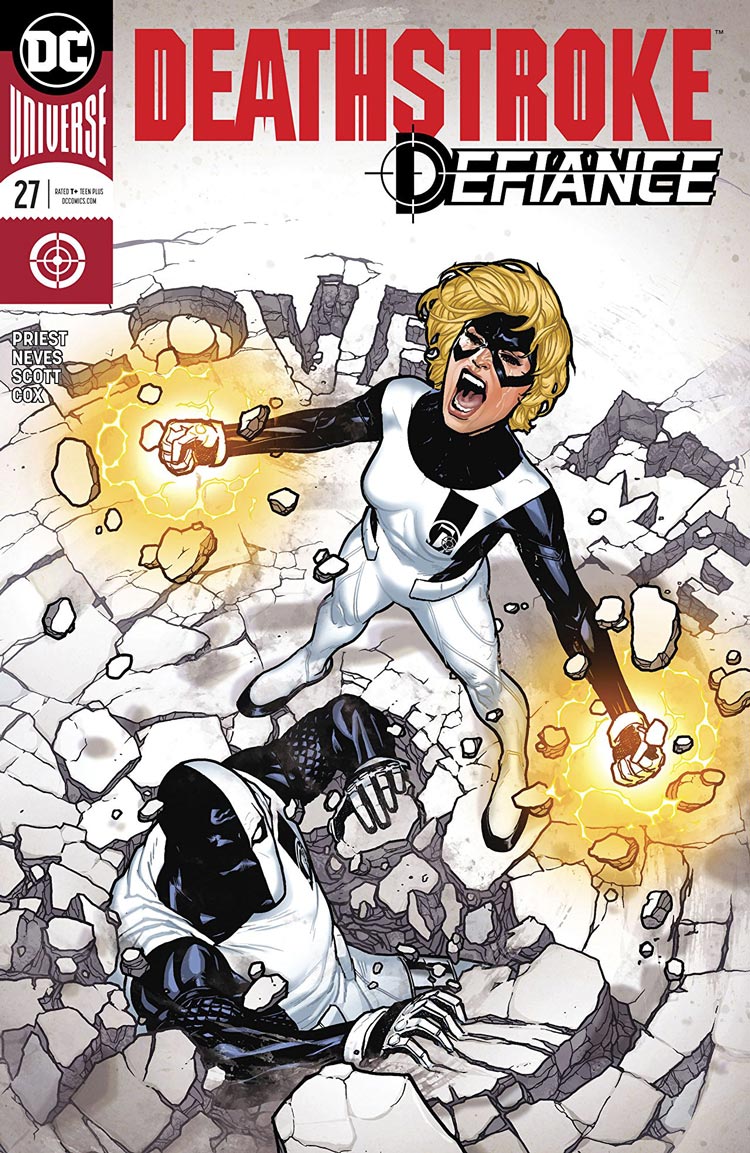 Team Defiance continues to crack at the seams and a longtime, submerged plot line in Deathstroke comes to the surface and the secrets of Terra’s origin and life might have everything to do with it. Priest has only recently brought in Terra into Rebirth and this issue gives the Titan her due as we explore her upbringing, life before and after Slade Wilson, THAT controversial story arc that exists between the two, and continues the ongoing issues of the Wilson Family as we reach a climax with the Defiance story.

The issue begins and sets Terra’s origin as the illegitimate daughter in the Royal Family of Markovia and how her life has changed ever since. The tragedy happens fast and sudden as Priest tells us exactly what we need to know about Terra’s world in two pages and the pencils from Neves give the opening a quick and brutal end in the snow as Terra looks alone as the one savior she knew is shot dead.

Terra has had a complicated past in the DC Universe and this issue details what’s she been doing to get to this point and Priest writes the anti-heroine as a snarky individual that does what she wants and Neves, Paz, and Cox give Terra an underlying bravado throughout her journey even when things go wrong, and they do. Moments of levity involving Terra with her signature color yellow and herself lightly inked when she’s joking around but can turn on a heel and grow more darker and sinister with the inking when needed.

Priest navigates a crucial moment in her history that happened during “The Judas Contract” and given the continuation of their work relationship with Defiance and suffice it to say… it’s still creepy and weird. Neves and Cox keep the art and colors of the short flashbacks tight and keeping in line with Priest’s writing of telling us exactly what we need to know, the carry the story in a short and concise manner.

Deathstroke is a comic that comes with emotionally charged characters and years of history between them all and Neves handles that well with the cast of very human characters he has to work with. Terra lashing out at Slade, balling her eyes out with Cox’s colors showing off her powers of Geokinesis and the Schubert letting the rock blasts fly.

There’s more to Terra than just her relationship with Slade and as we continue on with the modern day troubles of Defiance and the Wilson Family, all of those issues are coming into focus. From Deathstroke having a crisis of self on his new found path of good and being a hero with an A.I. Wintergreen strung along, international implications of Deathstroke’s action with the New Super-Man guest starring, and that’s all before bullets and rocks start flying!

Priest continues the type of conversations that have existed ever since Deathstroke gave up his old style of justice and decided to become a good guy and ask, “How long do you think this’ll last?” Slade seems honest in his speeches about the Speed Force changing and him being sincere in his mission but those around him aren’t convinced.

Schubert’s lettering is put on real display here with the cast of characters all having different methods of communication from A.I. Wintergreen’s robotic lettering, Kenan Kong trying to talk to Rose’s fiance despite him not being able to talk back because he doesn’t know the language (It’s a great running joke throughout about him not being able to do this), and the eventual explosions that come with a battle issues in the making….just not with who you’d expect.

There’s a lot to like in this issue of Deathstroke. Plotlines that were once far and away are coming into the spotlight and utilizing Team Defiance in their own problems as Slade is preoccupied with his own storyline that could potentially be the end of his time as his version of a Hero. Neve’s angular and sleek style wanes in places during conversations as the faces become similar for some characters but more than makes up for it with the range of characters style and the action aided by Paz’s inks and Cox’s colors that bring every scene that calls for it the right amount of stillness or bombastic excitement.

Deathstroke is reaching a fever pitch with not only the “Defiance” story but the more than year long worth of stories that Priest started since he took over the World’s Deadliest Assassin. Reveals, talks about what makes us good or evil, the past and people’s own agendas are coming into play as this thriller of a comic spirals out of control! While not everyone can be seen or spotted, Deathstroke maintains a consistent voice and tone as a comic that’s more about the characters first, and the heroic and villainous world they live in second.