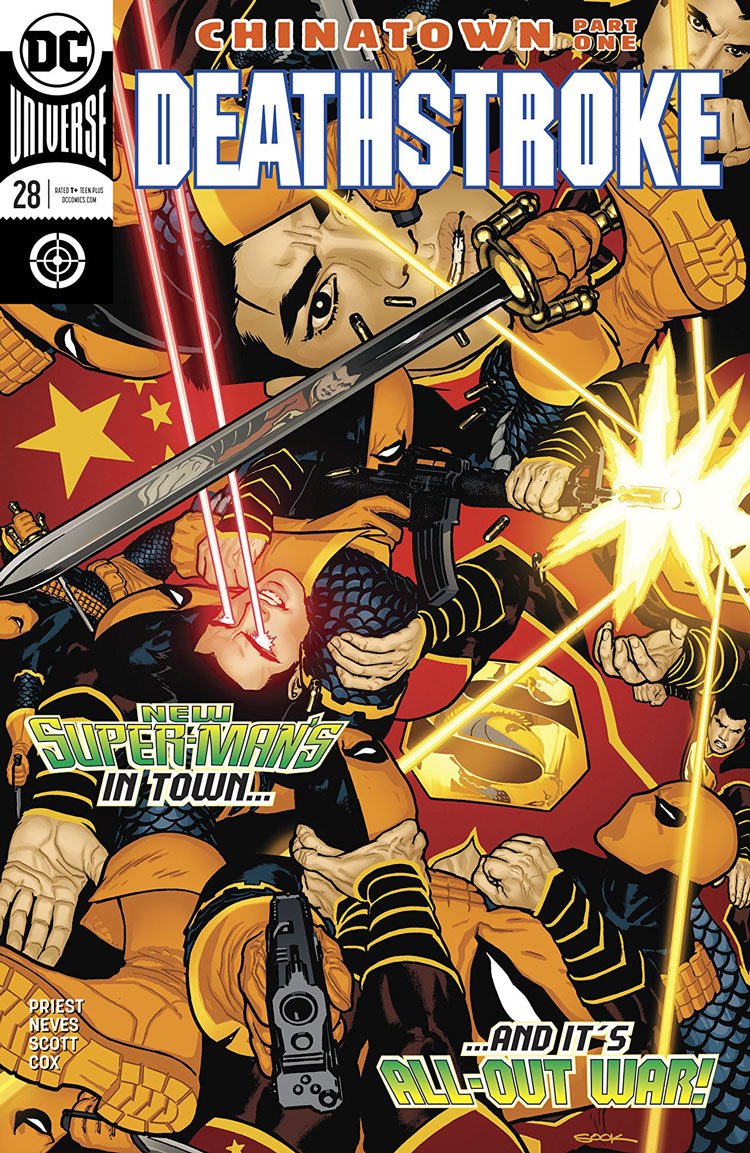 Fresh off the heels of the Deathstroke Annual, the main title gets back into the swing of things. Hanging plotlines that have boiled to the surface during the “Defiance” era take center stage as Priest unleashes several seeds he’s planted throughout his Deathstroke run for another exciting installment that turns a corner for all of the characters involved.

The point of interest this time around, is Rose Wilson. With the reveals of last issue that she’s been moonlighting as a warrior assassin with her own set of grudges and agenda, there’s just something about the sword of hers that warrants Slade’s attention. An opening that firmly sets Slade back into the good graces of his old roots is presented it and Neves and Cox give us a Hitman style takedown by Slade and does it effortlessly in nine panels. The coloring changes from light, to dark, to light again as he makes quick work of a target on a train and antagonizes the authority and Neves captures the stunned expression and the enforcing dialogue from Priest for Slade quite well.

He’s ever menacing and murderous to a point and exactly where we left off with the character several issues ago. Priest even incorporates a mirroring page the beginning of the “Defiance” era in this issue and it indeed confirms that the renewed Deathstroke is gone. The newest addition to the cast, of sorts, A.I. Wintergreen stands out as Slade’s voice of reason whether he likes it or not. The lettering from Bennett always coming into play when it comes to letting A.I. stand out from normal people having conversations is appreciated as his lettering in particular reads more cold and absolute than Deathstroke’s.

Over the course of the issue, we bounce around to different members of the Wilson family all dealing with the ramifications of recent or past events. Light on the inking when the pages call for it, Scott and Neves highlight Jericho’s journey and the events surrounding in panels of varying degrees. The panels hold their own history and weight to them and they’re on Jericho’s mind as we flash through them all. The coloring is vibrant and fits at every point from the afternoon sky to the sun down, the characters all look for the most part even if the pencils are looser at times.

Priest has made this new fallout of “Defiance” not one where the pieces fall back into place as they once were. The aftermath has changed Deathstroke’s corner of the DCU forever and his personal life. There’s hints of a darker path as people begin to see through his short lived goodness and abandon him altogether. Deathstroke is a character that has his own brand of justice and has garnered some manner of sympathy as he’s shown to care about people under Priest’s pen, but the good intentions he’s had is running dry as some characters meet and put a long standing plotline to rest with startling results for Slade, Jericho, and Kenan Kong!

As per the cover, the New Super-Man is in town and it involves a rather short lived battle between one of the newer DC characters for more interesting details involving Dr. Ikon and Rose. Rose’s character progression throughout this title reaches heights I didn’t see coming and to say anything about what is revealed would be a monumental spoiler about the hanging threads Priest finally gives us answers to.

It’s a true testament to the writing and level of planning that doesn’t come into effect until an arc or two later on his part and the consistency of the art team, giving Deathstroke a feel of being a longer epic read than most titles is also good. This issue of Deathstroke continues the momentum that the series has maintained for several issues now. Priest continues to have the wheels turn and always has something for these characters to handle. While the battle with Kenan is tragically not the crux of the issue, Neves and Cox make everything from the lighting and colors for the two powerhouses snap and crash into place. Bennett’s lettering even goes the extra mile to incorporate Kenan’s native language and the back and forth between them both fit in line with what we’ve accustomed to thus far.

Deathstroke is on a family sized crash course of action, drama, and character development as stories from all around become more clear and Priest is making the downfall of the Wilson family a lot more captivating and complex than it should be. Deathstroke continues to be the book that’s rewarding long time readers with amounts of payoff across the board, and looks good doing it.