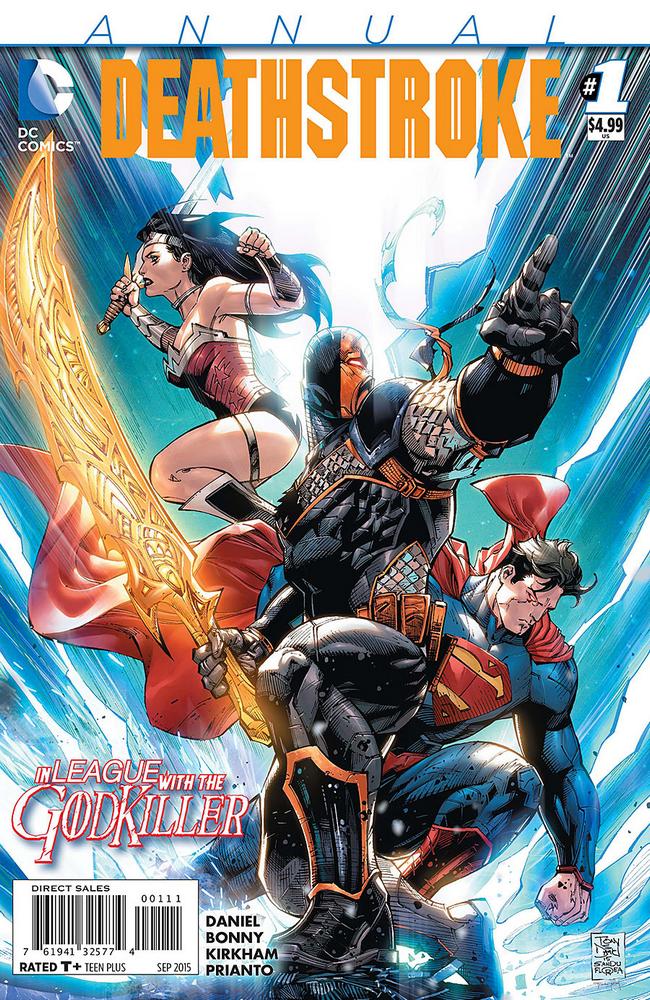 A pairing you never expected to see wages war on a Titan in this Annual. Yup, it’s time for a Deathstroke/Wonder Woman team-up!

You’d think a random team-up like that could be a riot, but I’m sad to report this comic was very mediocre. If the Deathstroke monthly is a wild HBO show with over the top action, this annual reads like a censored version thrown onto daytime TV. There is no over the top madness, no hyper violence and no…Deathstroke. The prospect of Deathstroke having Wonder Woman as a foil was something I was pretty pumped for. A hardass, nasty character throwing down some wild attitude and Wonder Woman putting him in his place? Nowhere to be found. It isn’t here at all, and what we get is a bland interpretation of both characters that comes across as almost a relationship by the end. The end result is a story that is relatively uninspired and lacking in flair. It certainly didn’t have the fire I’ve come to expect from Deathstroke and Daniel’s take on the character.

Tyler Kirkham’s work doesn’t bring any fire to the story either, with Wonder Woman especially appearing as a very stock, lifeless character throughout the issue. She’s lacking the power typically associated with the character, especially compared to Daniel’s own work over on Superman/Wonder Woman. Deathstroke is a rippled, muscled fiend, but he has no personality…and no one else in the issue does either. The very muted palette applied by Prianto takes any spark there is in the pencils out of the equation.

The net effect of a reserved take on these characters coupled with muted colours and generic pencils is a very average comic. Deathstroke is the kind of character that creators need to go a little crazy with, and Daniel has before, but there is none of that here. Here’s hoping the conclusion of the story in the ongoing brings some noise.