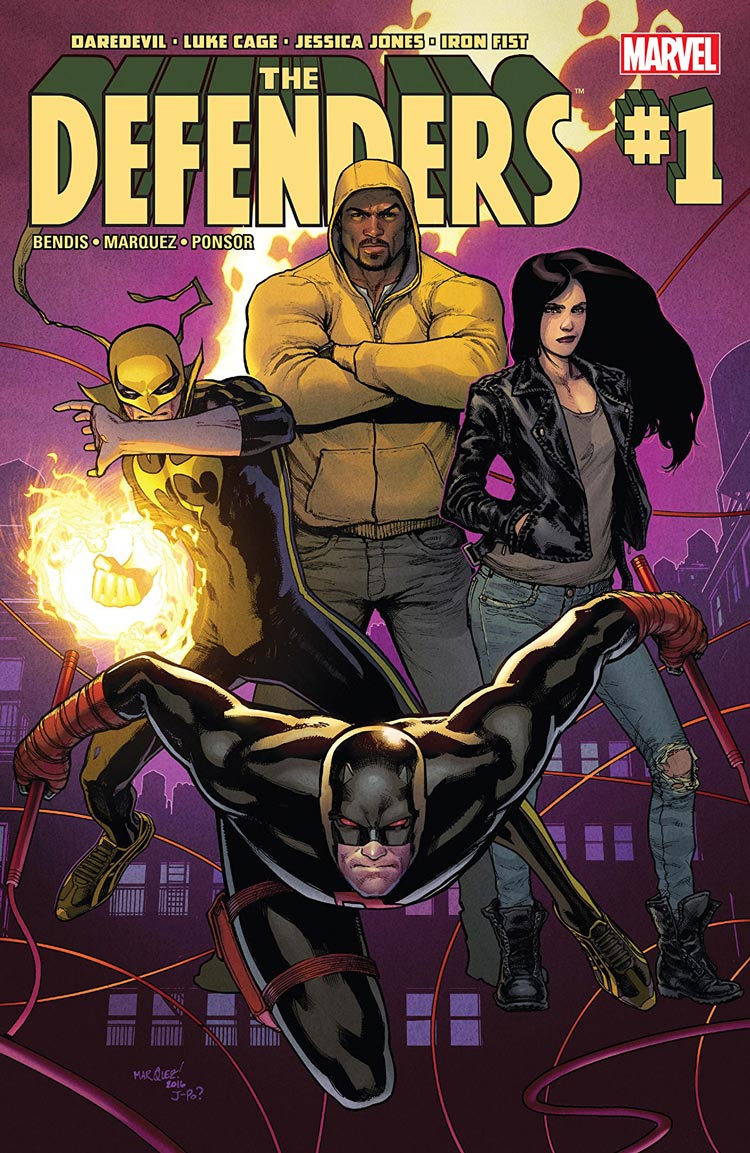 Given the imminent Netflix arrival of The Defenders series, it seems appropriate that Marvel would turn to Brian Michael Bendis to launch a new comic series to unite Jessica Jones, Luke Cage, Danny Rand and Matt Murdock together in the present Marvel comic continuity.

While Defenders #1 has a tremendous amount of promise, backed up by the tremendous art of David Marquez, it does little more than offer a tentative context for why the star characters would unite.

There is a lot to be said for the criticism of how Brian Michael Bendis establishes dialogue between his characters. There are a few pages that stand out as being particularly “Bendis-styled” in terms of repetitive exchanges of established knowledge, but by the end of the book these issues are less problematic than the fact that very little is explained behind the actions of the villain who poses such a threat that it warrants the Defenders coming together.

Yes, (spoilers?) Diamondback arrives in New York and is looking to consolidate his empire starting with Black Cat, but not before he has a missile fired at Heroes for Hire with Luke Cage’s name on it, among other atrocities not seen in the comic. As I was writing this review I was extremely perplexed by the fact that most of what makes Diamondback’s actions seem to be so nefarious come off as almost non-existent in Defenders #1 because, well, this comic has a Free Comic Book Day tie-in that reveals the ‘meat’ of Diamondback’s plot.

In the FCBD plot, Diamondback expresses clear motives for 1) why he wants each of the soon-to-be Defenders eliminated and 2) you see the action that causes the Defenders to, well, come together. Defenders #1 seems like it is actually a second issue since almost everything in the comic is follow-up.

Daredevil and Jessica Jones in particular are coming out of very dramatic situations that are bafflingly not even glimpsed in this premiere issue. Hopefully, in collected edition for this series, the FCBD issue will come before issue #1 so that the whole arc of the plot can be understood. Now that I have read the FCBD preview, much of what seemed to odd about this comic makes much more sense; however, it does not absolve the plot from seeming rather tame.

Diamondback injures a character who, apparently in the first issue, isn’t even seriously compromised by the experience. Weirder still, the character being shown in the hospital implies there could be something out there capable of harming heroes of this caliber, but … no … the character is up and kicking butt right after complaining about Diamondback’s new M.O.

What are the stakes of the plot? There is a single moment towards the end of the comic where Diamondback does … something … to Cage, something that seems to turn a one-sided fight to his favor, but this reviewer cannot explain what “it” is. Diamondback seems to release a gas or dust into the air which knocks Cage down, but that seems a little … pedestrian? Throwing dust into Cage’s eyes? Bothering to take down a single drug dealer peddling drain-o? Shooting somebody who immediately bounces back from it? Diamondback is presented as a somewhat ineffective foe, and it is the first issue.

Here’s hoping his scheme to take over the New York crime scene (and, hey, he has plans for more!) rest on more than what he has up his sleeve right now. No, seriously, I hope that is the case because I can’t even explain what his sleeve has up it already.

[Also, and this might be an error in the preview version this reviewer read, but there is a series of panels that should read out as “WHERE” then “IS,” yet the are depicted as “IS” and ‘WHERE.” This is an odd error and I find it odd that it made it past editorial, so I hope it is the kind of thing that can be fixed easily when re-printed or released digitally]

So, enough of what doesn’t work. What sells this comic the best? Hands down, the art, the style, and the amusing end-section that contains an “interview” with Cage himself. There is a clear attempt on the part of Marquez to capture the conceptual “look” of the Netflix Defenders, but they also bear hallmark signs that they exist within the current Marvel comic universe, such as Daredevil being in a black suit, etc… Marquez depicts Luke reacting to a series of (pardon the pun) explosive moments so he can be depicted in various heroic poses.

These work tremendously well since, given his indestructible nature, he gets to be shown on fire and surviving huge blasts. The colors of Justin Ponsor click well with Marquez’s lines and detail, his palette being rooted in very realistic tones and shades which only serve to heighten the level of detail.

The art is good. Damn good.

The idea of an attached interview in Marvel’s The Pulse magazine by Ben Urich is, if I may be so bold, the “heart” of this comic. It may seem odd to think of a prose piece as being the best part of a visual comic, but the interview delivers tremendous wit and charm. The interview provides a genuinely insightful window into what it is like to be a “street level” hero in the Marvel universe. I’d review this aspect of the comic more, but I think reading this piece should be enjoyed as the surprise that it was for me upon coming across.

Come for the artistic works of Marquez and Ponsor, but stay for prose interview bundled in with the comic’s final pages. I genuinely hope that each issue of the first few Defenders issues comes with these kind of vignette interviews.