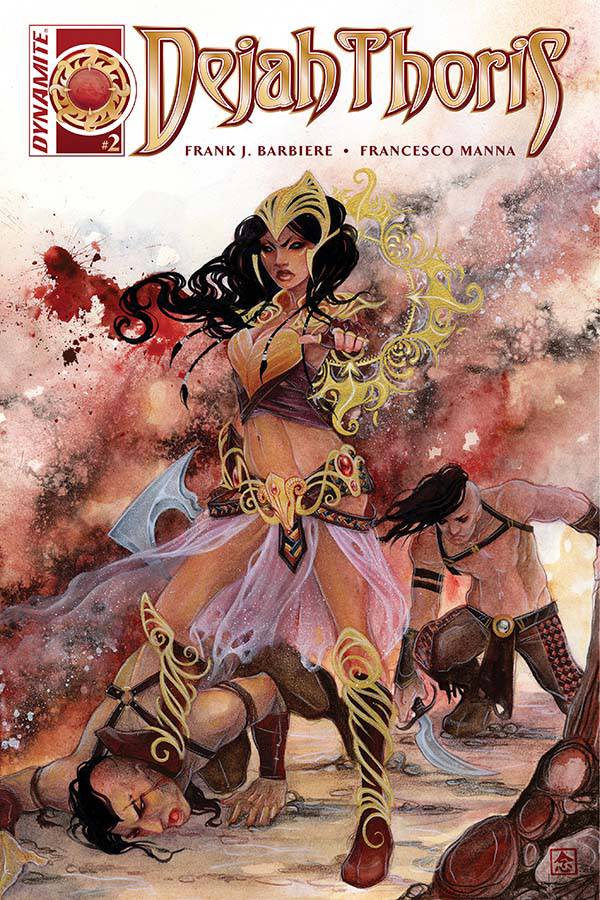 Dejah Thoris’s survival outside the palace walls continues with mystery, mystics, and military might. Dejah’s father has disappeared and she has been told by his untrustworthy advisor she’s not even his daughter. She has escaped prison, changed and her name to Larka, and searches for the truth.

This issue builds on the solid points of the first. The royal family had assumed those they had placed people in charge to protect Helium and Barsoom. Instead, wandering about, Dejah finds a people in fear of those with power. Barbiere’s story weaves real world, modern concerns about law enforcement abuse into this tale from another world. Manna’s art keeps the points subtle but clear. Poverty, hardship and distain for those in charge doesn’t hit you over the head but plays its role.

Once again, Manna’s lines, combined with Hickman’s colors, own the story. There are some great sequences where mystical forces take control. Vivid, almost neon hues take over, providing a great contrast from the Mars surfaces. The residence of this planet have red skin, and a red hued light that is seen in ever outdoor panel. The color differences between light, inside and outside, are eye catching. It allows readers minds to naturally transition between locations.

The final action sequence is over four pages, selling Dejah’s ability to strategize. Time and again, she proves her skills are not just in brute strength but how it’s combined with knowledge and study.

If you’re not a fan of the slow burn story, this isn’t the book for you. The creative team is looking to build up this mystery about Dejah’s quest to understand her lineage and find the man she’s always called father. Dejah’s human husband, John Carter continues to be along for the ride. His role is clearly supporting. He is investigating separately, using his power as the Warlord of Mars, and doesn’t take over the story.

This is a solid issue for those familiar with this world. For new fans, there is still plenty of story and action to help familiarize yourself with Barsoom. Political intrigue, civil oppression, and a healthy dose of butt kicking make this comic worth reading.