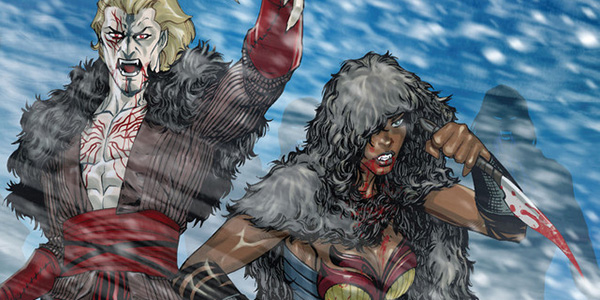 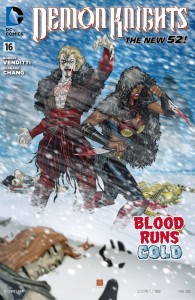 Thirty years have passed and it’s time to get the gang back together. The Demon Knights must ride again, and this time, they’ll have to defeat an enemy of unimaginable power — the original vampire Cain. But whom Cain has at his side is the true shocker, and has serious implications for one of the seven crusaders we’ve come to know and love.

First off, I am a true sucker for any story with a time jump. From the Legion of Super-Heroes’ Five Years Later story and DC’s line-wide “One Year Later” attempt post-Infinite Crisis, to the New 52’s own time jump between the events of Justice League #1-6 and now, the mystery of the time gap fascinates me. Its use then to give Demon Knights a soft reboot with new writer Robert Venditti is pretty genius in theory, and handled excellently in actuality. The complete opposite of blanking out what has come before, the act of jumping thirty years into the characters’ relative future (still, of course, our far past) weaves a sense of mystery about each actor while letting ongoing readers know they’ve been acknowledged and respected. It also gives Venditti a canvas upon which to slowly reintroduce these fascinating characters, starting most prominently with the Horsewoman and Exoristos, exiled Amazon of Themyscira circa 1043 AD.

The pace of the tale is so different almost immediately that I almost express a sigh of relief when paging through. As much as I loved the sixteen issues that preceded this month’s installment, every month felt to me like it was crammed to the gills with so much to take in. Venditti’s plot and dialogue breathe across 20 pages so I can fully appreciate the character traits and setting so unique to this book among all the ones on the store shelf. Al Jabr, probably my least favorite of the Knights to date, shines brightly in this issue, completely turning the tables on my expectation for the character. His dialogue with the other Knights, the two aforementioned ladies and gallant young Sir Ystin, is so perfectly wise, yet sharply funny as a foil to his brasher and less intellectual friends.

Chang delivers a strong issue, lending his trademark expressiveness to the features of each Knight. Every character’s eyes delicately reflect their moods, amid wrinkles (for the lucky few) and well-detailed expressions. Where Chang benefits too from Venditti’s more open structure is in environmental illustration. Every room, landscape and dungeon cell is elegantly rendered, with just enough detail to give a sense of wonder without disrupting the somewhat magical quality of depicting the far unknown past. Aiding in this mission, colorist Maiolo does an exemplary job of breaking from scene to scene simply by shifting the color palettes from cool to warm and back again. By the time we get to Chang’s magnificent rendering of Vandal Savage and Jason Blood, you can’t help but be affected by the glowing redness of the frightful scene.

If you haven’t read Demon Knights before, or had abandoned the title at some point since its initial launch, issue 16 is a brilliant place to jump back in and fall in love. Unique characters in a unique setting. Smart writing with high quality art. And a great place to start experiencing it all. What could be better?