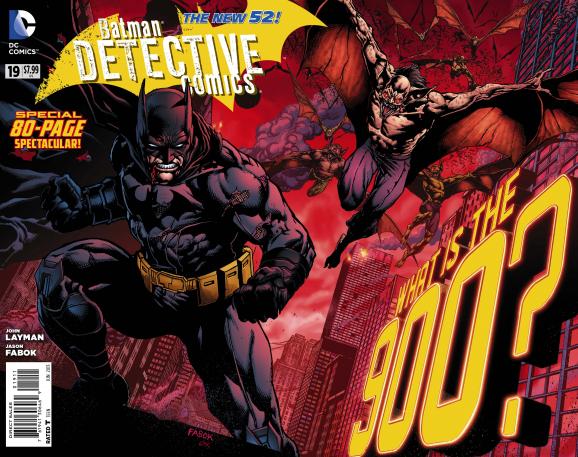 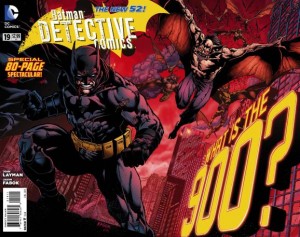 The 900 block of Gotham is under attack in this 80 page, $7.99 mammoth of a book from DC Comics. Detective Comics #19 acts as a tribute of sorts to what would be the 900th issue of Detective had the numbering not been reset by the New 52 and, oddly enough, is actually more of a setup issue than anything else.

John Layman pens four of the five stories in this comic and while his primary story with Jason Fabok is well crafted, it saddens me to say the rest felt like filler…and I do not like filler one bit. I’m going to focus on the positive first: the primary story. Layman and Fabok have a great chemistry and this introduction to the New 52 Man-Bat is well crafted. Layman tells the story of Kirk Langstrom well, and creates a Man-Bat that is chaotic and wild, but also worthy of the pity of readers. This could be an extremely tragic bat-villain in the end, and I look forward to seeing more of this character in the Bat titles. The story does feel somewhat like a one-shot with only mild ties to the Emperor Penguin storyline, but a solid story nonetheless. Fabok’s art is extremely strong and takes would may have been a mediocre story and made it memorable and quite enjoyable. His art is the strongest in the issue by far, and gives a title as high profile as Detective Comics the superstar quality it deserves.

Sadly, after this primary story, the issue goes downhill. The rest of the vignettes in this comic are not poorly written or penciled, per se, but they are, for the most part, confusing as part of this 80 page comic. They do very little to drive the Detective storylines forward, and one is a primer for a Talon storyline. I understand cross-promotion to try to boost Talon sales, but in this case it comes across as gimmicky rather than actually adding value to this comic. In the end, each of the stories outside of the primary one felt like filler, and for $7.99 a reader has to want more than 50 odd pages of filler.

Readers of Layman & Fabok’s Detective Comics will find some solid content in this 80 page issue, but other than the references to the 900 block of Gotham this issue has little in the way of Batman fanfare for people who aren’t looking for content related to the current storyline. There may be some interesting storylines that come from this comic and the Layman/Fabok story is of extremely high quality, but sadly the rest of the issue left much to be desired.