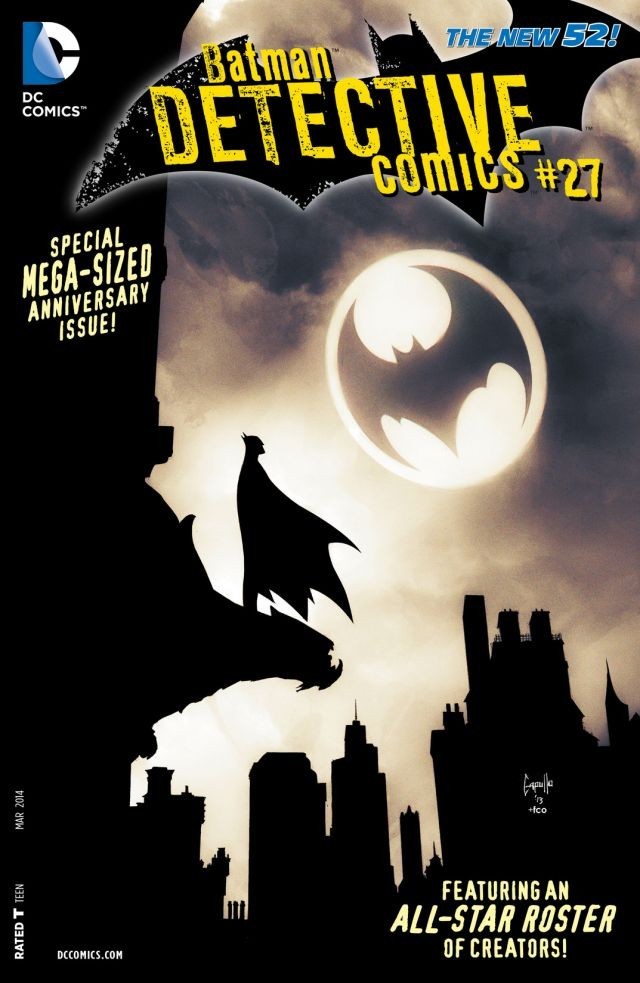 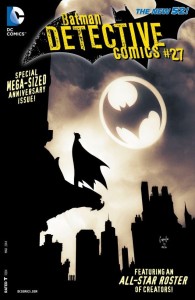 Anniversaries can be tough. A little less than a year ago, DC tried to have its cake and eat it too by marking what would have been the 900th issue of Detective Comics with an oversized, overpriced attempt at a celebration in issue #19. Delivering a mostly one-shot Man-Bat story, several unnecessary Man-Bat backup stories, and a standalone attempt to reframe Bane for New 52 continuity, Detective Comics #19 didn’t seem to have much to do with Batman’s history, and didn’t even seem to have much impact on the character’s present. Given that there wasn’t actually a 900 up in the corner of the cover, it felt like a halfhearted commemoration of a non-event.

All indications are, however, that DC learned from their mistake. Through a bit of fortuitous timing, Detective Comics #27 both invokes the original comic in which the Batman first appeared, and kicks off the year of the character’s 75th anniversary. Accordingly, the content of Detective #27 is steeped in history, starting with an updated and yet almost entirely faithful retelling of the very first Batman story from 1939. There are echoes of the past sprinkled throughout, including Ian Betram’s take on a classic Frank Miller panel from The Dark Knight Returns, and a compressed but energetic visual history of the Batman from Neal Adams that progresses from the halftone color and rigid panel borders of the past to today’s “widescreen” framing and digital color effects.

Perhaps just as importantly, current Batman writers Peter J. Tomasi and Scott Snyder use their contributions to point to the myriad futures of the Batman — each of which, of course, have their own histories. Given the increasingly enforced eternal present of DC continuity, in which characters can die but never get older, it’s refreshing to see the Bat family with a touch of gray, especially when all of the Wayne brothers, Dick, Tim, and Damian, can be there.

In fact, the best feature of Detective #27 might be the way it reminds us that history and continuity are not the same thing. As Snyder’s sci-fi look into Batman’s distant future quietly insists, Batman is Batman regardless of who he is fighting, the details of his costume, or what his sidekick looks like. It’s thrilling to see Tim Drake in his pre-New 52 Red Robin costume standing next to Damian Wayne in his Batman trench coat, and it doesn’t really matter whether it has anything to do with the current editorial directions for either character.

And this carries over to the single indubitably in-continuity entry in the issue, John Layman and Jason Fabok’s “Gothtopia” story, in which Batman wears white, works during the day, and is supported by a cast of characters that don’t look quite like you remember. Part of me almost wishes that Layman let things linger a bit longer in the vision of an alternate Gotham he and Fabok create, but much like the recent Zero Year “crossover” issues, Batwing, Batgirl, Catwoman, and Birds of Prey will each devote an issue to this brighter, but still twisted version of the city.

History, impact, a few extra pages, and most important of all, outstanding content. Yes, it seems that DC really can learn, and deliver a celebration worthy of the event.