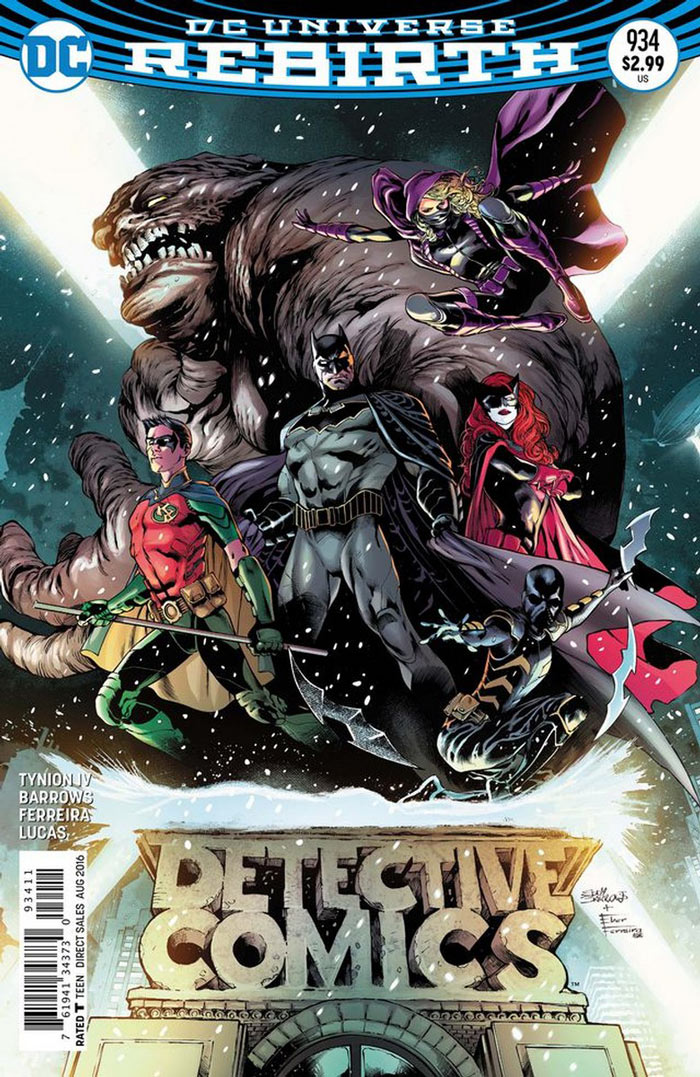 Something or someone is stalking Gotham’s young vigilantes and Batman is out of time to let nature take its course and produce great heroes out of them. Enter: the Batwoman, drill sergeant to the next generation of the Bat-family.

Fuck yeah, Batwoman is back.

Wait. You didn’t quite catch that?

And yeah, Batman’s there, too. I guess.

But seriously, DC Comics’ premier lesbian heroine (and some might argue premier Bat-hero, period) is back in action, with a new mission and every last ounce of what made her outstanding in her initial Detective Comics run all those moons ago. Tynion gives us a set-up that’s so clever and so respectful of everything Kate Kane is about, that it’s a little shocking we hadn’t gotten it already.

True enough, Rucka and Williams’ initial run was so much more about Kate discovering who she was as a hero and wrapping up the loose ends of her own rise to power. And for as beautifully rendered as Williams and Blackman’s run in the early days of the New 52 was, it never grasped this core conceit of who Kate is the way Rucka did — and now Tynion has — so elementally.

Batwoman is military. She is structured. She is about authority. Respecting it and being it. She is about working to be the best you can be, not for your own benefit, but to serve others. She is selfless. She is a soldier. And she needs a mission.

And she sees — finally — the recognition from Batman, a man who couldn’t possibly represent the structure and formality of law that the military represents, but nonetheless upholds it vehemently. I mean, there were so many ways this relationship could have gone wrong right out of the gate. So many directions a lesser writer could have taken their interaction. Rivals. Distrust. Even begrudging respect. What we get instead is an instant recognition from the Dark Knight (and by transitive property, DC Comics as a whole) exactly who Kate is.

She is the best. No need to qualify the statement. Just the best.

And it’s time that the rest of Gotham benefits from her greatness.

There’s no question in my mind that, to date, I’ve had a tricky relationship with the troops: Red Robin, Spoiler, Orphan, and Clayface. None of them rank very highly in my estimation, save Cassandra Cain, and part of it could be their heightened fallibility. But with Tynion’s clear love for the cast, and his recognition of what makes each one so great — filtered through Batman’s monologue — I’m beginning to come around.

And more than anything, it makes me want to see more already. Who else is up for the Batwoman-Batman boot camp? Ragman? Azrael? Hawkfire? Bluebird? Cullen Row? Renee Montoya in a familiar faceless mask? The possibilities are endless, and at the center of them all is a diehard drill sergeant who is going to make them into the heroes they were always meant to be.

Eddy Barrows too lends a deep amount of respect and life to Batwoman’s form, giving us page after page of unbelievably gorgeous renderings of her in action — and standing as an equal to Batman himself. Again, it would have been so easy to have the Dark Knight over take any scene he’s in, but Barrows gives the two characters such equal footing in their representation. It truly excites me to see what he has planned for Tim and Steph as well.

But Barrows’ opening act between Azrael and the shadowy figure of the Bat is also so incredibly stunning. Once again a character I have little to no interest in to date, having grown up in comics love long before the 1990s hit. And yet. Barrows’ visual treatment of Jean-Paul Valley is so lush and fascinating, amid the flaming building and crashing panels, I just can’t help but want to see more.

Overall, Detective Comics #934 was not only a great start to an entirely new era for the Batman Family (or as I shall call it, the Batwoman Family), but also a rich look at major players and an excellent first chapter in a fresh story I can’t wait to sink my teeth into. No mere preface or intermission, this comic is by far and away, the strongest debut of any Rebirth team to date. And I am once again damn glad to be getting another installment in two weeks. I couldn’t possibly wait another minute longer.