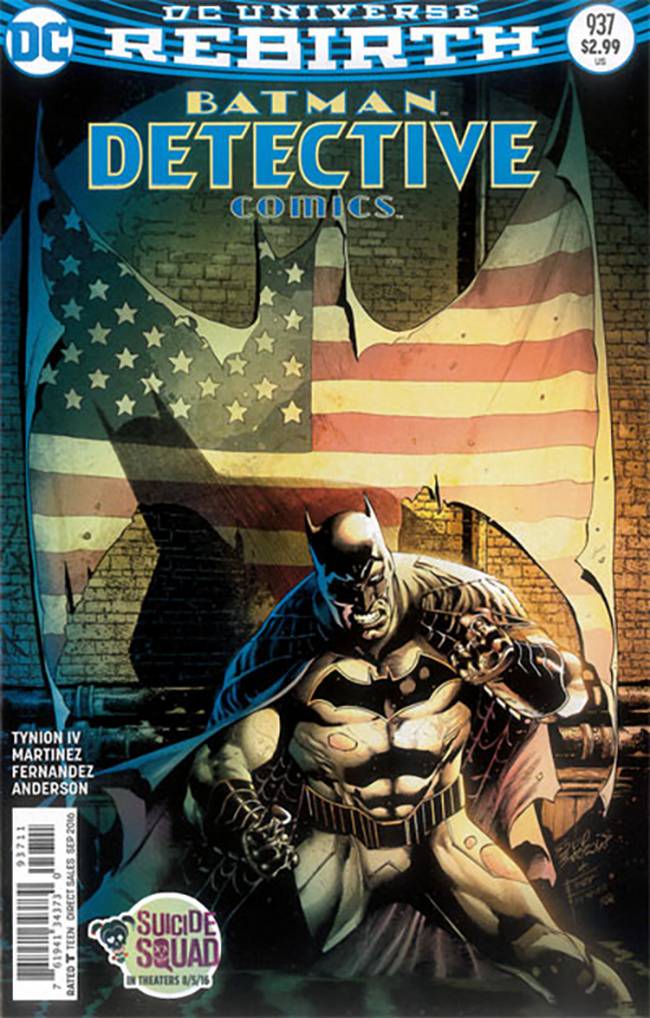 The Bat-Army is in the shit now, warring with a Batman unit of the American military while Bruce is incarcerated. It’s all the right kinds of mayhem and Detective Comics is one of the best titles you’ll find in comics right now.

Tynion’s exceptional writing of these characters continues with issue #937 and he’s doing a great job of slowly transitioning them into a more cohesive unit. Tynion’s take on these characters jives with how I like to read ’em, and each personality brings a great dynamic to the book. From Kate’s kick-ass nature to Tim’s wizardry to Basil’s ever looming massive figure, this group is all the best parts of Gotham rolled up into one mishap crew. They remind me of the Guardians Of The Galaxy over on the other side of the road, where a group of relative misfits comes together and it just works.

Tynion has built a good villain for this crew, and I’m finding this conflict quite plausible. There isn’t much that can keep a team like this occupied, but Tynion has built a situation that will challenge them nicely. Kate’s Dad is one of those foes that has just enough logic behind him to make the conflict work, and the might & money of the American military keeps all of this plausible. Bruce’s situation in this issue keeps the story moving nicely, and I really like where Tynion is taking this with revelations that appear at the end of #937.

Art-wise, this issue is rock freakin’ solid. Alvaro Martinez and Raul Fernandez team up to deliver some really sharp pencils. They handle action well and the gravity of the situation is reflected nicely in the artwork. Martinez’s layouts are strong and I was impressed with every panel in this comic, end to end. Brad Anderson’s colour work is solid, and the dynamic colours he uses for the team make them pop off the page. Thus far, the art of Detective Comics has more than held up its end of the bargain and any time I see Alvaro Martinez’s name on a book I’m going to be giving it a look.

Detective Comics #937 continues what has been an absolutely amazing arc. Tynion, Martinez and the rest of the crew deliver a great tale and I can’t wait to see where this is going next. This is one of my favourite comics of the past several years. Do not miss it.