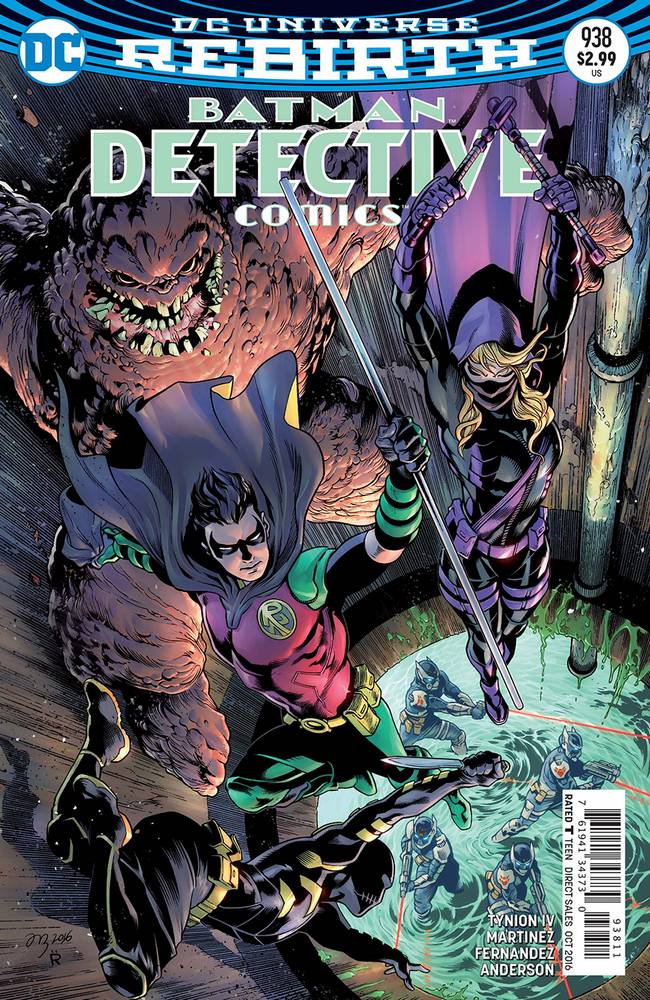 In Detective Comics #938, Batman’s squad of trainees comes to his rescue, but they now have to break out of the facility. As Batwoman declares to their team, “We’re moving to escape. Not to win.” From there all hell breaks loose. Writer James Tynion IV opens the issue with a bit of a flashback, showing readers a moment of bonding between Jacob Kane and his daughter, Katherine (also known as Batwoman), which comes full circle by the end of the issue.

Tynion puts Batwoman front and center in this comic, but keeps the ensemble close by, giving Red Robin, Clayface, Orphan, and Spoiler each a shot to show off and contribute to the tale. Batman stirs the pot a bit, keeping the story moving, but this is Batwoman’s show, from the opening scene to the final confrontation. Tynion’s take on Batwoman is sharp and smart, but by the end Detective Comics #938, she’s closer to her squad than her family. That makes for more drama, piled on top of the drama resulting from this issue, setting up the conclusion of this story and assuredly more tales yet to come.

The art on Detective Comics #938 is solid and effective. Al Barrionuevo and Adriano Lucas present the flashback with hazy mist, accentuating the sentimentality inherent in the scene, while underscoring just how wide of an arc the relationship has taken as Alvaro Martinez’s gritty lines come into view. The majority of the issue is by Martinez, with Raul Fernandez inking and Brad Anderson coloring. Martinez and Fernandez bounce back and forth between significant lighting and heavy shadow, as would befit a facility such as the one the Bat-squad is trying to escape from. Along the way, Martinez turns in a number of iconic images, like Red Robin using his bo staff to land a kick, Clayface shifting his hands into blades, or Orphan surveying her victory.

Martinez also has some visual challenges that don’t quite lock in, such as Clayface’s constantly shifting size, the United States flags are hanging upside down in the facility, and characters needing a bit more pop to project out from their backgrounds. On occasion the heavy shadows distort the characters faces, making eyes much larger, in addition to heavy shadows around the visible sclera of the characters. It frequently enhances the broadcast emotion, but more often than not simply comes across as excessive. Anderson’s colors ground the story in reality, with a wide range of earth tones and an appropriate amount of lighting effects to Martinez’s drawings. There are a few spots where Anderson overpowers (or threatens to overpower) Martinez’s drawings, but those moments work within the story.