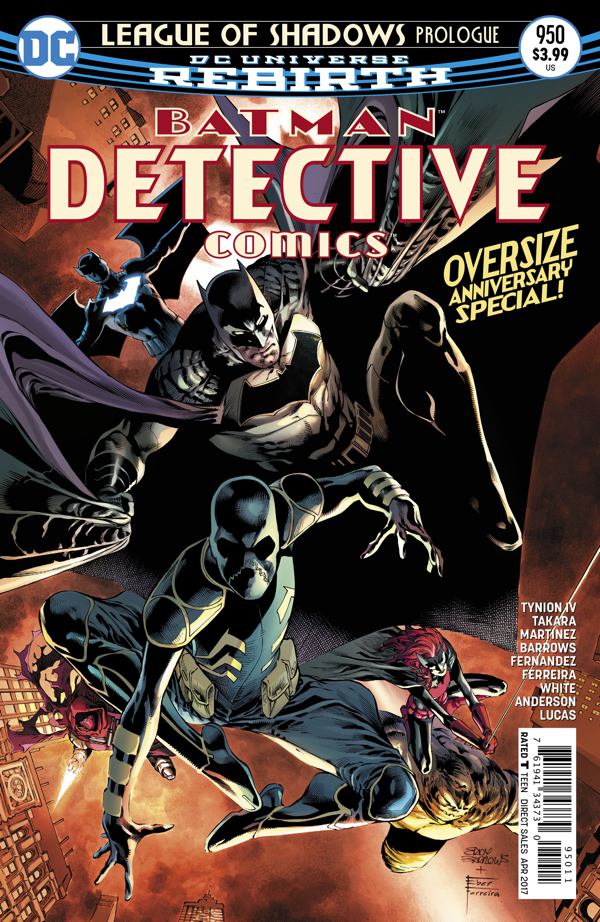 950 issues. Nine hundred and fifty. That’s a mind boggling number in this culture of perpetual first issues and reaching #950 is worthy of an oversized celebration…which is exactly what readers get with the newest issue of Detective Comics.

Detective #950 reads a bit like an annual, a bit like a transition issue between arcs and a bit like a recap of where this series has been so far. Focusing heavily on Orphan and Azrael, the issue acts as an introduction to the pair for readers who didn’t read Batman And Robin Eternal, and also as a means to catch up on the whereabouts of the entire team that has been assembled for Detective. Let me say this straight out of the gate: this could have been a mess, but it wasn’t…and that’s a testament to strong writing and solid artwork.

James Tynion IV writes three separate stories in this issue, and he executes each very well. The longest story focuses on Orphan, the deadliest member of this crew and also the most mysterious. He frames the story around her interest in ballet and movement, showing the parallels between beautiful dance and the way with which she inflicts violence. The gracefulness is captured well by Marcio Takara and it is obvious Tynion has big plans for this character going forward. She’s complex enough to handle the light being shone on her and I really liked where the team took this tale. The way it weaved through what Orphan sees in the different team members acted as an introduction for new readers to the crew and also a way to gaze into her often expressionless, mute face to see what’s actually going on in Orphan’s thoughts with respect to her teammates. Takara’s artwork loses some sharpness at points in the tale, but he nails the most important aspects where the ballet is a principal focus, and overall the story works really well.

The second story focuses on Azrael and teams Tynion with Alvaro Martinez and Brad Anderson, an art team that is steadily rising on my “damn, this is a killer art team” list. I enjoyed this story, which didn’t surprise me at all as I enjoyed Azrael’s role in Batman And Robin Eternal. I think his role as a zealot is interesting and he brings with him a foe that can challenge a team like this. He is a great foil for Batwing and Martinez takes the visual of Azrael and does some great things in this story. I’m excited to see what this tale becomes down the line.

The third story caps off the issue and is from Tynion and the “main” Detective team of Eddy Barrows, Eber Ferreira and Adriano Lucas. If you’ve read any ‘Tec thus far, you know something big is coming. My gut says if you’ve read Rebirth or any of the Bat-books, you know something big is coming. In this story, Batman and an old friend chat about what this team is really trying to accomplish and the creative team turns up the heat on this low simmering plot thread that something wicked this way comes. The story caps off the issue nicely and got me really excited for the future of Detective.

Detective Comics #950 simultaneously explores new angles relating to the Bat-team, gives new readers a nice spot to start and plants the seeds for big stories to come. That’s no easy feat, but these three stories in this over-sized tome do just that and Detective Comics #950 is a safe bet to add to your pile this week.