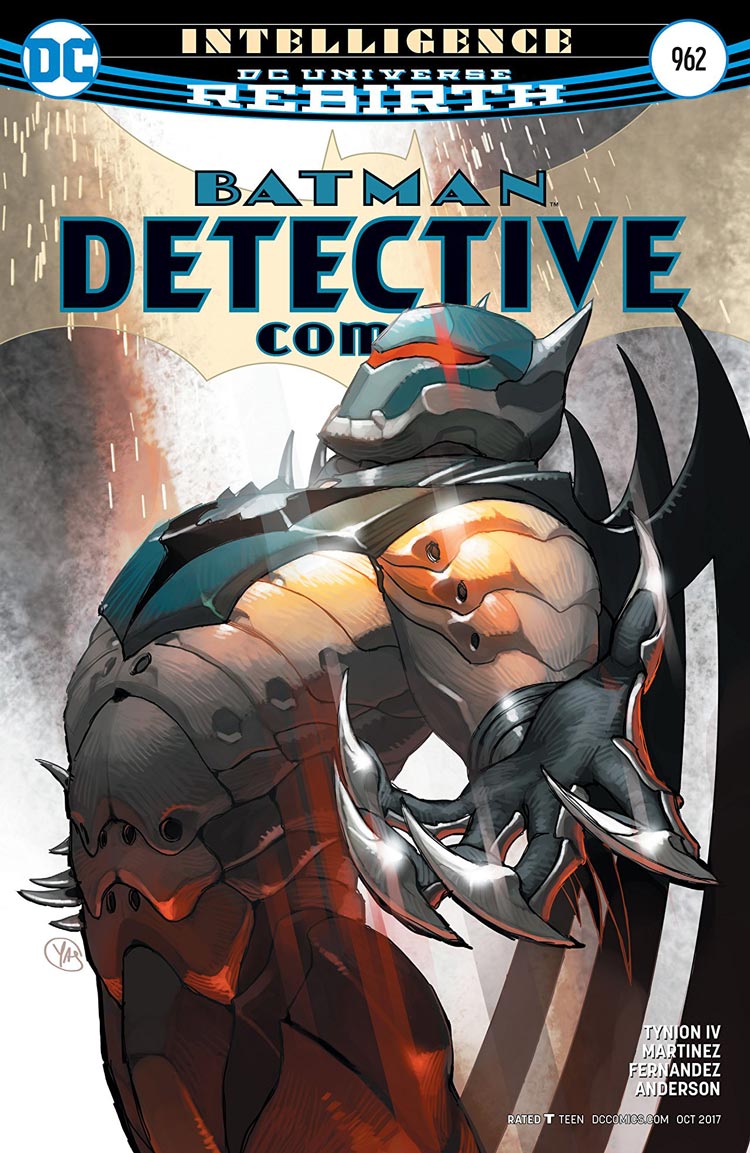 The conclusion of “Intelligence” is here, and it’s a treat for those of us who were DC fans in the ’90s. I wasn’t much of a Jean-Paul Valley cheerleader (I was focused on the Superman titles at that point in time), so this is really my first in-depth exposure to the character, and I like him. He’s a man of (admittedly weird) faith, a warrior for good, and torn between programming and free will.

This conflict has played out in the last few issues as Ascalon – the living AI originally confined within Azrael’s Suit Of Sorrows – has come to destroy Jean-Paul, along with most of humanity, for the Order Of St. Dumas. Ascalon is an interesting mixture of science and religion. Does he/it have a soul? Or is he/it just a collection of Violent Zealotry For Dummies programs? It operates on the principle that humanity is weak because it can doubt its own faith, and it finds that unacceptable.

There’s a great line in this issue from Jean-Paul where he tells Ascalon “You are too afraid to see the world from an outside perspective…because it might prove you wrong.” This is the core of zealotry, the unwillingness to accept doubts, to ever be doubted, and the drive to destroy anything which threatens that perceived perfection. It’s all in the name of seeking an absolute truth which simply does not exist in reality, but is given to Ascalon anyway at the conclusion of the battle. It’s a hopeful message of love being at the heart of all truth, and it was probably the only thing that could have stopped Ascalon.

The art is rendered beautifully, with the entire team working together as well as Batman and his team do. The layouts are done so that your eye follows the action, and it’s never unclear what’s going on. The sequences within Jean-Paul’s mind are amazing, truly showing us the conflict in his soul. Additionally, the page where Jean-Paul slowly returns to consciousness is shown from his perspective, and then we get the money shot of the glowing red eyes of the AzBats suit. It’s really cool.

My single complaint is that the ending was just a touch orb ex machina for my tastes, but our spherical MacGuffin has been set up nicely in the preceding issues, so it’s not out of nowhere. Still, I would have liked to see Jean-Paul end the conflict on his own terms rather than via an outside force. Considering what he learns about his father at the end, he’s going to be busy with those implications for a while.

Bruce finally learns a secret that the audience has known for some time now, and it changes everything from here on out. It’s also likely setup for November’s DOOMSDAY CLOCK, which I’m of two minds about. On one hand, I feel that WATCHMEN was and should have remained a contained, completed story. On the other, it is hitting every single “THIS LOOKS SO FREAKING COOL” button in my little nerd brain, and I’m excited for the Bat-clan to speed towards this event.