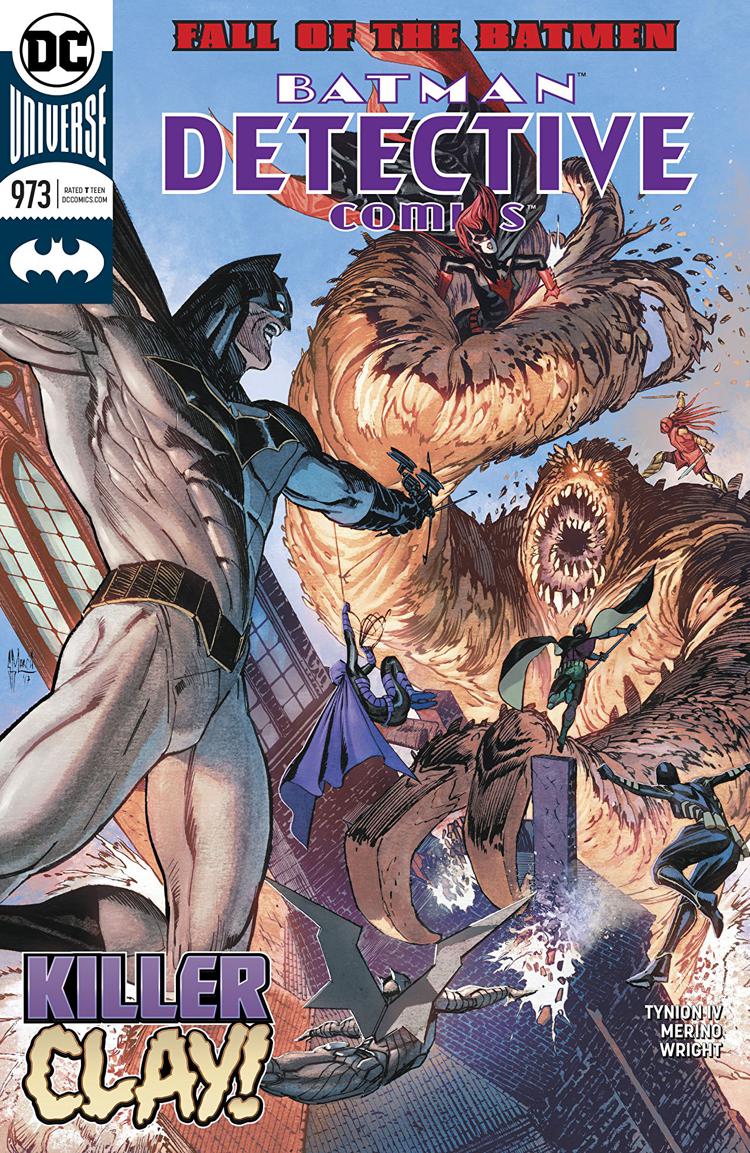 The team has been experiencing a schism for quite some time, and a gigantic Clayface is no help in the matter. With their base gone, the team scrambles to make many things right and set plans in motion. Some surprising alliances persist, while others are put to rest in a matter of moments.

Everything comes to the fore in this issue after a long road of building the Bats in the Belfry. The destruction of the base signifies a change in the status quo that may change the dynamics of the team. Such creative choices are often a signal that a series is about to embark on a direction unforeseen, but in this case they follow a string of decisions from the past few issues that have consistently threatened the team, its composition, and the bonds which make it work.

I tend to have mixed feelings about series that build a team to break them down later. Relationships are a wonderful method through which a story can be told, and capitalizing on the connections between characters can drive stories in emotionally provocative and relevant ways. To see the growing rift in the team manifest as Basil’s attack on the city speaks to the emotional resonance at the end of this issue, as well as the consequences of changes in a system. While part of me is reticent about this development, particularly on the heels of previous arcs, I do see its value in that it forces the remaining characters to truly evaluate where they stand with the world, with Gotham, and most certainly with each other.

James Tynion IV includes intense heartbreak among massive destruction. The team works hard to protect Gotham and to find information to help avert a crisis as their relationships are strained other the weight of heroism. The final pages, detailing Cass and Basil’s final conversation, are wrought with tension and feeling. Tynion’s writing of Cass in particular are near, dear, and painful to my heart. There is so much history packed into this moment, and not just from the pages of this recent iteration of Detective Comics.

Jesus Merino demonstrates a proclivity for detail, mayhem, and movement.  Clayface’s menacing and gargantuan body lends to a major level of destruction in the comic. Merino does well not just capturing the monstrous element of the story, but also in how the characters move around their recent friend. Some emotionality doesn’t quite resonate, as many of the faces do not seem to fully encompass what is occurring around them, yet Merino gets form and motion right for the scale of this comic’s setting.

Jason Wright’s skills bring out an uneasy darkness through every page. Images feel dense and emotional, underscoring the drastic changes we see throughout the issue. Darker color schemes are great for conveying the sense of dramatic urgency evident in each of the characters. Wright brings this effect to a head in the saddening exchange between Cass and Basil, and it is here that I feel the colorwork has the most profound impact.

The focus on team dynamics and relationships in Detective Comics has been its shining quality, and it is painful to see how these elements have been fractured in recent issues. All of this comes to a head as Basil turns Gotham into a state of turmoil. Even though this is the final chapter of a bombastic arc, it ends with a cliffhanger that will send readers reeling and that leaves one of my favorite characters in a state of acute distress. This series has been a stellar read, and the current issue is no exception, even if it is filled to the brim with difficult decisions and powerful feelings.