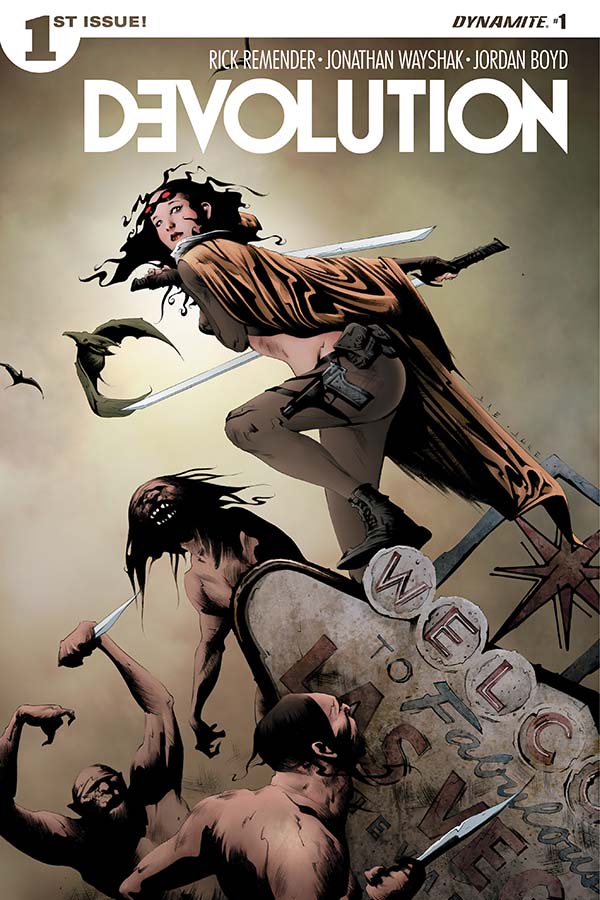 How do you like your expectations for the future of human civilization? Cynical with a side of depressing? Well, if that sounds like you, Devolution is a brand new series from dystopian future writer extraordinaire Rick Remender and spectacular art team of Jonathan Wayshak, Jordan Boyd on colors, and Rus Wooton lettering. For those of you familiar with Remender’s special brand of scary future, you’ll enjoy this. I mean, enjoy it as much as you can an extremely depressing book filled with violence and depravity, but still, you know what I mean.

So, Devolution. This books is exactly what the title suggests. Human beings never cease to war with one another, and scientists blame religion for most the battles. So, scientists being scientists, create a big ol’ chemical ‘splosion to turn off the part of the brain that believes in god(s). The process, however, goes horribly wrong (WHO WOULDA THUNK IT?) and the causes humans to devolve in the worst ways possible. They become brutish, not very smart, and, well, still war with one another. Our story follows Raja, one of the few who survived the devolution process, as she fights her way across a really messed up landscape. Like, really messed up.

If you’ve come looking for typical Remender, I’d say you’re about halfway there. This book screams Remender concepts. This is a highly dystopic future concept, brought on by religion and technology, and everything is bad. But this book is missing the relatable human element I usually love in Remender’s books. I’m hoping we get a strong female character in Raja, someone capable of fighting off the hordes of mindless brutes, but so far, the characters fall a little flat. The narration is well-written, full of information to understand the story, but the story itself skips around a bit too much towards the end, making it hard to follow. I recognize that this is a mini-series though, so there’s a bit of cramming in the story to get it all out. The premise of this comic is interesting, but so far it suffers slightly from poorly developed characters and a real sense of what drives the story.

Wayshak’s art, however, suits this story wonderfully. I found myself entranced by every page, the action flowing from panel to panel. The character designs are fantastic and diverse, and the environments are incredibly detailed. Every line is weighted well and provides a direct sense of purpose in propelling the movements forward. Boyd’s colors are on another planet in this issue. He manages to keep the grim tone to the book while precisely calling attention to key action and characters. Wooton certainly had his fair share of work cut out for him as well, as he expertly lettered a really, really wordy comic in aesthetically appealing ways. The art on this book is collaborative in every sense of the word, and every page was delightful.

This is a decent first issue. I enjoy the concepts in the book immensely; the premise is smart and cleanly executed with fantastically kinetic art. I’ll certainly continue to read this series, and am excited to see what this powerhouse creative team has in store for the rest of this book.