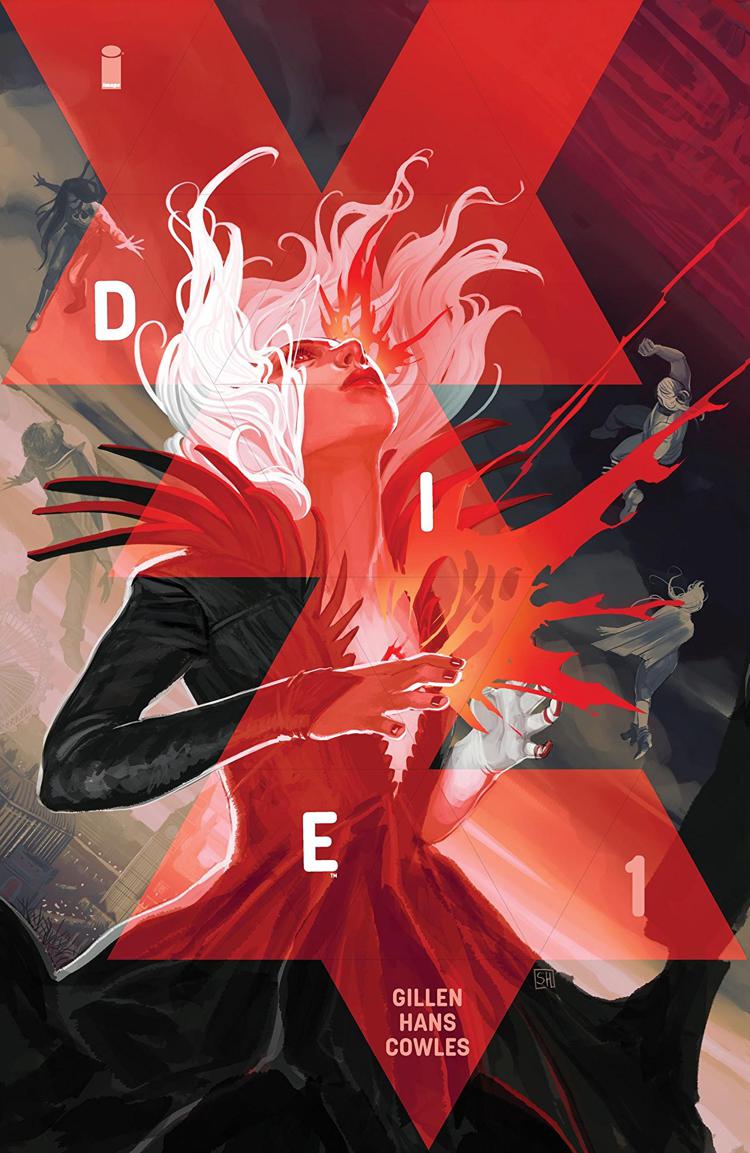 In 1991, a group of teens gather to play a role playing game at a birthday party. They disappear for two years. In 2018, they reunite and find themselves drawn back into the world of the game once again.

Die #1 introduces six teens, Ash, Angela, Chuck, Matthew, Isabelle, and Solomon, who gather to play a roleplaying game run by Solomon on Sol and Ash’s shared sixteenth birthday. Sol runs the game and promises a serious, dark, adult fantasy excursion. Each receives a special die with which to play… and then they disappear. They appear again two years later, sans Sol, and neither we nor the world at large can be told what happened in the fantasy realm they disappeared to. A geas prevents them from discussing it, even with one another. Decades later, as Ash celebrates his fortieth birthday, he receives a package that appears to contain Sol’s bloodied die. He reunites the other friends, and they’re sucked into the game world once more.

This introductory issue of Die is a fascinating meditation on grief, loss, and trauma. It cleverly sidelines the specifics of the adventure the kids had, because they literally can’t speak about them, to focus in on the way they’ve rebuilt their lives and cope, or fail to cope, with their trauma. By keeping us from seeing, or even reading, about whatever exciting or daring events may have happened to them in the fantasy world, we’re forced to grapple with their psychological torment without the mitigation of visceral pleasure.

To put it another way: It’s all too common to be shown an exciting action scene, then told afterwards about the trauma it induced. Because it’s more immediate, the action sticks with us more than the trauma. By excluding the action, Die #1 gives us nothing but the trauma. It’s like the difference between Watchmen, the comic (name-checked, in passing, in Die #1), which shows us grim middle-aged heroes coping with the actions of their youth, and Watchmen, the movie, which distracts from and diminishes that trauma with elegantly-crafted slow-motion fight scenes.

As a result, we’re pulled into caring about these characters right from the first issue. They feel real and well-drawn even in a scant few pages, and this issue does an admirable job introducing its characters and its premise, then getting us intrigued to see where it’s going in future issues. It accomplishes everything the first issue of an ongoing series ought to accomplish, and may be one of the best openings I’ve read to a series in years.

The art is all painted and the style is delightfully evocative, using dark tones heavy on reds and blacks. Facial expressions are detailed and nuanced, conveying the way the characters’ unspoken-of adventures have aged them and weighed upon them. Particularly striking are a pair of pages in which Ash weighs destroying the rediscovered die, depicted with streaks of blurry color that convey both the rain that surrounds him and the struggle within as he makes his decision.

Die #1 is a practically perfect first issue to one of the most promising new series to launch this year.