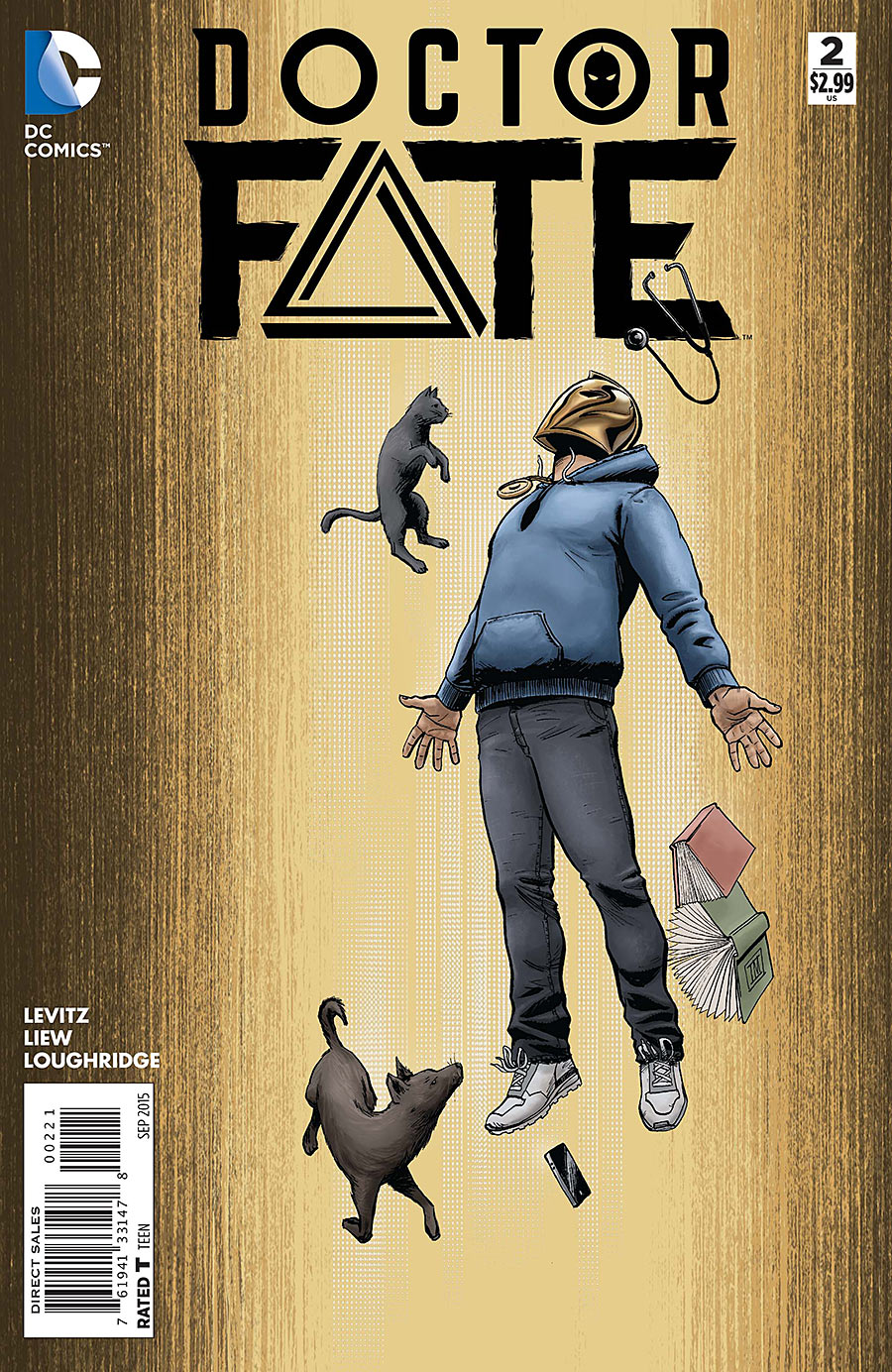 The goddess Bastet has chosen Khalid Nelson to protect the world by wearing the Helm of Fate, but the doctor-to-be isn’t necessarily convinced. Why him? And who is the talking dog god that’s set out on destroying the world and killing Khalid’s father? And will all of this stop before classes start in the morning?

The return of Doctor Fate to a leading role in monthly comics is definitely welcome, but the character’s checked publishing past highlights a very important note: the more like standard super-hero fare Fate becomes, the less successful the book. With his most critically acclaimed run to date (as well as longest) focusing on Eastern mythology and concepts of gender and spirituality, the character seems to thrive best when taken out of the DC Universe — or, at the least, held adjacent to it.

And as such, Levitz and Liew have chosen wisely, because Doctor Fate is not your standard beat-them-up comic. It’s not even your standard mystic fare. What it is, however, is a down-to-earth story that takes a skeptical protagonist and puts him on a path toward becoming a hero — slowly. Khalid is not a particularly emotional guy, and Levitz keeps his reactions highly intellectual as a result. But there is a compelling dynamic with Khalid’s family, and the effect the attack on the Earth by its rejected gods has hits home directly.

Levitz is taking a relatively slower pace in introducing both Khalid to the power of the helmet and us to Khalid’s motivations. But with issue #2, we get a bit more context for the history of the helm and why this particular Doctor Fate was chosen. It’s a slightly strange dynamic to see something so powerful not frighten its bearer more. Does the helm have a calming effect? Is it addictive? Or is this world Khalid inhabits just so strange that throwing in these crazy moments just another drop in the bucket amid wild dogs attacking and a world that has flying Supermen everywhere?

Liew, in fact, does an exceptional job at representing that normalcy in the face of outrageousness, giving us a pacing with his pages that makes Doctor Fate feel like a calm, steady read. Even when the Helm force-feeds Khalid information about its history, with Lee Loughridge’s bright and beautiful color palette saturating the page, it still feels like an intellectual experience and not an emotional one. It’s the bright pop of knowledge, not fear or excitement that penetrates Khalid’s brain.

The sequences depicting Khalid saving his father and then failing to save an airplane too mirror that tonality, and while it dies down the energy of the book a bit, it makes up for it in refocusing the readers’ attentions on the line of the page itself. Liew’s pencils and inks capture my imagination in a way that few super-hero comics do, with exaggerated bodywork on both human and animal.

His pencils buck the buff strongman approach to reflect an urban aesthetic more in the line of later Will Eisner style a la Contract with God. It’s an especially offbeat style that recognizes some cultural and visual tropes of illustrating oneself outside the standard Western style, but doesn’t trade on stereotypical or caricature-ish features. Tall, lanky Doctor Fate in a hoodie? Sign me up, as long as the guy inside is genuine and speaks to me personally. And he does.

The chapter that starts to answer as many questions as it asks, Doctor Fate #2 takes a 75 year old mythos and makes it fresh and honest for today’s audience. Khalid is an everyman, but he’s specifically who he is, and that balance plays out exceptionally well across dialogue and design. Doctor Fate may be a book you glance past on the stand, but don’t let it be so. Pick up a few issues and enjoy watching a new era of heroism develop.