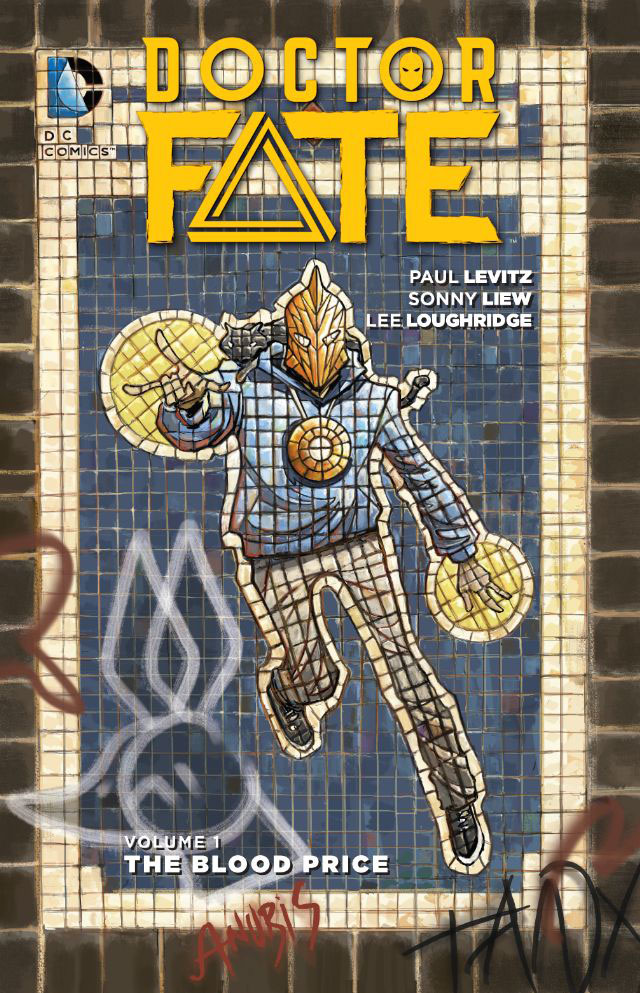 Khalid Nassour — first generation American — was just a normal kid about to start medical school. His dad, a doctor himself, emigrated from Egypt to Brooklyn to give his son a better life, sacrificing his own medical career in the process. Now, on the eve of the greatest flood the world has ever seen, Khalid is seeing things, and is approached by the god Bastet to wear the Helm of Thoth and defend the world against Anubis, the God of Death. It seems Khalid’s fate is calling…

In terms of the unlikely or unwilling hero, some days it seems like we’ve seen it all. From Peter Parker to Jack Knight to Ronnie Raymond, we’ve gotten this story a bunch of times. Great power arrives and with it comes an expectation of responsibility. And a world is turned upside down. So, what’s different this time around with Doctor Fate?

For a series predicated on North African/Middle Eastern mythology, Doctor Fate sure has traditionally starred a lot of white guys. Much like his counterpart over at Marvel, the Iron Fist, the role of Doctor Fate has typically been helmed by a white man of privilege (whether academic, financial, or legacy) who “discovers” the magical helmet that grants him power. Power that has a history and mythology in a culture he truly can only be an appropriator of. What was it that other glorious doctor had to say? “An archeologist is just a thief. With patience.” 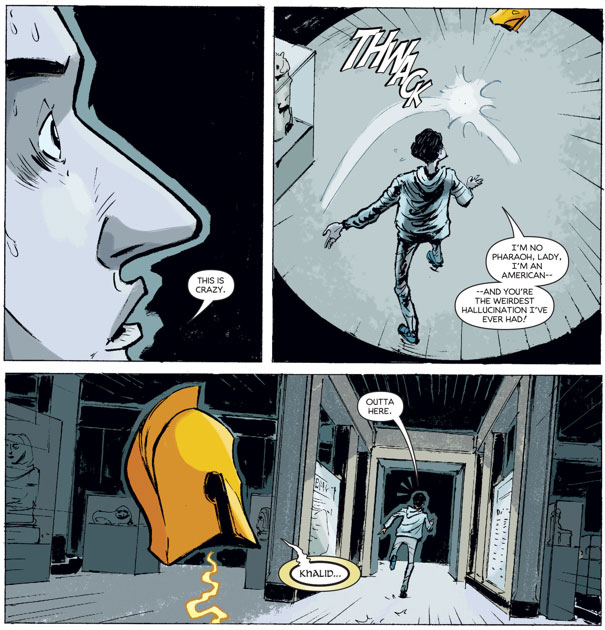 To say it’s important that everyone has a hero in which they can recognize themselves is an understatement. We’ve seen that pop up in the evolution of super-hero stories over the last couple of years quite prominently in characters like Batgirl, Midnighter (a whole slew of DC You characters, in fact), and most appropriately, the American Muslim heroine Kamala Khan, Ms. Marvel. And the effect this growth has had on the comic book community is profound.

The truth is this: first generation American, born of a Muslim father and Catholic mother (neither particularly religious), Khalid is a protagonist we don’t get to see very often headlining a comic book. But what makes Khalid so interesting in this case is the tension between what is blood and what is experienced. Khalid has no more connection, in a sense, to the stories and legacy of ancient Egypt than the Golden Age Doctor Fate did. It’s the dichotomy of the assimilated child — forever gently outside two cultures — that writer Paul Levitz is playing with here in a new Doctor Fate whose connection to the power he’s granted is at once fitting and challenging.

Levitz is working with a tension in Khalid that at once feels familiar and genuinely fresh and exciting. I have to imagine that all of the writer’s research and familiarity with the work of cartoonist legend Will Eisner has worked its way through his scripts on Doctor Fate in a profound manner. Eisner, himself an immigrant to the United States in the wake of World War I, frequently narrated his work — particularly the graphic novels of his later career — from the outsider status of a Jew in early 20th century New York. And that perspective on what its like to make the transition between two cultures plays itself out beautifully through Levitz’s scripts as well. 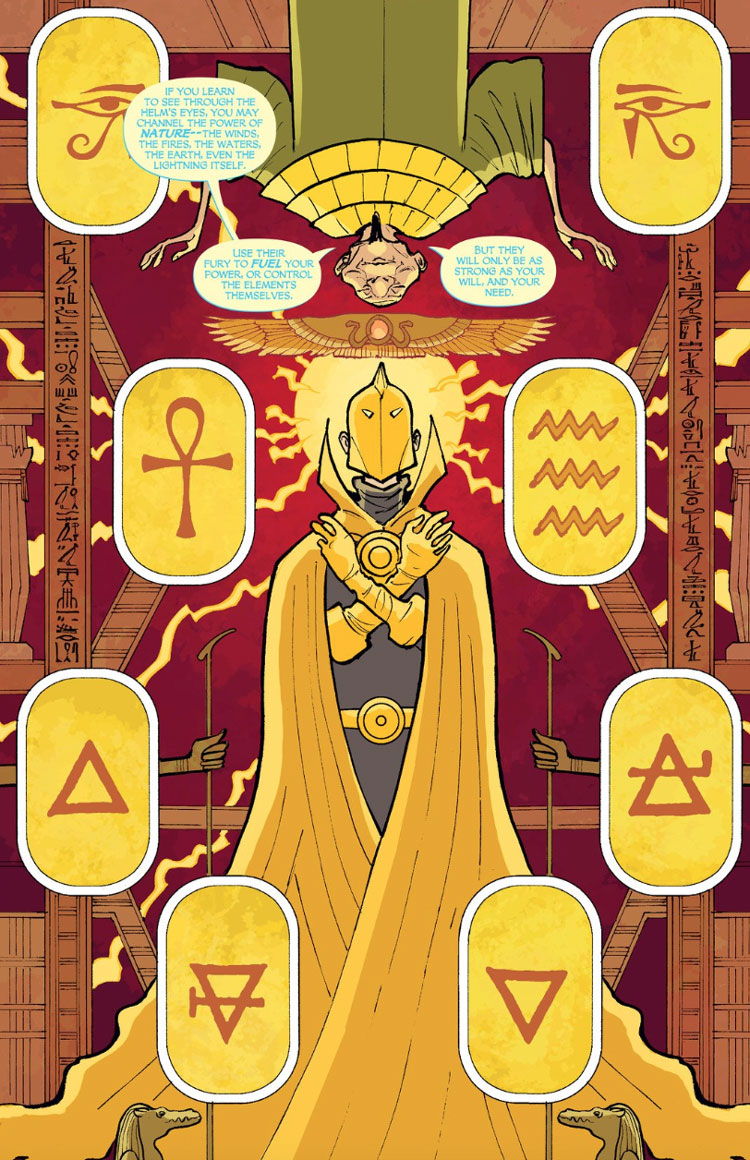 The difference, of course, is in that experience of a first generation American, who has known that home culture only through story, and not through experience. It’s the inverse, in some ways, of Eisner’s narrative theme. Khalid is not an outsider to America. But he is very significantly foreign in the Egyptian history and religious mythology that comes knocking on his door. It’s a conflict that’s infinitely more complex and alluring than that of the “mighty whitey” trope (or other appropriation narrative) and provides a much needed robust look at what it means to want to assimilate to American culture and feel held back for one reason or another.

Levitz’s narrative isn’t without fault, and in fact, reads a tad more pedantically in collected form than in monthly installments. A slow burn, the first seven issues of Doctor Fate move painfully slowly toward the realization of Khalid as the hero. Multiple setbacks and questioning moments pepper the type of deconstructed origin story we’ve come to expect in super-hero introductions (remember how many issues it took Ultimate Peter Parker to put on a mask?). While each chapter reads well enough on its own, by the sixth, one wonders how many signs young Khalid needs that he has a responsibility to take on. Had he not watched Spider-Man on Netflix? Get with the program, kid.

What’s unquestionable, however, is the magnificent artistry of Sonny Liew’s pencils and inks throughout every single chapter, leaving any concerns about boredom on the way to heroism behind. Liew’s loose, cartoonist style is the perfect mirror to Eisner — and the perfect match to what I believe Levitz is trying to accomplish in Doctor Fate’s story. There’s an intimacy to the drawing that gives Khalid an approachability, even in his weaker moments, and lends sturdiness in the moments of strength we see as well. 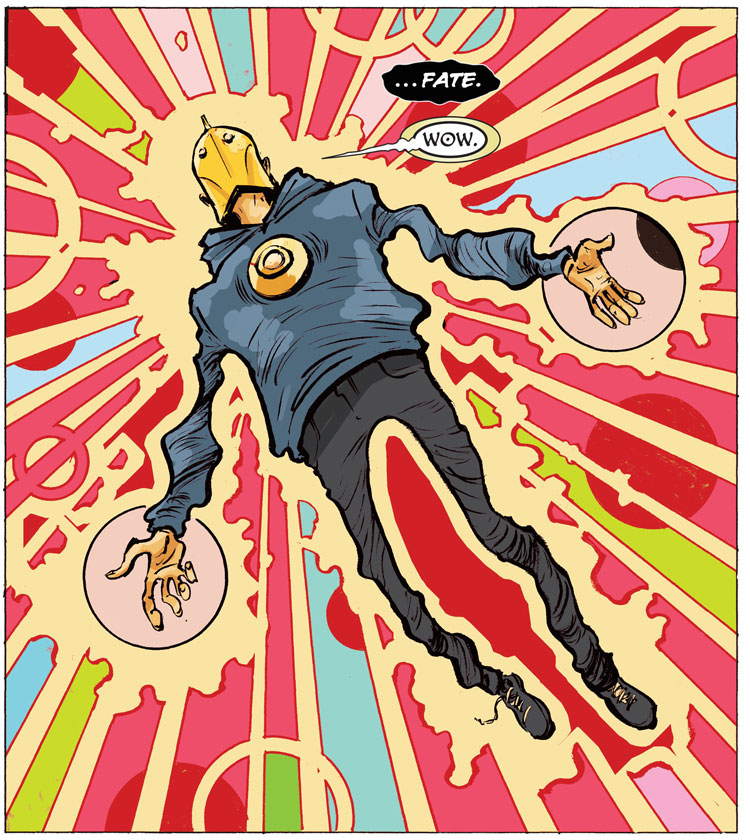 What’s most true is that we never forget that Khalid is a real, fragile human being beneath that helmet, as Liew’s body structures and postures keeps the character feeling humanly awkward. Khalid isn’t your typical pumped up super-human. Far from the traditional look for the mystic hero, this Doctor Fate is perpetually thin, lanky, and dressed in a blue hoodie, as one would on his way to his first day of medical school. The realism of the characterization (not just in dialogue, but in expression) contrasted with the exaggerated style of drawing just reflects the central conflict in Khalid so perfectly.

And outside of Fate himself, Liew has masterfully charted a layout that feels full of movement and vigor, capturing the chaos of a storm so perfectly in both environment and the villain Anubis himself. Partnered with bold colorist Lee Loughridge — whose work shines here as brightly as on his other beautifully done DC You books — Liew is giving us a unique take on action and page progression that makes every segment its own masterpiece. There are few books on the stands as outright fun to gaze at as Doctor Fate, owing to Liew and Loughridge’s smart choices and passion on the page.

A perfect example of how well it can work out to take a culturally problematic narrative and reassert it with more racially sensitive protagonists, Doctor Fate is the book Asian-American Iron Fist naysayers need to pick up and read cover to cover. And if they still don’t get it, they need to keep rereading this until they do. Khalid Nassour is no stereotype and his path to mysticism is accomplished on his own terms. Levitz, Liew, and Loughridge have developed a fantastic series that adds much to the landscape of the modern DC Universe. Here’s hoping we can see more from all involved, creators and characters alike, once this series sees its second arc close. It would be a shame not to.