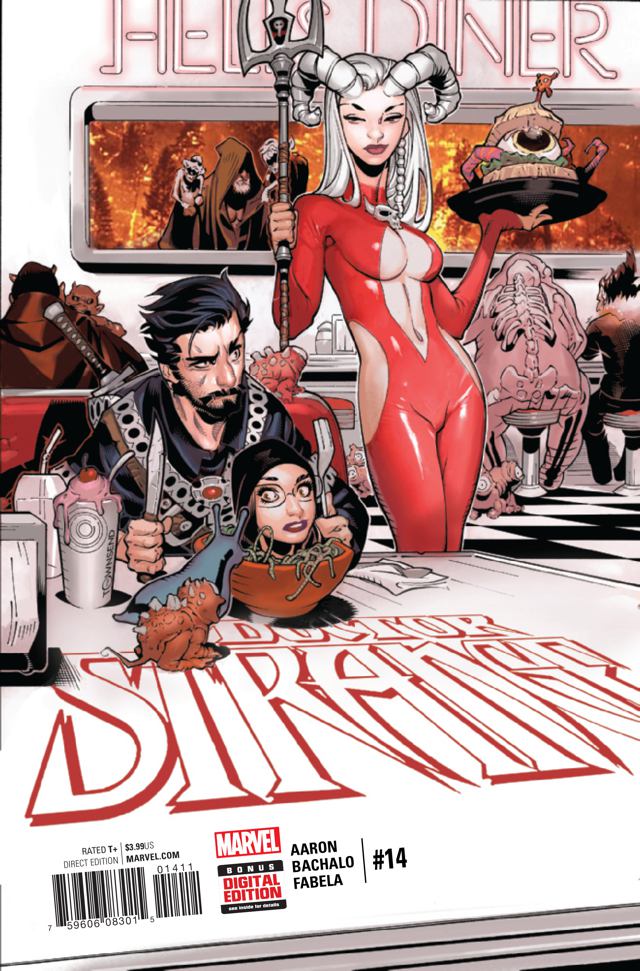 I kind of want to stop there, because that statement is as random and awesome as Doctor Strange #14. Jason Aaron has done a wonderful job with this series of transitioning the good Doctor into a character that has some personality. He’s got a razor sharp tongue, he’s arrogant to a fault, but he isn’t just “the magic guy” anymore, spouting weird incantations all stoic-like. This guy is relatable, he’s getting the shit kicked out of him, and now he’s in a literal Hell.

Sure, this Hell is Satanna’s diner, but it is certainly a Hellish situation for Doctor Strange. Aaron takes the concept of a diner in Hell and goes wild with it, throwing some hilarious dialogue and situations into the mix (such as the aforementioned bacon). This issue is full of quips and one-liners while also moving the overarching plots of Doctor Strange along, which is no easy feat. Aaron is locked in with this comic and his writing here is top notch.

Chris Bachalo’s chaotic style is the perfect choice for a diner in Hell, and he has really brought his A-game to Doctor Strange. You can tell several panels where Bachalo just takes the concept of this location and situation and goes full bore crazy with it, and it works so well. Bachalo drives home Stephen’s growing personality with great facial work and his panels with the Astral Spirit form in this issue are fantastic. Antonio Fabela matches Bachalo’s controlled chaos with insane colour work, delivering a Hellscape that is explosive and wild. Bachalo’s work is often at it’s best when he is colouring it himself, but in Fabela readers get to see a colourist who knows how to work with this wild style of penciling. This is a great art team for this comic and issue #14 was a wild assault on the eyes.

Doctor Strange #14 is exactly what I want from a Doc Strange comic. There is an unexpected lightness here, but it isn’t all a big joke – the stakes are still ridiculously high for the Doc right now and his world is a complete mess. I’ve never been as entertained by this character as I am right now, and Aaron and Bachalo have my full attention for as long as they keep kicking ass like they are right now.