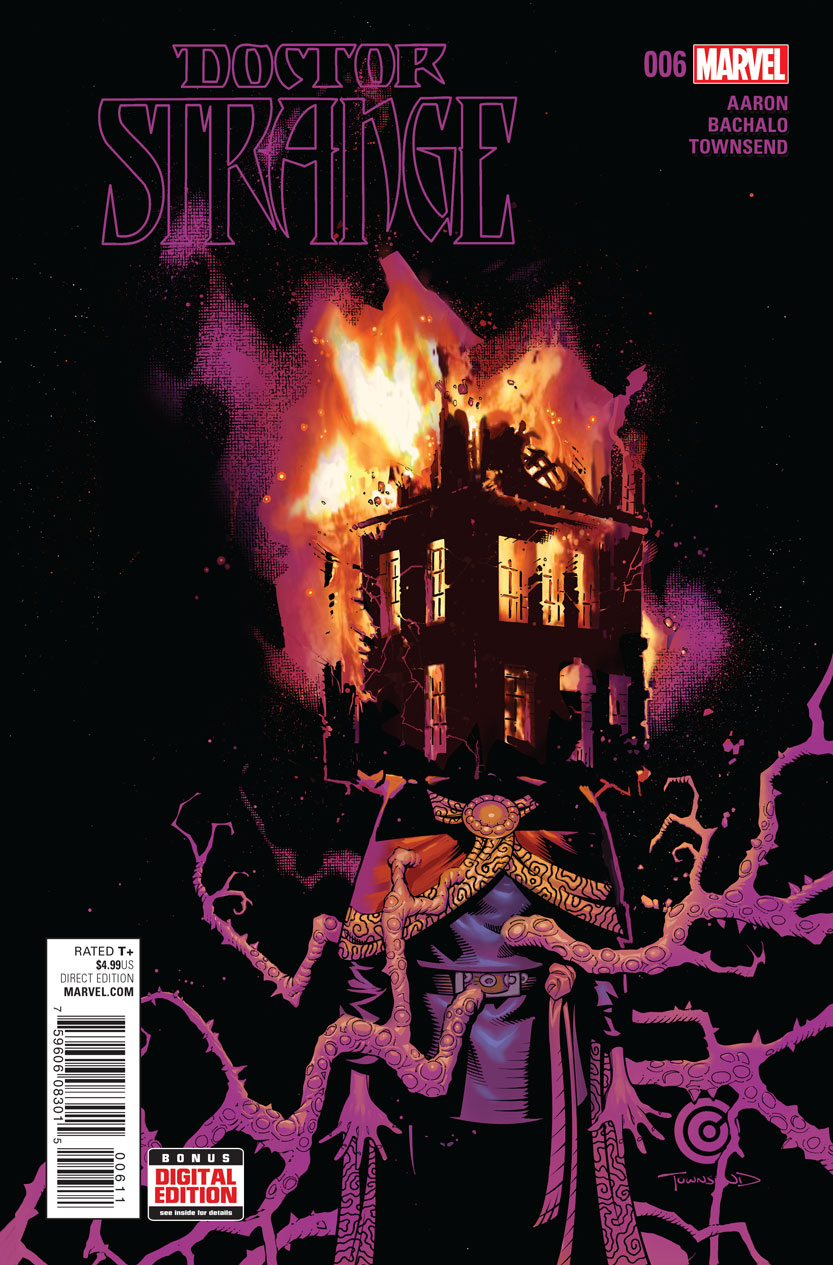 Stephen Strange has had so very little time to recover from the global and interdimensional assault on magic before fighting the Empirikul on the front steps of the Sanctum Sanctorum. Around the world, the ramifications of the previous arc are affecting a wide variety of mystical avatars, from the well-known to a little girl whose magically imbued friends make homages to Frozen. Stephen does not have high hopes for the power that runs through him or himself as he faces the end of a magical era.

There’s no way around it: Doctor Strange #6 was f***ing dark. This is the start of a new arc but the extension of a story that is bound to have dire effects on the magical Marvel universe. As one of the many vital forces of the universe, magic is connected to many heroes and it’s being threatened to an extent that Stephen is effectively dying. This first chapter of the new Doctor Strange arc is full of pain and struggle for Marvel’s magically endowed characters while revealing just who magic has touched across the world.

Jason Aaron condenses some massive plot development in relatively few scenes throughout this issue and that was a wonderful endeavor. There’s less focus on character depth and intricacy, but instead an intimate look at the dire effects of the Empirikul’s actions on Earth’s magical denizens. I appreciate Aaron’s foray into the gut wrenching consequences of the assault on the Sorcerer Supreme and those like him, as each of the wells of power is run dry, leaving many people to fend for themselves against a nearly unbeatable foe. The framing of each of the scenes in this issue was superb and Aaron has crafted a story for the ages since the inaugural issue of Stephen’s series.

Moreso than previous issues, the art was astounding in Doctor Strange #6. It’s murky, it’s dismal, and each person involved on the team put forth amazing effort to convey catastrophic and heartbreaking images for the end of magic. Bachalo’s pencils create a wonderful and fluid frame for the art through each page, capturing the shadowy essence of the attack on Stephen’s world. Along with Tartaglia, Bachalo continues to excel with dark and muted colors that intensify the dread apparent in the continuation of the Strange story. Yet again, the Team of Intrepid Inkers, now including Wayne Faucher, has thrown their talent into deepening the emotions and atmosphere of each image. This team has been stellar at conveying an immense sense of doom for many issues, and this one is no exception.

Stephen is in for some dark days, and I’m frankly glad that such a story is being explored through him and magic. I’ve spoken on this before, but I hope that this story has major ramifications on the rest of the Marvel U. To be honest, there’s no way it CAN’T, considering the cameos throughout the story and the intimate connection many characters have to a world of mysticism in this publisher’s comic pages. To fully capitalize on the gravity of Doctor Strange #6, Marvel has to fall in line and create the impact in a variety of series, which will make for a wonderful though bleak story. There’s so much potential for this All-New All-Different Doctor Strange, and this creative team is surely the one to bring it to light.