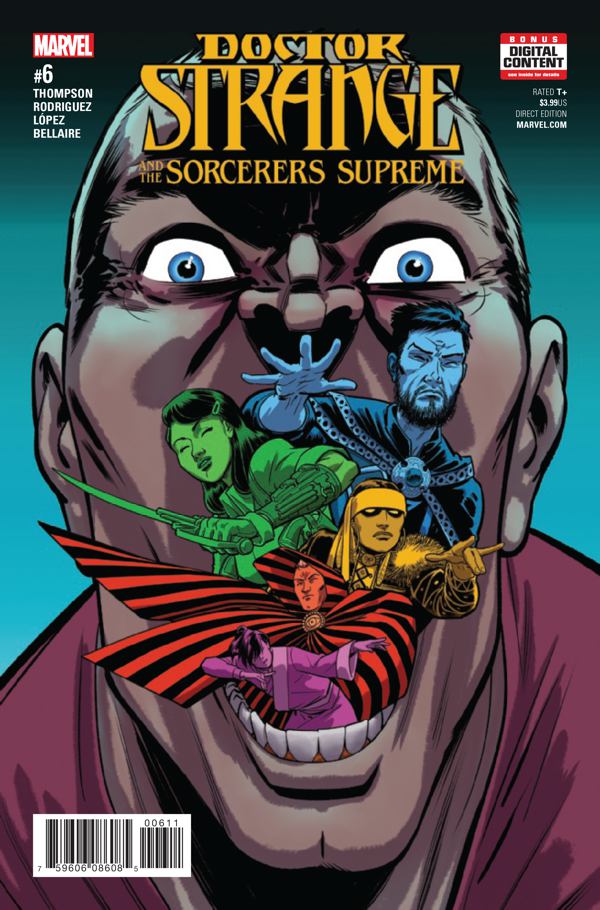 Robbie Thompson has been sneakily building a longer epic through a run of apparent done-in-one tales that really aren’t done in one issue. Each issue has had a cliffhanger – large or small – that spills right into the next. Thompson opens each issue with caption box reflections from a select Sorcerer Supreme, who then becomes the focus of the issue, giving readers a solid, but personal introduction. This makes each issue immediately approachable, regardless of the fact that the story has been one long narrative since the start. Sorcerer Supreme Sir Isaac Newton has run rogue, snatching upon the opportunity to claim the Word of God in an attempt to elevate himself to celestial status. That’s where Doctor Strange and the Sorcerers Supreme #6 picks up.

Thompson chooses non other than Doctor Strange to welcome readers into this issue, but the welcome is a hasty one, as Strange is captured, and needs help saving his teammates. That’s where you, the reader, comes in. Through a series of choices on page one, Thompson puts the story’s direction, literally, in your hands. It’s a smart way to present a tale that could be by-the-numbers, and Thompson executes the adventure with flair and fun, even revealing new information along the way. I’m not sure how it would work in a guided view digital read, but in paper, it’s solid and fun.

The art from Javier Rodriguez with inks from Álvaro López, is solid and clean, with trippy bits that fit the tale, inviting the reader into the heart of the weirdness. There are astral projections, mystical menaces, and quirky portals that call back to some of the most iconic images of Marvel’s most well-known Sorcerer Supreme, Stephen Strange, as drawn by Steve Ditko, Gene Colan, Marshall Rogers, Paul Smith, and Frank Brunner. Rodriguez’s work is more gestural than any of the aforementioned, but is stylistically closer to Ditko than the rest. Showcasing the collaboration between Rodriguez and López and their visual colleagues, Jordie Bellaire (colors) and Joe Caramagna (letters) Doctor Strange and the Sorcerers Supreme #6 works like a charm. The visual quartet takes Thompson’s intended multi-faceted story and elevates it into a fully functional story that has more than one possible path. The page numbers are clearly appointed, but not in an intrusive manner, and the cues to continue your choice of adventure are smartly designed to work within the flow of the story.

By the time I finished Doctor Strange and the Sorcerers Supreme #6, I found myself wanting to go back and read it again. Maybe even a couple more times. Yes, the central gimmick is reminiscent of the final confrontation from the Doctor Strange movie, but it works. It works so damn well that I now expect Robbie Thompson to revisit the Choose Your Own Adventure template on a regular basis in this title. As I mentioned, I’m not sure how the digital version works, but the paper copy is so darn much fun. I cannot recommend it highly enough.