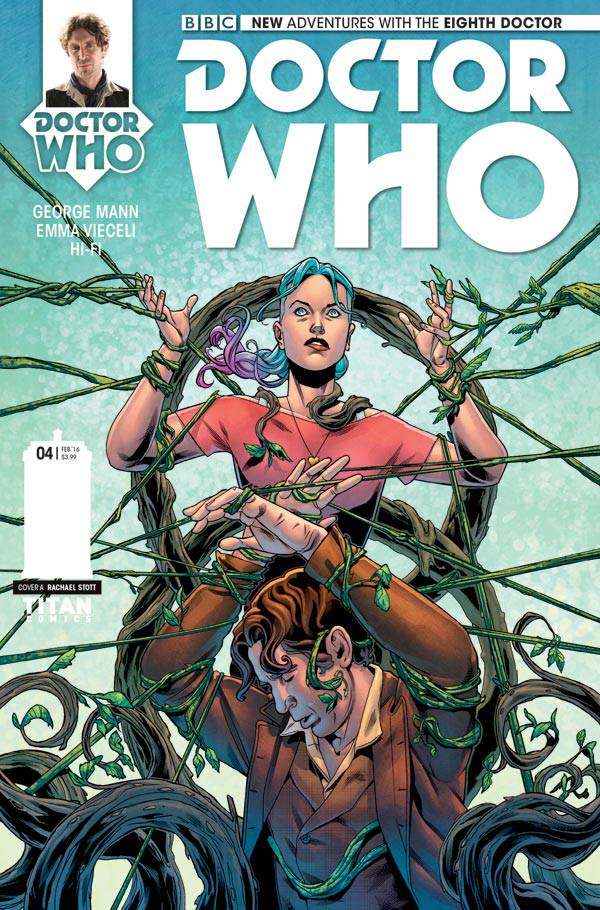 The one and done stories of this Eighth Doctor miniseries continue, with the most action packed and mysterious adventure yet.

This time around, the Doctor and Josephine find themselves having a run in with Fey. Emma Vieceli’s art lends itself rather well to a book full of elves and visceral foliage. Hi-Fi’s colors really shine with the 1930s setting. It will make viewers of the Doctor Who television show recall such episodes as “The Unicorn and the Wasp,” with the dialogue directly nodding at it in the issue, despite this adventure happening before the 10th Doctor’s escapades. The vine like creatures that take over this issue shift between horrifying and adorable. It’s a fine line that works well for the series, which has always prided itself on being suspenseful yet family friendly. The vines also lend themselves well to creating whimsical page layouts once exposition takes over.

The interesting turn of events plays a lot on thoughts and ideas of metaphors for colonization. What starts off as almost an uncomfortable situation that reminds us of human encroachment and colonization quickly takes a science fiction angle, as all Doctor Who stories do, changing the point of view. I do not think there was an attempt at commentary or message in the story. However, it is an uncomfortable reminder about how the world has changed because of groups of people taking over areas that they felt was there’s to take, yet someone was there before them. This might cause the story to not sit well with some readers.

What remains unexplained, is the loose thread created on the single beginning page of the book. The Doctor is on the hunt for something. He is completing a mysterious to-do list. This is the one thing all the issues have had in common, to keep you coming back for more. The art continues to be the key to any potential information about just what he is hunting for… but of course not enough to come to any strong conclusions. Fans of traditional Gallifreyan Time Lords will take note of just what you can see on this page.

Digging deep into the thin connections between each issue might be a past time merely for die-hard Doctor Who fans. However, the almost one and done style of adventures within each issue makes for a good introduction to the Eighth Doctor. Many fans do not know much about him because they either have not seen his television movie or dug into the Big Finish audio productions that create so much of his personality. Without this background this Doctor might feel a little two dimensional. Josephine continues to be the driving personality of the story.

Considering the detached nature of each issue, hopefully the payoff of the ending of the miniseries is amplified next month. The stories themselves are very easy to follow, and great for new readers who would like to jump on board and have some almost classic feeling Doctor Who adventures.