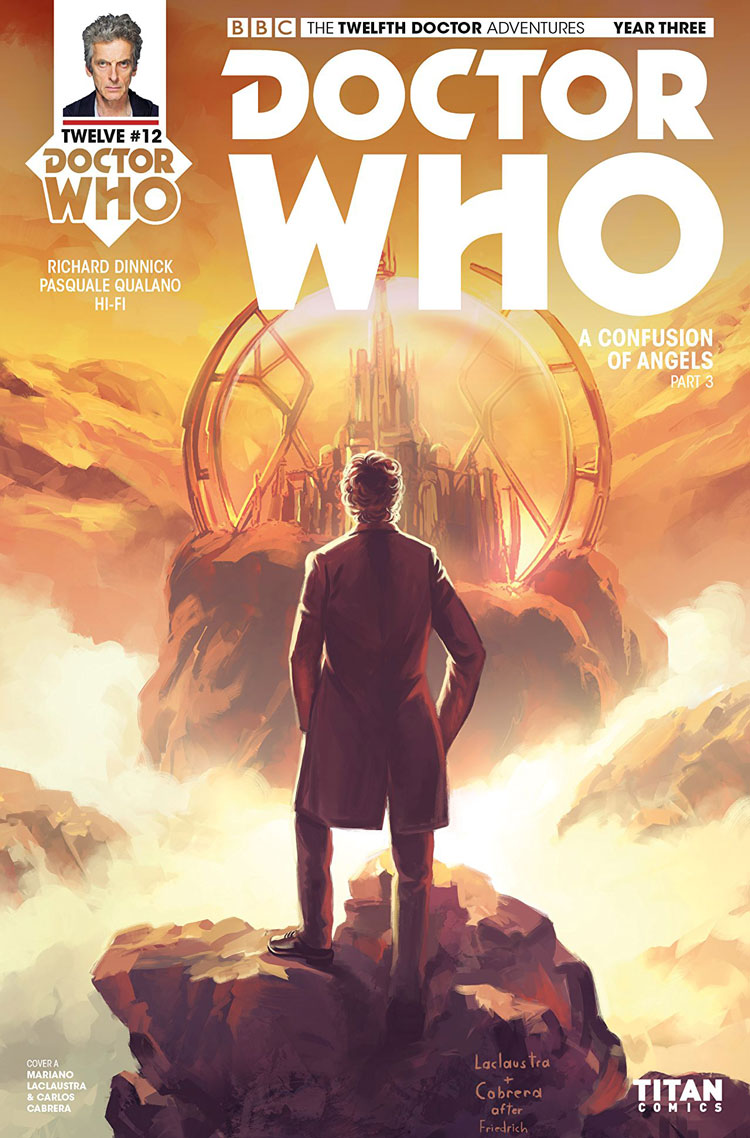 Quick note: During one of my last Twelfth Doctor Who comic reviews I wrote about the hope and desire of the Titan relaunch including a Thirteenth Doctor Comic. This week the announcement came that there will be a Thirteenth Doctor Comic feature an all women creative team, including writer Jodie Houser and a legendary Doctor Who artist Rachael Stott. I can’t express enough the relief and joy this news brought into my house. Stott has been responsible for some of the most gorgeous Doctor Who comics since Titan took over the license. Houser has helmed some of my favorite heroes and villains, from Valiant’s Faith to Star War’s Thrawn. Not to create any undue pressure, but this only elevates all hopes and desires for this book to be a massive blockbuster of Doctor Who storytelling.

The Weeping Angels have been revealed as the real big bad that is hunting the crew aboard a cargo ship transporting the previously unreliable and murderous Heavenly Hosts. Slitheen, Blon Fel-Fotch, is not only reformed with her rehatching, but somehow has her old skin suit and working for the Shadow Proclamation, with Judoon in tow. Plus, there is the creepy kidnapping stowaway in the clown mask that has yet to be revealed. Missy has stolen the TARDIS. Oh, and the Doctor was sent back in time by the Weeping Angels. Is that everything? Yeah, there is a lot going on, however fans of the early years of the Doctor Who reboot have plenty to gush over.

Last time, it was fun seeing Blon have such an important role. Now, small questions about how she has her human skin suit from before the TARDIS turned back into an egg, and why she even uses it are a little off putting. You can explain that she has it because when the Doctor dropped her off on her planet to be hatched and raised again he left the suit there too. The question of why she would use it and how she joined the Shadow Proclamation could be their own unrelated story weaver, a simple throw away line by Nardole, the Doctor, anyone and a quick quip from Blon could settle this unimportant yet irritating character point. Alas, it is not. So, back to the story at hand.

Positives to this rising action issue include the Heavenly Hosts supermodel like Technician Holbert overtly flirting with Bill. Missy has but a page’s appearance but a single line shows that the Doctor’s words of reform are getting to her. Nardole uses the term “babydoll,” plus impresses Blon with his skills. There’s lots of Judoon speak, which my oldest kid died laughing as I read it out loud to him (he’s a preteen.) The overall action of this issue is driven by the realization that there is more than one Weeping Angel aboard the ship and they must be hunted down. Plus, there is a good chance one of the Angels is posing as a Heavenly Host. This means that Nardole and Bill go from being arrested stowaways to instant investigative helpers.

Unlike some other Doctor Who comics, the paneling in this issue has many formal gutters and boarders. Panel boarders only disappear or overlap when communication is underway from one part of the ship to another, a couple of instances where someone, such as Bill or Blon are addressing the whole group before they go Angel hunting and two quick points where tension and action are high toward the end of the issue. It keeps the pacing very even and exact, which is helpful since this is a middle of an arc issue.

Pasquale Qualano’s facial renderings for each character is gorgeous! There didn’t seem to be a single facial expression or representation that threw me off while reading the story. There are some brilliant moments where Blon and a Judoon are communicating to one another and there is a facial overlay showing her appearance on a glass pane. It’s so intricate that you immediately know what you’re looking at, instead of being confused.

What does cause confusion is the order of events toward the end of the issue. The Doctor being thrown back in time and his journey back to the ship is easily shown in exposition pages. What is not clear is who is confronting the Weeping Angels, just as Bill sets off to hunt for them through small shaft aboard the ship. The color work for the sleeve of the person holding the gun on the final panel makes it look like it was Bill. Yet, she is in the shafts still searching. It was a Judoon who finds a Weeping Angel in the engine room. The line work and red color imply it’s a digital image, which Doctor Who fans know is just as dangerous if not more dangerous than a stone Weeping Angel. However, was it a digital image or just the illumination of the Judoon’s gunsight? We are later told Judoon have gone missing, but the color work makes it look like a human hand, not Judoon.

With this one exception, the colors continue to vibrantly sell the line work. Glares, shadows, and illumination is angled in detailed fashion. Light sources are clear, and when there are dark areas, distinct. The blur of color at the end makes you feel the heat from the dangerous sun the cargo ship is about to encounter.

Overall, this is a good addition to the previous issue. It keeps an even pace while building the rising action. The Weeping Angels seem more like the deadly menace they used to be instead of the Doctor Who footnote the television show turned them into. While I have some super fan nitpicks about unanswered character development questions, none of that affects the comic’s actual story. It was an issue that had my children engrossed and already begging to read the conclusion.