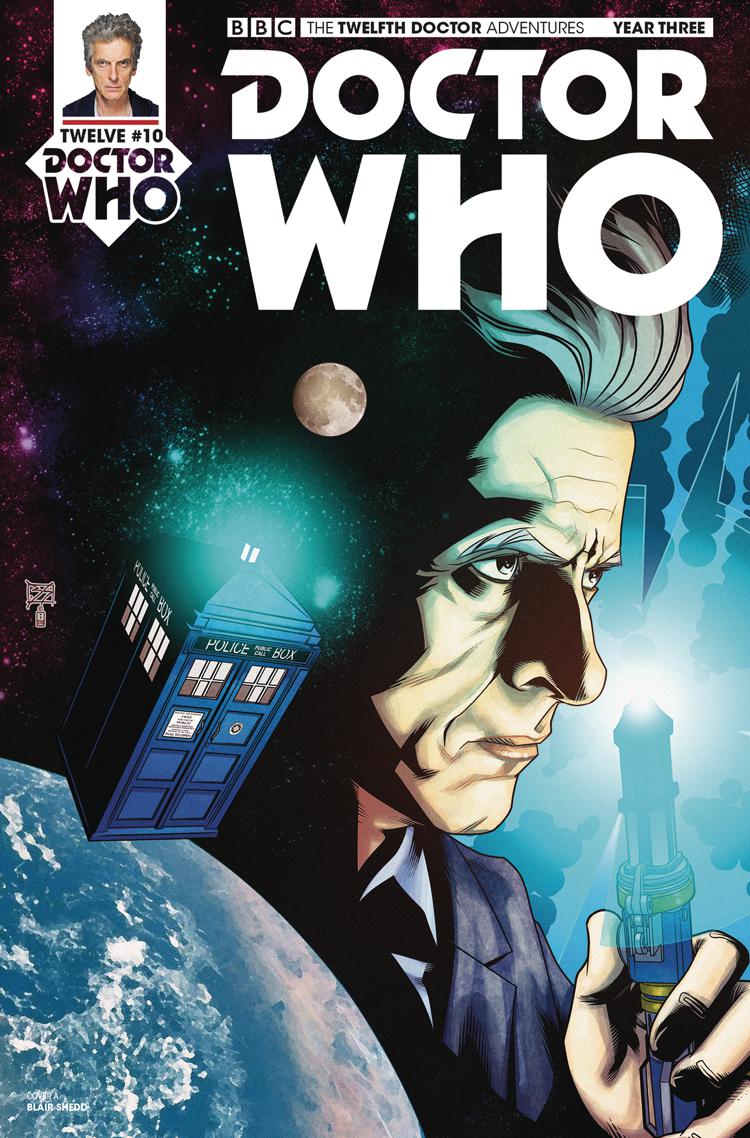 As I was reading and tweeting about this issue of Doctor Who, I found myself declaring, “Why don’t they just throw in the kitchen sink?” However, this wasn’t a complaint. Instead, I was drawn into the fan service Easter eggs and call backs laid out through this latest Twelfth Doctor adventure.

This is the arc that has Bill Potts, from season 10, as the Doctor’s companion. The story began in a previous issue, but, it is not necessary to go back. This issue is good if you’re looking for a good place to jump in and start reading. Dinnick has provided clear and concise exposition with dialogue. A character reveal full of humor shows that this issue takes place some point after the Season 10 episode “The Lie of the Land.” 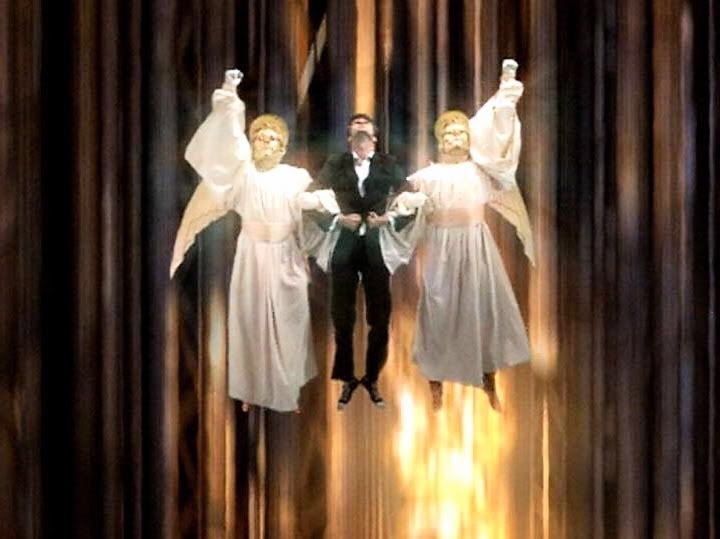 This comic accomplishes an amazing feat, for me. It redeems one of the modern Doctor Who monsters I have hated with a fiery passion since their appearance: the golden angelic Hosts from “Voyage of the Damned.” Most of my distain of these robotic angels, who destroyed a space version of the Titanic, comes from a single moment in the episode where they lift the Tenth Doctor in a Christ-like representation, while he then goes on to save the day. It’s a carnage riddled Christmas special that smacks heavily of the “Time Lord victorious” that will dominate toward the end of the Tenth Doctor’s Story. 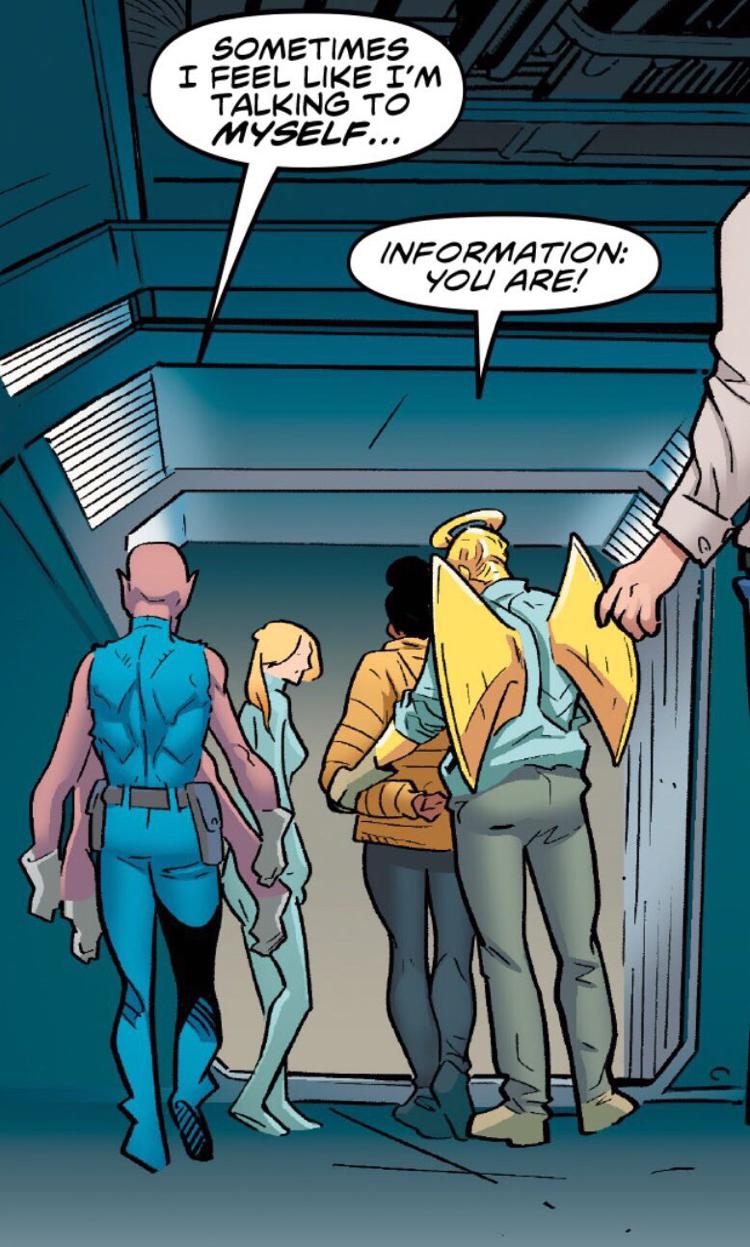 Switch to this issue and the Hosts figure into the story’s mystery. One in particular acts as humorous relief, and suddenly I like them so much more. There is plenty more happening, with disappearing crew, Bill accused of unthinkable crimes, and an extremely odd person sneaking around in one of the creepiest clown masks that’s ever been drawn. All of the Easter eggs and references in the story can be traced back to the Ninth or Tenth Doctors. 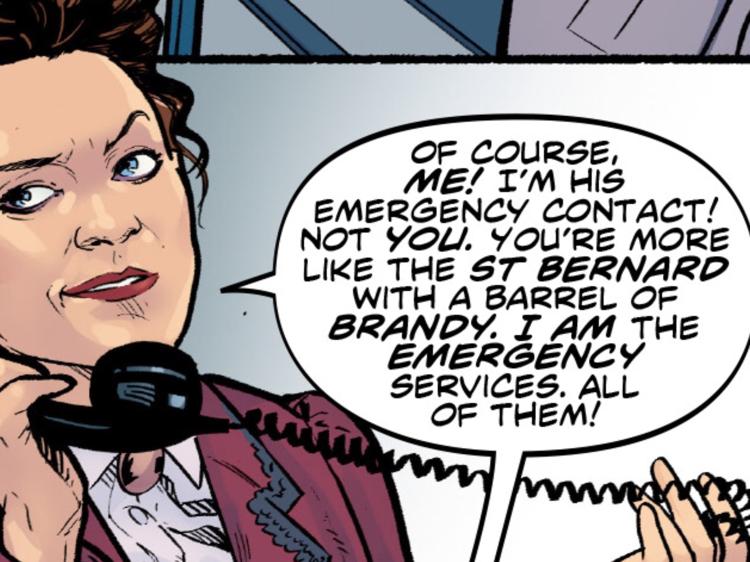 Francesco Manna’s art has been given thick, bold outlines around the characters. Hi-Fi’s coloring is vibrant with color making it clear and easy to take in. The few times where things are blurred or indistinct is very purposeful. The art is used to allude t9 a big bad, without a total reveal until the very end of the issue. Manna’s vertical layout, as the lights go on and off on the space ship, as well as most of the pages with overlapping panels is economical use of page space and quickly pushes the story along. It creates dynamic scenes that could easily turn into dull floating headshots under another artist. In fact there is only a single page with clear panels and gutters that do not overlap. It helps to emphasize a single moment in the TARDIS, the humor and danger of what is happening. Plenty of space has been provided for letterers to work. The lettering blends in so well with the story I had to actively go back and look at it, because it did not distract, stand out or overlap the artwork in any negative ways.

The reality is that I would love to give this comic two ratings. The rating gave the comic, below, reflects the view of a long time Who-fan that understands all the callbacks, references and fan service provided. If I did provide a second rating, it would only be slightly lower for those who are new to the world of Doctor Who. For example, the Weeping Angels powers to transport people through time as their method of “killing” someone could be easily lost on someone who just started watching the show at Season 10. The final note of the story can be confusing if you’re not aware of this. It’s the biggest problem of the whole story. Given, this is a four issue arc, there is a big chance this will still be explained next issue. I’m still going to make the dangerous assumption that anyone picking up a Doctor Who Comic has logged into Amazon Prime or other service and watched previous modern Doctors. Even if you have only scene Twelfth Doctor episodes, there is plenty here to enjoy.

Back in October of 2017 Titan Comics announced that the Doctor Who comics would be taking a brief hiatus after the current runs finish this spring. They said they would be relaunching with fewer titles, to make it more affordable for readers. Currently Titan has the four Doctor Who series, one for each of the current modern Doctors. They also have put out at least miniseries for Classic Doctors each year and a special crossover series. At their release rates, there wasn’t necessarily a Doctor Who Comic every week.

Each of the regular series has provided a different type of story to check out: the Ninth Doctor and his giant monsters, the Tenth Doctor with his psychological and emotional incursions, the Eleventh Doctor and space trouble makers, and the Twelfth Doctor that went all over time and space. These are lines that have been my one steady source of entertainment throughout 2017. It was a year of big changes for me, in my personal and professional life. Having the comfort of my Doctors to turn to was invaluable.

If the number of Doctor Who titles do get reduced, my greatest hope is that the new Thirteenth Doctor, portrayed by Jodie Whittaker, does not get left or regulated to a mini or anthology series. Having the Doctor be a woman has been in the public discussion since Patrick Troughton put it forward in an early 1980s interview. The show’s creator, Sydney Newman, recommended it, when he tried to get back involved in the show. Women have been seeing themselves reflected more and more in science fiction media, and the Doctor is one more step:

i never knew i could relate so hard to a character. i've never felt this close to a fictional person.

I know at this point Titan Comics already has their plans in place for the relaunch. However, it’s my hope for 2018, those plans include a stand alone series for the Thirteenth Doctor. She means so much, to so many. It would be a shame if she didn’t get her chance to shine in the pages of comics.