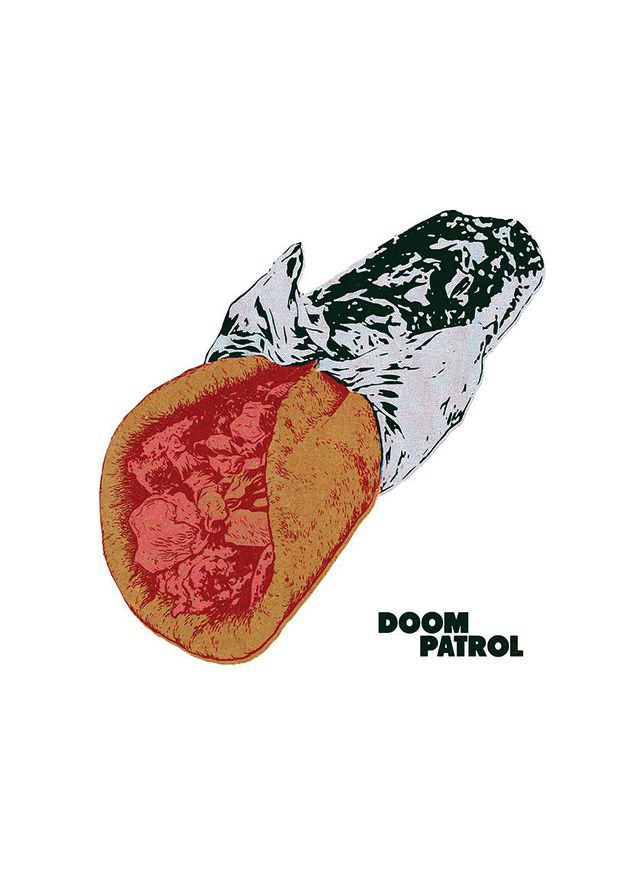 Comic book fans have been waiting for a little while now to see what the debut of Gerard Way’s Young Animal imprint looks like. The wait is over with Doom Patrol #1 hitting the stands. As for Doom Patrol fans, well, we’ve been waiting over five years since the last issue of Doom Patrol’s fifth volume.

Doom Patrol #1 opens with a seeming non-sequitur quartet of panels. The four images feature a racecar driver claiming a victory cup, a crashed ambulance and passed out individual on a barren landscape, a bomb falling toward farmland, and a pair of lips apparently kissing a forehead. It’s a non-sequitur now, but Way no doubt has plans to stitch things together, much as he did with bits that he sprinkled throughout the two volumes of his Umbrella Academy work.

That’s truly neither here nor there, as the issue doesn’t pause for very long in any one spot. We meet our gateway characters, Casey, behind the wheel of an ambulance, wearing driver’s gloves and apparently trying to figure out what’s going on. Once the ambulance arrives at its destination, through the magic of captions, Casey introduces herself to readers, “My name is Casey Brinke, and I only want to do good things.” And it’s totally believable.

The rest of her inner monologue is lyrical and perhaps insightful, as readers learn that she is charged with optimism, despite serving in a potentially emotionally draining role. Further revelations are sprinkled throughout Doom Patrol #1.

An emergency medical technician, Casey drives an ambulance and her partner, Sam, is the paramedic onboard. We meet them as they’re zipping to the hospital with an elderly man in tow. Sam gets a bit existential while eating a gyro and talking to Casey, which serves the dual purpose of exposition for readers to meet Sam and learn more about Casey and to provide a bridge to cross from everyday ambulance operations to bizarre and unusual.

Artist Nick Derington handles all of it like a seasoned pro. Doom Patrol #1 is twenty-four pages of new story (plus a single-page “Next Issue” tease and a five-page Shade, the Changing Girl preview) and gives Derington the opportunity to draw gyros enlarged to show texture, exploding trash bins, piles of discarded bricks, and ambulance run, alien landscapes, and a wide array of characters, from the sassy, slender singing telegram Terry None to the Moofgoobers from Gloam.

Derington works in jazz hands and cat reactions, oversized jackets and speeding garbage trucks, and every bit of it is vibrant and stunning. He uses a wide array of body language and expression and transcribes massive detail into the comic, like the levers on the four-slot toaster, the screen on Sam’s handheld, and the veins on the wings of the flies. Derington fills Casey with personality in every panel, occasionally dialing up her innocence and optimism through drawing shortcuts, like making her eyes only pupils for shots across greater distance.

Derington employs a sharp range of style throughout Doom Patrol #1, but all of it stays of the same source. At the core, it’s all Derington, but the scene of the landscape where readers meet Cliff is different in detail and depth than the scene where we check in on Niles Caulder, which is different from the first two-page-spanning panel that introduces readers to Casey Brinke. His style is reminiscent of Evan Shaner or even Mike Parobeck to a degree, but Derington is a shade different from both of those fan-favorites artists.

Colorist Tamra Bonvillain works nicely with Derington’s art, including the variation in style. The aforementioned landscape where Cliff first appears seems more like colored pencil work while the opening scene, by comparison, is clearly the most vibrant set of tones available in the marker drawer. Doom Patrol #1 does not shy away from saturated colors, and the oranges, pinks, yellows, and purples at play here seem to extend a hand to the reader’s imagination, saying, “Come on. Let’s play!”

Twice in the issue, a word balloon is filled with the image of a fly, different times, different scenes, but undoubtedly destined to be connected. Those flies likely come from Derington, but letterer Todd Klein is onboard to put dialog in its place. Klein uses a combination of all caps and mixed case, frequently using the distinction to indicate active conversations as opposed to inner monolog or reader exposition. The tales of his word balloons are a little more organic than found elsewhere in comics nowadays, which amplifies the pioneering spirit of the Doom Patrol concept.

“Happy Birthday, Casey Brinke” is the first chapter of the tale “Brick by Brick,” and this issue is so very clearly just the beginning. That said, the exposition in this issue is organic, which is to say that by the end of Doom Patrol #1, the reader doesn’t have all of the answers, but that’s part of the adventure.

For now, this is Casey Brinke’s book, but there are enough winks and nods to Doom Patrol stories past to perk up the ears and eyebrows of long-time DP fans: a one page interlude with the Chief; a scene with a guy wearing a nametag from the Oolong Island Hotel and Resort sorting through bricks, crying out for Danny; Cliff appearing and, well, providing a plot twist. All of these bizarre moments telegraph to the reader that things are different here, but on par with historical bizarreness long-term readers may have come to expect with the Doom Patrol brand.

This is world-building at its utter strangest. This is a new volume of the Doom Patrol. And it has a lot of potential to go anywhere. Hop on into Casey’s ambulance and let’s see what kind of adventure Gerard Way, Nick Derington, Tamra Bonvillain, and Todd Klein have in store.