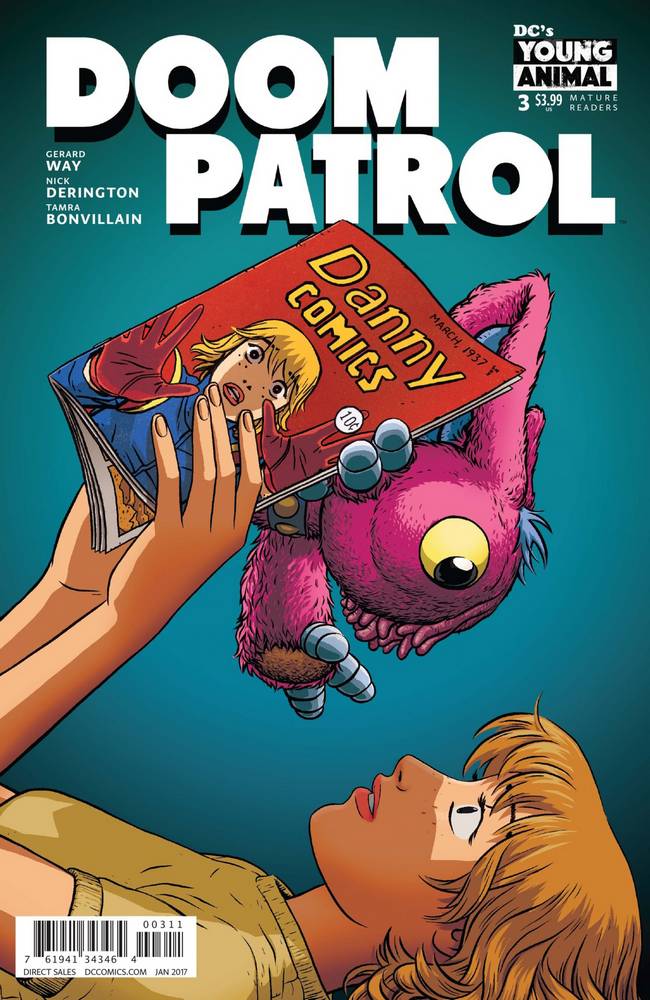 The third chapter of the “Brick by Brick” storyline, subtitled “It’s a Doomed World After All” opens with Casey Brinke and Flex Mentallo gazing out from the cabaret to a sprawling boulevard. That set piece is introduced to the readers as Dannyland in a caption box courtesy of letterer Todd Klein, who really makes his presence visible as a visual contributor in Doom Patrol #3.

That first street continues on, not unlike Main Street in the Magic Kingdom at Walt Disney World or Disneyland, and artist Nick Derington piles on details, packs in people, and drifts through perspective, giving readers a quick tour of the amalgamation of Main Street, U.S.A., Seuss Landing, and Doom Patrol-land. Flex and Casey chat for a bit, giving readers a concise summary of Danny the Street/Brick/World, punctuated by snappy art from Derington and color artist Tamra Bonvillain, before Flex sends Casey on the Itty Bitty Bonsai Beach (a.k.a. It’s a Doomed World) ride (I want to go to there!).

Way, Derington, Bonvillain, and Klein break away from that scene to provide a quick rundown of how Larry Trainor got to be where he is, which is in Casey’s apartment. Casey’s roommate, Terry None, comes home during the rundown. Doom Patrol #3 bounces between Casey’s and Larry’s tales, each stitched with weirdness and zany fun, suspenseful oddities and historical glimpses back through the history of DC Comics’ weirdest super team.

And we also get a name of the crystalline-robotic attackers – the Vectra. And we meet Fugg (the pink and blue critter on the main cover of Doom Patrol #3). And another peek in with Niles Caulder.

There is SO MUCH going on in Doom Patrol #3. No question you’ll get your money’s worth, whether you’re measuring out a return on investment through words, art, color, or panel count – it’s all there, and it’s all fresh. Way, Derington, Bonvillain, and Klein aren’t shuffling through rehashed ideas, they’re taking those ideas, shucking the husk, and finding the juicy kernels inside. And they just keep giving us more, and the threat is starting to materialize in this issue.

Shortly after learning Casey Brinke is also known as Space Case, Captain of the 33rd Novafangs Starfighters Brigade, we learn, alongside Casey, “Everything is coming back to you – your powers, your hardships, your scars. . .” The origins of Casey Brinke are contained in a comic within this comic. That in and of itself would have been trippy, but Danny Comics opens up for four pages that Bonvillain owns, and shares tight collaboration with Derington and Klein, together delivering images that are mind-numbingly gorgeous, lush with detail, evocative of comics history, and simply brilliant. The pages look like old time comics, with color shifts ever so slightly off, tones that are flat, but vibrant and saturated, before shifting back to the “real” world where the colors are still vibrant, but more inline with the story at the heart of Doom Patrol #3.

This is a wonderful adventure that skims through the Doom Patrol’s history and, perhaps, offers up a new raison d’être – to exist for the sake of escaping. By joining the Doom Patrol (such as they are at this point) on their adventure, we see a glimpse of the splendor that awaits, giving readers so very much to look forward to. Until Doom Patrol #4 hits the stands, though, “It’s A Doomed World After All” will be waiting for you to visit, again and again. I’m pretty sure there are new details to find with each visit, and, if not, then just absorb the wonderful work Way, Derington, Bonvillain, and Klein have given us. Doom Patrol #3 is definitely a more welcoming read for fans of any incarnation (although particularly the Grant Morrison run) than for brand new readers, but this issue continues the conical-shaped exposition, blooming open with more information and deeper revelations as the series gains longevity.