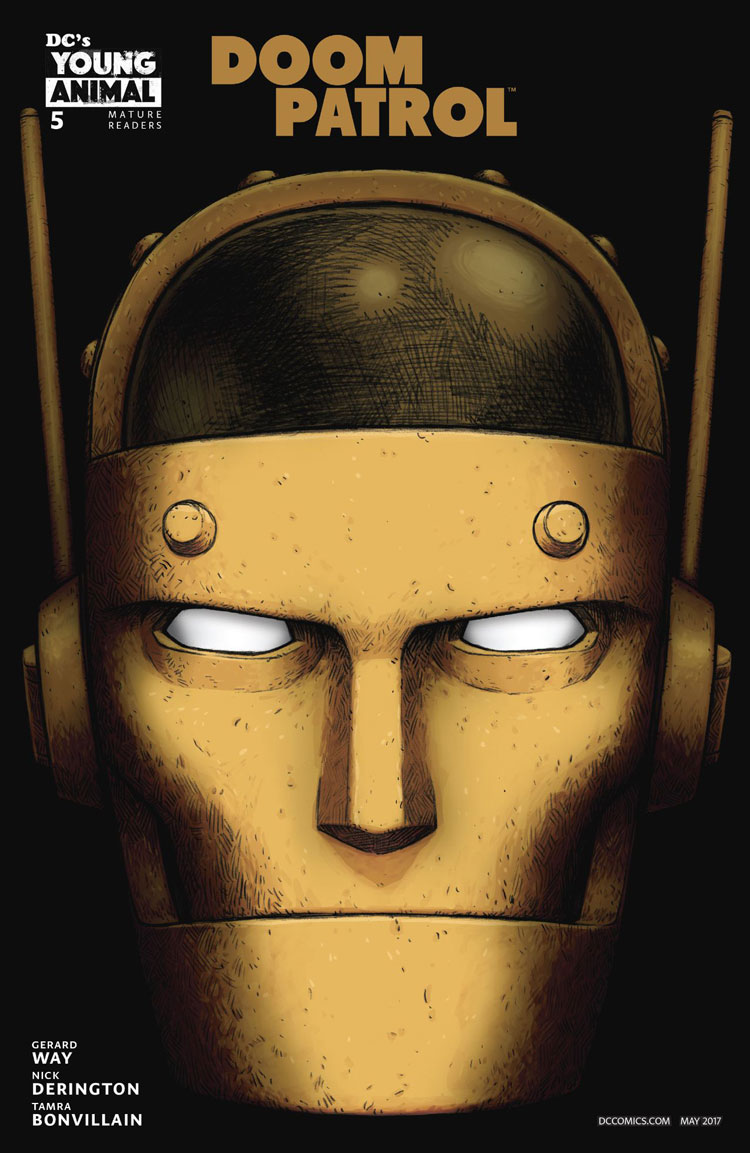 “My name is Casey Brinke and I drive the motherfucking ambulance.”

That might be the best character description of anyone in this volume of Doom Patrol yet, and we have a few descriptions to go on. As a matter of fact, in Doom Patrol #5, Way piles in exposition, introductions, and transformations. And he does it all as naturally as you or I might have a conversation about what we ate for breakfast. Sure, there’s a bit of stilted language and poetry in the dialog, but Way’s entitled to that.

This is, after all, the Doom Patrol.

This comic warms my heart. It’s a fine mix of the Arnold Drake and Bruno Premiani Silver Age surreal madness and the Grant Morrison-Richard Case pioneering that helped stake the claim on which Vertigo eventually blossomed. There’s plenty of tribute present in Doom Patrol #5, from the wide spray of Doom Patrol history, but Way doesn’t follow anything slavishly. As he tweeted before we ever had an issue in hand, “To all the Doom Patrol fans out there — I promise to honor the legacy of this book- that is to say I’m going to put it in a fucking blender.”

This issue proves it. Things blend, grate, and chop, and the end result is something new and different, tasty and vaguely reminiscent of the ingredients.

Which is exactly what Nick Derington does on the art side of things. Doom Patrol #5 looks like a classic comic, with hints of Chris Samnee and Will Eisner, C. C. Beck, and Michael Allred, but it’s 100% Derington. In some spots, Derington’s work is a bit rougher than in previous issues, but the natural line quality is still miles better than so many comics on the stands today. It looks like it was hand-drawn, with loving care, onto the pages of this comic.

But we all know that’s simply not possible, right? Nick Derington didn’t individually draw every page in my hands, your hands, or anyone else’s hands. I mean, yeah, he drew them, but these are reproductions, and I’m simply not going to get into the printing process in a review. Sorry.

That said, Derington gives readers a fine bit of storytelling, frequently using sound effect clues like “Tug” or “click” that don’t overly impinge on Todd Klein’s lettering assignment. Klein still masterfully crafts sound effects and voiceovers, dialog and captions. As Ricardo and Sam hop to the cabaret, the “Bona to vada” trails off, Danny’s ambulance-generated transmissions have static radiance to their word balloons and the ceremony merging Keeg and Larry Trainor thunders and crackles.

Balancing the art nicely between modern and classic, Bonvillain’s colors are cinematic and saturated, regardless of their tone. There are bright greens, cool purples, and plenty of hues in between. If Bonvillain were using crayons to color this comic (I’m pretty sure she’s not, but roll with this metaphor, please) every color would be out of the box, most of the tips would be dull and several of the crayons would be broken from the pressure of use.

Casey’s primary colored suit screams to be translated to toyhood or cartoon, Robotman’s noggin has a slick sheen that describes metallic composition, and all of the energy signatures throughout Doom Patrol #5 seem to actually radiate. At some points, the saturation borders on excessive, but that’s because the story requires it – like the sickly pall over Dannyland.

Doom Patrol #5 is the first time Larry Trainor, Cliff Steele, Flex Mentallo, Casey Brinke, Sam Reynolds, Danny, and Fugg are all brought together. So, in a sense, this is the first true issue of the new volume of the Doom Patrol. And it’s so damn fun. So much happens in this issue that by the end of it, it feels like a collected edition.

Crazy Jane makes an appearance, we see the origin of Lotion (sort of), Captain Larry Trainor finds a new normal, Danny the Matches light the way, and Torminox attacks without a plan. And all of it means something. The first four issues of this series were quite spectacular, but Doom Patrol #5 brings it all together and cranks it up to eleven.

Long live the Doom Patrol. And hopefully with a tighter frequency.