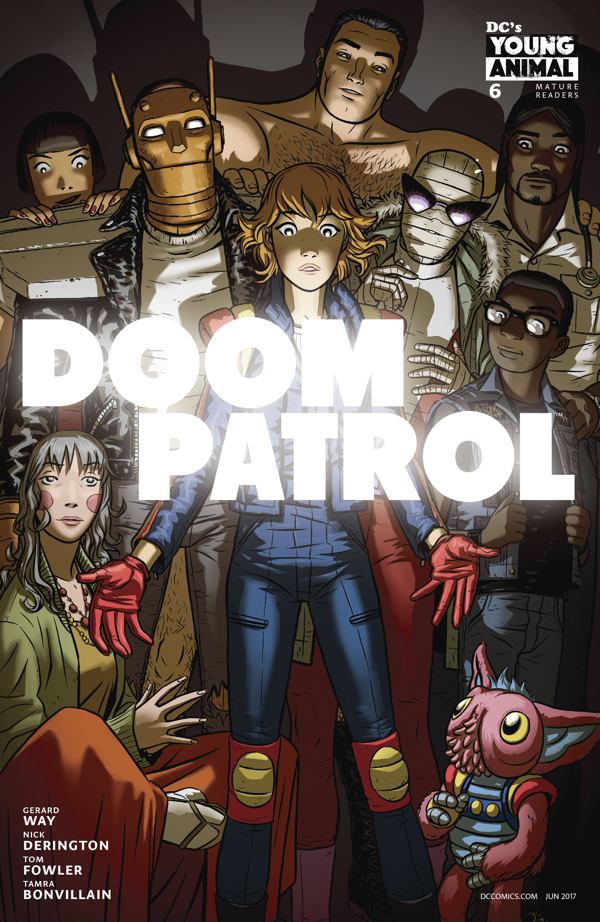 It has all been leading up to this, and in Doom Patrol #6, writer Gerard Way and artists Nick Derington, Tom Fowler, Tamra Bonvillain, and Todd Klein bring the Doom Patrol together in more than just a cover shot.

Reeling from the fight against Torminox, Doodlebug, and the Vectra, the Patrol make a break for it, launching Danny the Ambulance out into space once more.

Space moves quickly and the Doom Patrol come crashing down in New Mexico, right outside of Janestown: Church of the Multiform. Longtime Doom Patrol fans will surely recognize the coincidence there, which, when coupled with the appearance of a fan-favorite Patroller at the end of last issue and on the cover of this one, can certainly do the math and realize where this is headed.

Except Way finds a few prime twists and turns to throw at the readers, and even bands the team together to fight their foe, like a classic comic book team should. Throughout the issue, during the fight and after, Way constructs relationships between the characters, giving readers believable bonds forged in battle, witty banter, and even heartfelt conversations about mental illness, spousal appreciation, and trust. Way’s dialog adds credence to the notion that characters find their voices, and writers sometimes just have to get out of the characters’ way.

Way connects this iteration of the Doom Patrol to Invasion!, which was the transition that shifted the Doom Patrol over to Grant Morrison, and he brings several of the opening panels from Doom Patrol #1 (of this volume) full circle, making Doom Patrol #6 a wonderful final brick in the Brick by Brick adventure.

With an ink assist from Tom Fowler, Nick Derington gives readers an issue chockfull of gorgeous panels. Everything from two spacebound ambulances swapping paint to Cliff and Jane chatting their way through, into, and out of a nine-panel grid or the wide-eyed wonder of Fugg as Ricardo helps spur Danny into action makes its way into this comic, and Derington finds just the right way to share those stories. Every character – even Ricardo! – has a chance to shine in Way’s story, so it’s only fitting that Way’s visual collaborator would find just a wide a variation for the cast. The choices Derington makes in his storytelling are wonderful and energetic, just like the characters in Doom Patrol #6.

So there’s a bomb dropping, an intergalactic battle, and some dead-or-alive scenarios in the pages of Doom Patrol #6. There’s also beautiful, candy-dream color work from Bonvillain, who uses more pink and light purple than should be reasonable in a comic titled Doom Patrol, even if there is a crash-landing in New Mexico and explosions in space. Like Way and Derington, Bonvillain celebrates the wackiness and energy in this cast, and gives readers a visual celebration.

It’s nice to see the whole Patrol congeal in Doom Patrol #6, but Way clearly is not going to just leave it at that. He has plans for the team, from the mischief Terry None is drumming up to the interpersonal dynamics that are already shifting as they’re being rekindled. Quite simply, the team works – both the creative team and the cast they’re working with. Doom Patrol #6 is a high-stakes adventure filled with nostalgia and potential. Way, Derington, Fowler, Bonvillain, and Klein take this arc’s finale to the upper echelon, and promise more to come. Long time Doom Patrol fans are going to be thrilled with this comic, and “long-term” can be translated as fans from the first volume, Morrison’s volume, or even this volume. And it’s really just getting started.