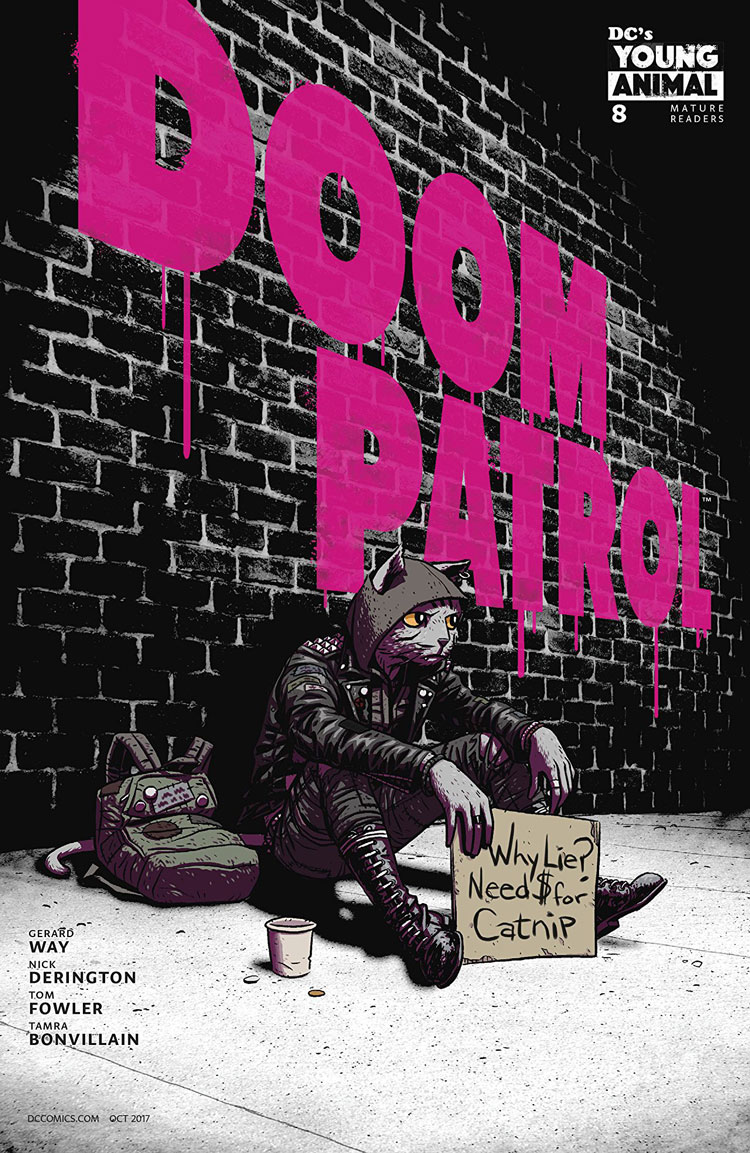 You don’t learn by dreaming. You learn by living.

I do not believe that is entirely true.

– Keeg, the negative spirit inside (outside) Larry Trainor

It’s funny to think of one comic book or a television show or a movie as being more strange than any other. They’re all made-up stories, but some of them seem a little more made up than others.

Coming off the high that is a Twin Peak: the Return, I’ve got to give it over to art that can’t be fully explained. A little bit of Dada. A little bit surreal. A pinch of autonomic magic and a pluck of Freudian logic. It all swirls into this kind of dream state, creamy and smooth on the screen or page. What Lynch did with his revisit of Twin Peaks, Way, Derington, and company are doing with Doom Patrol.

The parallels are pretty striking. Both tales come back to a story long since abandoned, attempting to reassemble pieces in new combinations that will feel fresh and uncannily familiar at the same time, while still mimicking what made the original so dreamy and compelling — and then heightening that feeling until it transcends the original’s flatness.

Doom Patrol isn’t any more a reclamation of the Grant Morrison-penned series (or any other previous iteration) than Lynch’s recent opus for Showtime is. Some of the chess pieces are the same, surely, but even those don’t move across the board in the same linear fashion they once did.

Imagine, if you will, a chessboard that explodes out into 4-Dimensional space. Knights no longer move two along the X-axis and one across the Y, but fold up in higher dimension space to hover above other, newer pieces that don’t even move along an axis, but seem to orbit them instead.

That’s what Way and Derrington (and Lynch, for that matter) have done. They’ve exploded the board and snipped the familiar out of its set place and snatched the new out of wormholes to make a breathtakingly effortless combination in our minds and on the page.

And what’s so brilliant about how Doom Patrol functions is that it owns that sense of folding newness out of nada. It’s literally part of the narrative and part of the conundrum Way now has Casey facing. As the new kid on the block with the Doom Patrol, Space Case is literally a creation of Danny out of thin air, but with a full life and sincere conflict that can’t help but make me feel for her alienation.

Or maybe you are and don’t realize it yet. 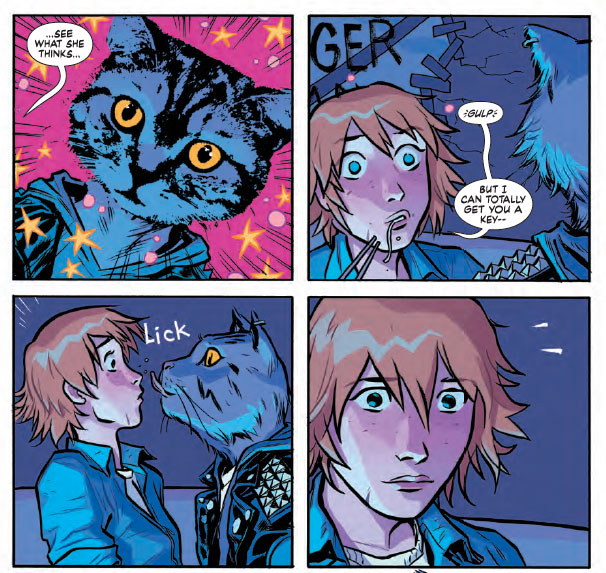 Nick Derington delivers the seduction scene, among others in the issue, with a sort of casual surprise that makes it not so weird for a woman to be having sex with her pet cat. In vignette after vignette reestablishing each character’s mental state, the artist brings emotion to the surface with perfect rendering, brought to completion by the vibrant color palette Tamra Bonvillain employs. Each scene shifts in tone, but not in intensity, giving us what feels like a consistent narrative without any loss in momentum.

There’s a lot to not understand about what Gerard Way is constructing in Doom Patrol, and the deviation from even the most wacky super-hero fare is pronounced. Like Twin Peaks, we seem to be witnessing the return of the avant garde in comics that never was nearly this out there, except in our memory. The familiarity is a comfort. The originality is invigorating. And the possibility is beyond the scope of our vision. Just the way great art should be.