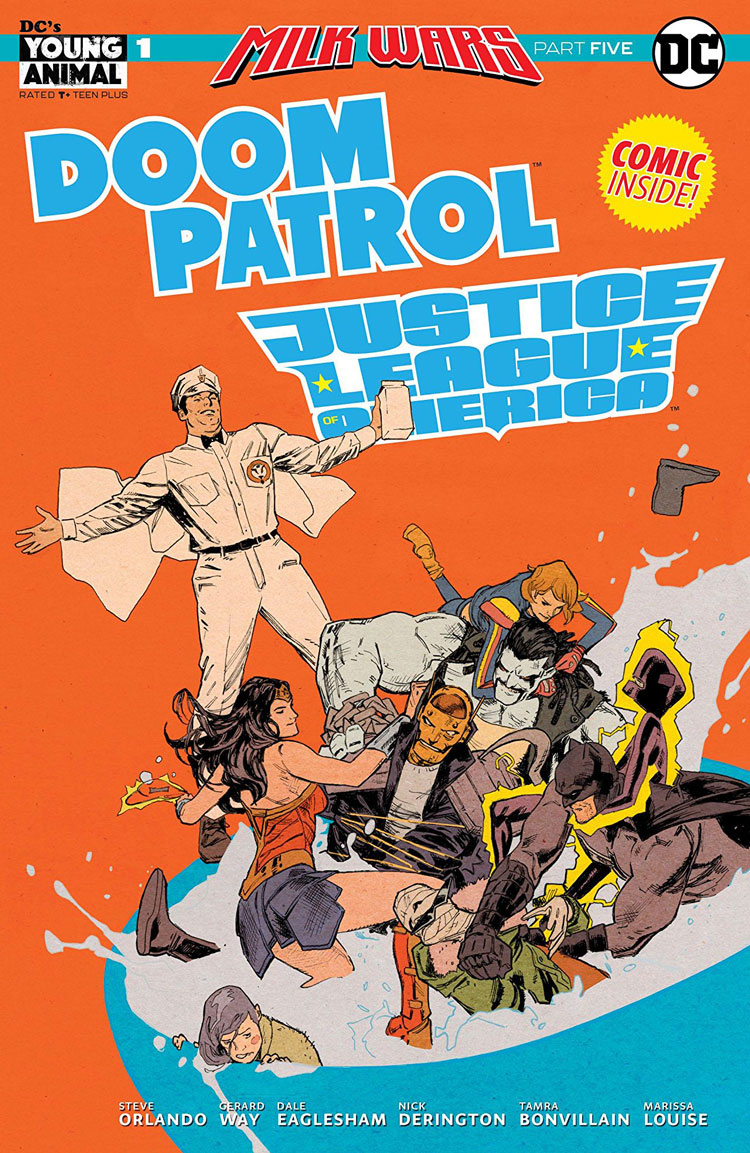 There is no shame in manipulation, but there can be strength in surviving it.

Cave Carson and Rita Farr are in their own predicaments before some of DC’s finest show up to rescue the former. Retconn is trying to change reality itself, and no one is down for that. Through fighting and heartfelt conversations, everyone arrives at a conclusion that seems incomplete but is a much better circumstance than they were in.

Like every other chapter, this story is weird af. I like how it plays on different strata narratively, from the story itself to the use of words that reference a sense of creation and purpose. I left this story wondering about comics as a whole and what people want them to be. The idea of sanitizing characters turned out to be a heavy hitter considering much of the discourse around diversity and inclusion, what they mean, and how ‘sanitizing’ can represent different ideas but very often touches upon the status quo of white, male, cisgender, and heterosexual identities. Milkman Man is lowkey the embodiment of the 50s: an era people love to tout as ideal while forgetting things like racism, misogyny, homophobia, and part of the epoch of the Red Scare.

Steve Orlando and Gerard Way bridge many different worlds within this issue. The goings-on are the very definition of strange, and I like how this feeling is both honored and meaningful. The story starts with a major separation between the culminating conflict and Rita’s existence, but as they weave together we see a drastic and wonderful change. By the time Orlando and Way are done, the issue moves from conflict and discord at nearly every aspect of the story to a curious but endearing peace. Stories don’t always have to end this way, of course, but the impact here is something to behold given the context surrounding the epilogue.

Dale Eaglesham’s style almost makes the story seem ‘normal,’ all things considered. With such fantastical elements, realism can help to ground a story rather than have it go off the rails. Eaglesham also provides a sense of structure, even among the debris, so each page comes off clean despite the chaos around the characters.

Nick Derington’s epilogue is a tidy ending to this entire story and marks a change in how it is visually represented. As a change from Eaglesham’s illustration, Derington’s approach heightens the tenderness in the story’s resolution. Characters feel and look optimistic, even despite the fact that they don’t fully remember what has just transpired. I think there’s something to be said for these different aesthetics and how they represent the story because they create an ironic juxtaposition of the realistic with the bizarre and the stylistic with the ordinary.

Tamra Bonvillain and Marissa Louise are stellar on colors. What stood out to me was a sort of blocking effect with each character, particularly in the epilogue. Everyone seems to have their own distinct palette making them appear as important from other characters and their surroundings. This effect is vital considering most of the scenes involve a nearly full ensemble of action and bodies; Bonvillain and Louise take care to not lose anyone in the progression of the story. And it must absolutely be noted that it was cool to see Mari as a dark-skinned black woman.

The Rita scenes prior to the epilogue are trippy and full of macabre but also increasingly brilliant hues as her tale comes closer to the main story. These images are rife with symbolism on every visual level, evident of how well Eaglesham, Bonvillain, and Louise coalesce their skills.

It bears repeating: this comic is weird af, but each member of the creative team for Doom Patrol/JLA make that a shining element of this comic. Seeing all these characters together is cool enough, but the ending speaks volumes not just to the story but the medium of comics as a whole. Diving into the various meanings of this text was beyond enjoyable, and I’m glad we are getting more stories in this vein. This story in particular is a reminder that bringing worlds together can be a fun ride and is an important part of engaging continuity.