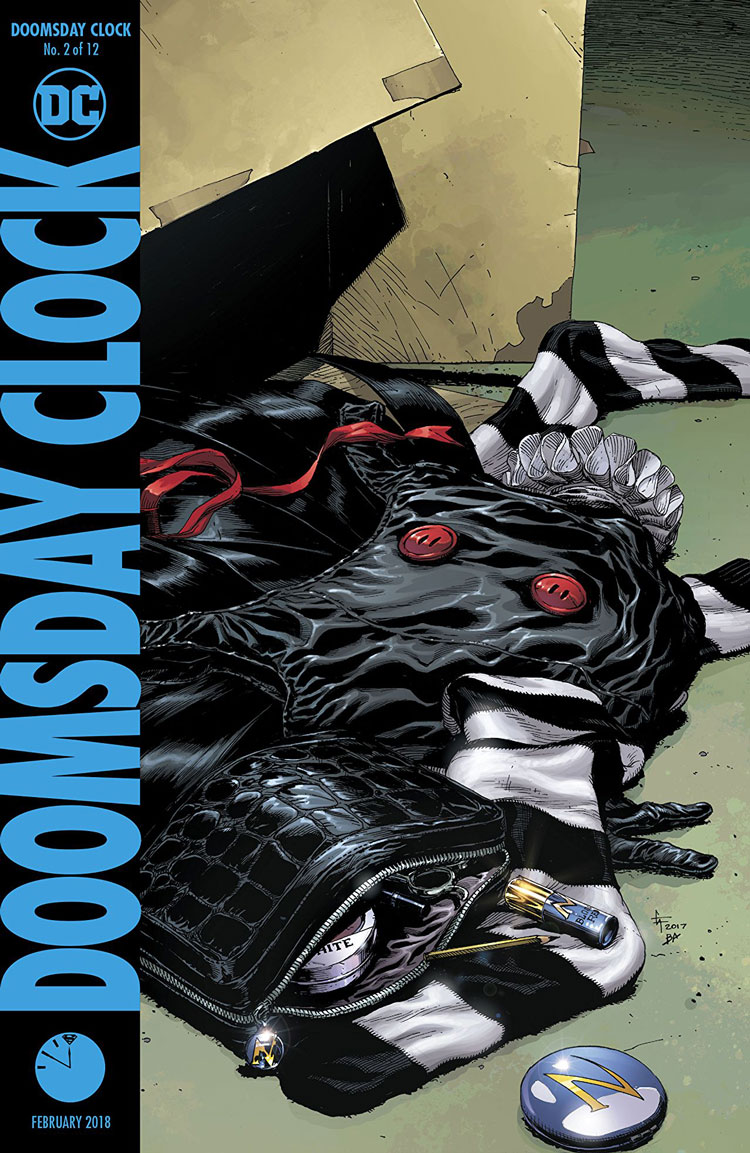 In this installment of Doomsday Clock, Ozymandias, Rorschach, Marionette, and the Mime make it out of the Watchmen corner of the multiverse just in time and arrive on Earth 0, the universe where most main-line, continuity DC comics take place. There they split up in search of aid from the DCU’s two smartest residents.Both Rorschach and Ozymandias find a lot more than they expected.

Reading Doomsday Clock is such an odd experience. It’s generally unfair to judge one work by the standard set by another; art should be measured on its own terms. But Doomsday Clock begs, practically pleads, to be compared with Watchmen. It’s not just that it’s the first direct sequel to the thirty-plus-year-old comic, it’s that every aspect of the work itself is intended to evoke Watchmen, from the use of nine-panel grids and a muted brown-yellow-grey color palette to the world-expanding prose back matter that concludes each issue.

That puts the reader in an odd position when judging the work. Because, with a step taken back and eyes unfocused, this is a pretty good, maybe great comic. But judged on the terms it’s asking to be judged on, as More Watchmen, it’s noticeably lacking. And a lot of this problem is stylistic; it’s a sort of form of the Uncanny Valley. If this were the same story being drawn and presented as a sequel to Watchmen in a style more similar to Johns and Franks’ usual oeuvre, the dissimilarities to Moore and Gibbons’ original would be unremarkable. But consciously aping the style and presentation of Watchmen draws attention to all the ways that it’s not Watchmen.

How is Doomsday Clock not quite Watchmen? The dialogue is off. The attention to detail isn’t quite there. The story craftsmanship isn’t at the level established by Moore. It’s less dense and more decompressed. The back matter feels more like cryptic clues to a mystery and less like world-building, and moreover lacks the verisimilitude of the book and article excerpts in Watchmen. The use of flashback is different, not necessarily in a bad way, but in a way that calls attention to the fact that these flashbacks are not like Watchmen‘s flashbacks.

That said, the book is at its best when it’s not trying its hardest to be Watchmen and falling a bit short. The parts that are focused on the DC Universe, and there are a lot more of those parts here than in the first issue, are top notch. This issue also gives us our first taste of the DCU responding to Watchmen, in the form of a conversation between Lex Luthor and Ozymandias, and it’s undeniably interesting. There’s also a lot to like even in the Watchmen-focused portions of the book. Marionette and the Mime, in particular, are a joy to watch in action and may be the most interesting, satisfying part of Doomsday Clock.

Ultimately, Doomsday Clock is an entertaining comic that sets up some interesting-enough mysteries (albeit Johnsian “Why is this like this?” mysteries, e.g. “Who is the new Rorschach?” “What’s up with the Superman Theory?” “Why does Ozymandias need Marionette and the Mime?”). It’s well-made, even if it falls short of its seeming aspirations.