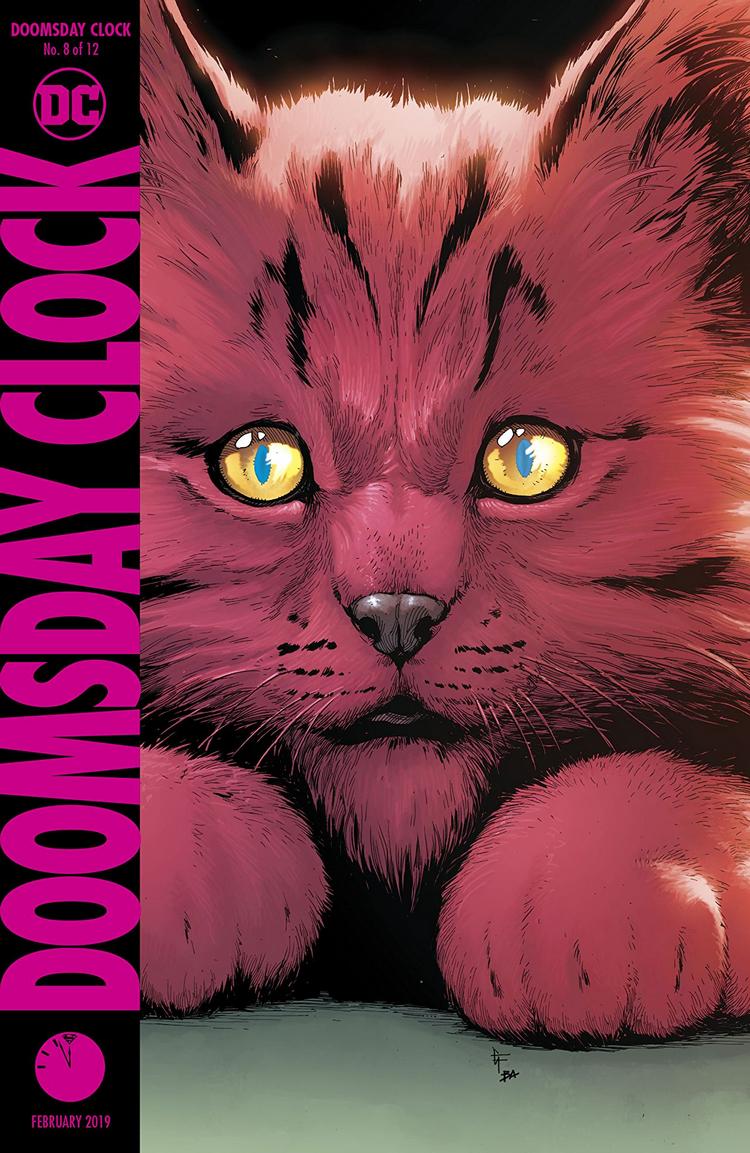 A tense political thriller set against the backdrop of a DC Universe struggling with the Supermen Theory, Doomsday Clock #8 is quite possibly one of the series most intense issues yet.

Geoff Johns continues to outdo himself with each new issue of Doomsday Clock and #8 is no exception. The issue centers around the Supermen Theory and a growing conflict between Russia and the United States over an incident involving Firestorm and the Russian hero Pohzar. The conflict arises from mysterious circumstances but the presence of Adrian Veidt at the beginning of the issue makes it clear that he is most likely the puppet master behind the curtain pulling all the strings. During the altercation between Firestorm, Pohzar, and a crowd of Russian citizens one thing leads to another and Firestorm makes a grave mistake that sets quite a few wheels in motion. Johns has done a fantastic job of masterfully balancing the science fiction and superhero aspects of these characters with political aspects that just make this one of the year’s best series. He does and even more fantastic job of getting to the very marrow of these characters and putting them on full display. The Firestorm conflict comes to a head when not just the Russian Government is looking for him but the US government as well as Superman. This search for the young Pittsburgh hero leads Superman to Kahndaq where he meets with Black Adam and my absolute favorite page and exchange from the issue takes place. Johns does an absolutely stellar job crafting this page as he uses very little dialogue between Superman and Black Adam, but instead relies on the history between the two characters to tell you absolutely everything you need to know. The page is so full of tension and bad blood between the two, but it’s clear that whatever is happening Superman is going to need Black Adam. The issue ends just as it began with Adrian Veidt slinking around in the shadows pulling strings and reveling in his devious works. I won’t spoil too much, but Johns has set the stage for the conflict to get even more interesting than it already was and for the world to potentially look at Superman and Metahumans as a whole in a completely different light.

Gary Frank once again proves that he is without a doubt one of the best artists working in comics right now. He skillfully crafts each character on each page and each one feels unique and full of personality. He is a master of facial expressions and at any given moment the characters he draws don’t need to say a single word for you to understand exactly what they feel and are thinking because he lays it all out on the page and its understood. Frank does a wonderful job of perfectly portraying the tense political atmosphere surrounding the Supermen Theory and metahumans in general. His art gives the book the feeling of a breath right before a fall and then the gasp shortly after hitting the ground. Its full of stress, confusion, tension, fear, and surprise and Frank in no way disappoints. He uses such nuance in depicting the fear and confusion of Firestorm, the deviousness of Veidt, the concern and worry of Superman, the anger of Pohzar, and the war readiness of Black Adam. Frank crafts my absolute favorite page in the entire book, the meeting between Black Adam and Superman in Kahndaq. Since Johns used very little dialogue in the page its really Frank’s moment to shine and boy does he more than rise to the occasion. Frank conveys the entire shared history of conflict and tension between Black Adam and Superman through masterfully crafted close up shots of facial expressions and gestures without ever uttering a word and he does it so smoothly and with such finesse. He perfectly conveys the roles that the two find themselves in with Superman coming to Adam as a citizen of the world and Adam acting as the ruling power in Kahndaq which is currently acting as a sanctuary for any metahuman who seeks asylum.

Overall Geoff Johns and Gary Frank have delivered another stellar issue of Doomsday Clock and moved the clocks hand another minute closer to the hour that we have been waiting for. The stage is set, and all of the pieces are moving into their places on the board and I’m certain by the end of this series nothing will be the same. Johns and Frank’s artistry goes fantastically with one another, with each one bouncing off the other and elevating the others works. Doomsday Clock #8 might just be some of Johns and Frank’s greatest work. The issue delivers a really interesting story and conflict and draws you in as the ready and makes you want to keep reading, it ends on a huge cliffhanger that I’m ecstatic to see the outcome of.