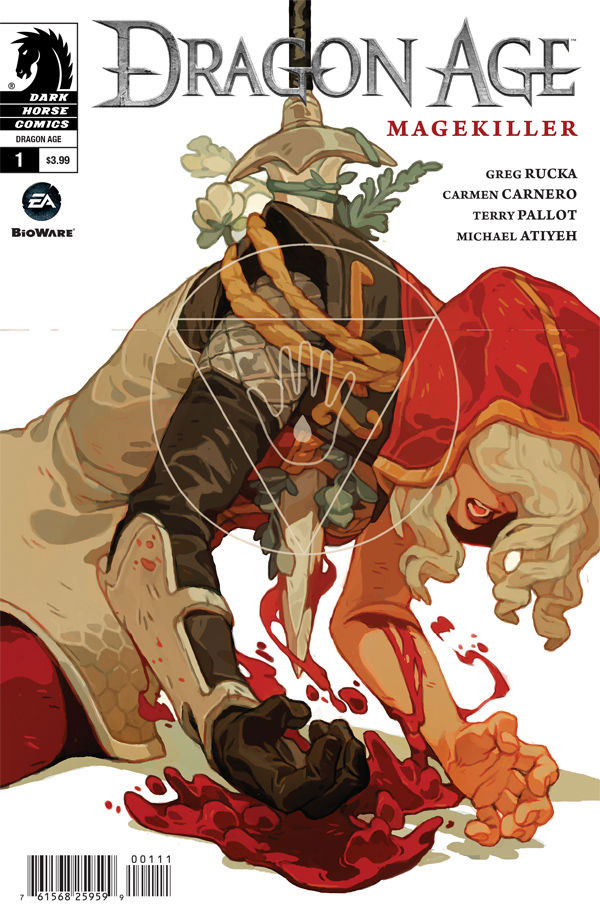 Marius and Tessa are mage killers, mercenaries hired to stop rogue magic users and rescue innocent victims from their thrall. The pair work diligently, with precision, and without bloodthirst. But when an emissary from Marius’s homeland brings a dilemma to their door, things may get personal really quickly.

Dragon Age is a tricky book for me to wrap my head around, because I’m not your typical fantasy reader (the husband watches Game of Thrones without me), nor do I play video game (ditto above). But. I am a Greg Rucka fan, and this book, like many recent ones, is a departure from his larger body of work. And in some ways it isn’t, starting with a central protagonist — the narrator anyway — being a determined, fierce, smart woman.

Tessa starts off the series with a monologue about magic that actually turned how I think about it on its head a little. We all hear about how magic has a price, but the idea that all power, no matter how it’s acquired, has a price is something I hadn’t considered. And in some ways, magic does its best to circumvent that price, pay it back later, by temporarily cheating the “system” i.e. physical effort, physics, etc. And to the degree that Marius and Tessa are simply policing that cheat with extreme prejudice, well, it seems pretty fair to me.

The mood being set by Rucka’s monologue through Tessa’s voice is strong, with the tension surrounding Marius filling the narrative space despite his chosen lack of speech throughout. We get a strong sense of the man’s history even without details. The pain of it. The sacrifice. But we’re not quite getting the same from Tessa, yet. Her pragmatism shines through in contrast, but it doesn’t give us much more of what makes her tick than what she says, which is a little unusual for Rucka’s central women.

But where I think this issue has the most trouble is in visual tone, as the pencils and ink by Carnero and Pallot don’t really give much of anything spectacular to the book. Most figures are rendered generically unless seen in close-up, and the layouts feel a little closer to storyboarding on most pages than dynamic flow from panel to panel. Atiyeh’s colors are strong early on in the issue when the contrasts between light and dark are more pronounced, but lose a lot of their energy as the story moves into daylight in later scenes.

Where Carnero is succeeding quite effectively, however, is in the representation of space. Every environment Marius and Tessa find themselves in gets detailed out from every angle, so the idea of the geometry of a room or dungeon cell is fully fleshed out. I feel like I know how every wall relates to every other one and could navigate through the space if needed. That’s a pretty sincere accomplishment very few artists master on the comics page.

A warm start to a series I’m curious enough about to continue, Dragon Age: Magekiller #1 may be a bit of an uphill battle for me. But with Rucka’s involvement and some of the artistic nuances I’m already seeing here, I think it will be worth the read.