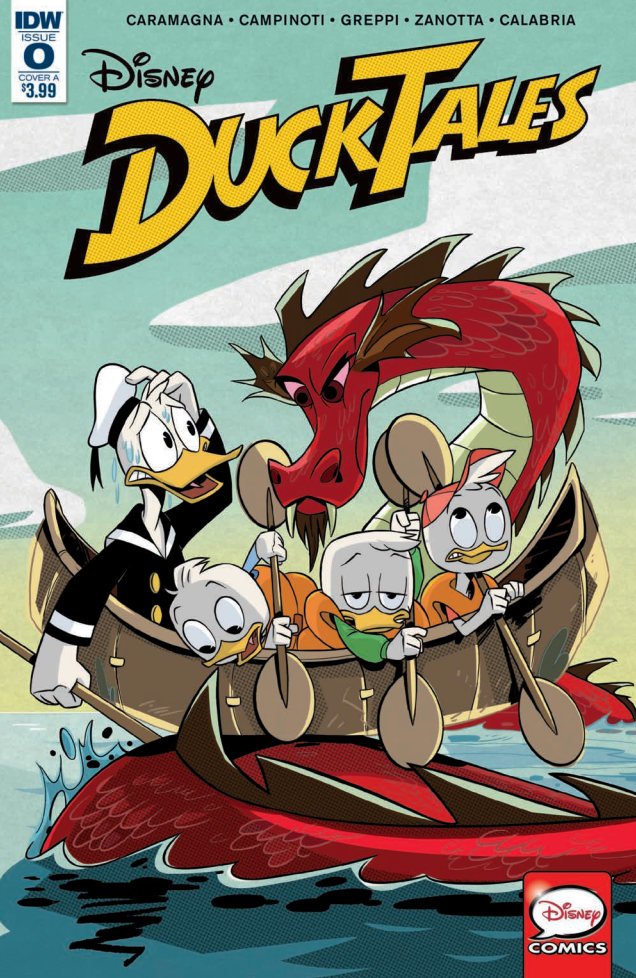 Huey, Dewey, and Louie are back with their unfortunate Uncle Donald! Ready for any adventure that comes their way, the triplets are out finding trouble in this exciting zero issue of Ducktales!

I love what Caramanga does with the four mains of this comic. Donald actually legitimately cares about the triplets and I find that heartwarming. He wants to be a good dad to these boys and he tries his best, even when the boys selfishly give him heart attacks at every turn. I love that about him and I feel kind of bad for him with how the boys constantly take advantage of him despite his best efforts to keep them doing safe activities.

I love that Huey, Dewey, and Louie aren’t Alvin and the Chipmunks personality grafts or clones of one another. Caramanga sets out to take the effort to give them interesting personality traits.

While I’d say Dewey’s probably the least characterized of the three, I love how Huey’s this kindhearted boy scout and Louie’s this slick, industrious greed machine. Louie’s probably my favorite out of the three due to him being so ridiculously terrible at times. He’s just so entertaining.

Greppi, Zanotta, and Florio do well to distinguish the triplets. The boys are distinct not only because they’re wearing different clothes from one another, but also hairstyle, how open their eyes are, and how they posture themselves. I appreciate the effort to bring their unique personalities out within how they dress and display themselves, it brings nuance to the work.

The coloring done by Calabria and Fontana is great as well. I like the fun, bright colors they bring to the table which add to the cartoonish antics. I think it’s great that they took the time to shade everything, lighting always makes me feel like colorists are putting in that touch more of effort to make the comic look even better.

The lettering done by Long is pretty awesome as well. I like it when screams break out of their word bubbles. I like how there’s some time taken to make the SFX more distinct and to make sure that the SFX font fits the sound it’s standing in for, from the zigzag white-blue BRRRZZZT of a bird being electrocuted to the standout danger orange of CRASHes. It’s nice to see those touches of detail.