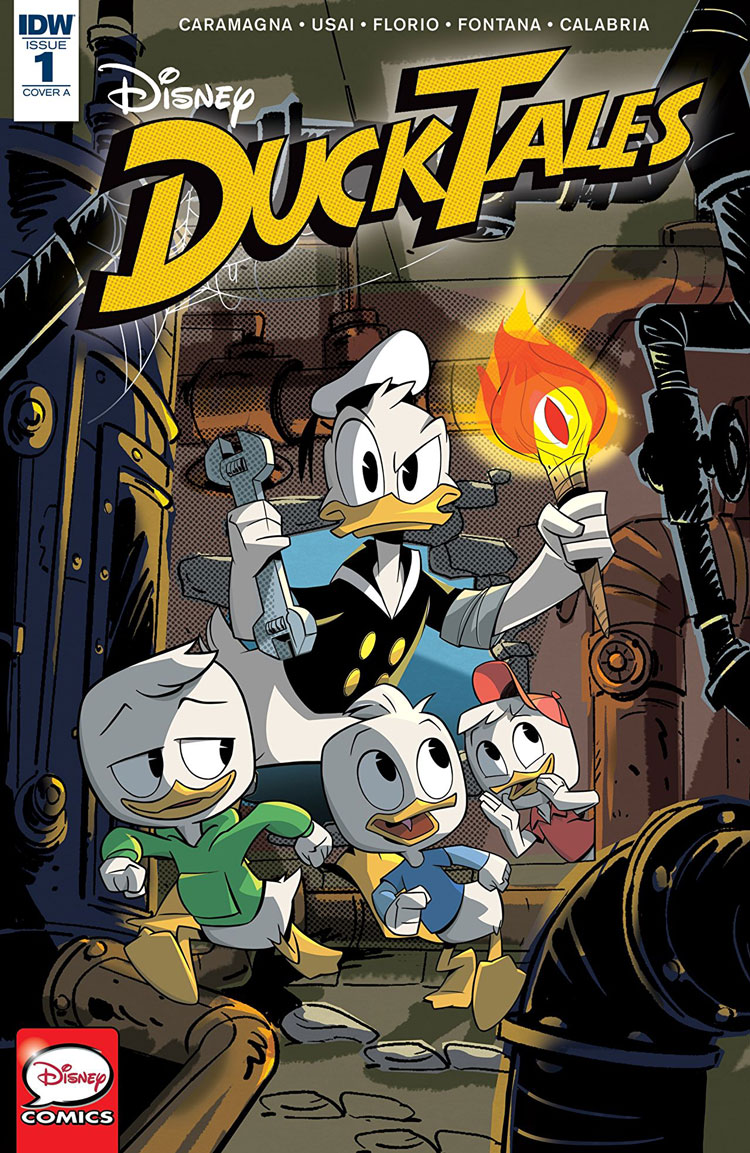 The new DuckTales cartoon is sweeping up old and new fans alike into the hilarious misadventures of the Disney Ducks. IDW, in a brilliant stroke of genius, is capitalizing on this wave of feathered nostalgia with a DuckTales comic of their own. This comic adaptation of the DuckTales crew is a lot of fun, and holds true to the spirit of the original cartoons, while adding a modern twist that will steal kids’ attention away from their glowing iPads.

Donald Duck, Huey, Dewey, and Louie, are in for some new adventures in this opening issue of IDW’s new DuckTales series. Though Donald does some things that would most definitely warrant a call from protective services, and Huey’s Junior Woodchucks troop seems to be teaching some serious trouble-making skills, this book is adorable and funny all the way through.

Seeing the ducklings get themselves in and out of trouble is wonderful in any medium, but this comics sets itself apart by adding a distinct new style to a well-known and well-loved world.

Hopefully, this is the first of many Tales of daring-do bad and good Luck Tales (woo ooo) to come.

This introductory issue includes two short stories, both written by Joe Caramagna. Calling them short stories seems disingenuous, though. They are two complete, fleshed out stories that feel like individual episodes of a cartoon. Caramagna manages to capture the personalities of Donald and his nephews perfectly, and the lack of necessity for exposition played to his favor, allowing the stories to jump straight into the action. Even someone who is totally unfamiliar with Donald Duck (somehow) would be able to jump into these comics without a hitch.

My only complaint is that these two shorts seemed fairly similar. They are formulaic and end in about the same spot for Donald and the boys, which seems repetitive. The plot, while cute and comical, is missing the extra layer of humor that makes Donald Duck and DuckTales appealing to an audience beyond the elementary school crowd.

With a little more time to develop the characters in this iteration, I hope that some of the plot formula dissolves. and opens up new possibilities for these familiar characters. However, there are plenty more short stories to come and I’m sure the huge base of much younger readers will not mind at all.

The art feels true to the characters and their history, but still updated, bright, and lively. These separate stories incorporate different artists who work seamlessly. The stylistic differences are noticeable, but not jarring, which is a fine balance.

Working with licensed material can make it difficult to demonstrate a significant artistic voice, but the artists and colorists working on these comics have infused each page with a little of their personal style and flair to accompany the familiar Disney magic.

This issue was a lot of fun, though fairly formulaic and a bit repetitive. I enjoyed having two full stories completed in one issue. It can be difficult to market single issues to kids, because the monthly format for serialized comics can be confusing, and waiting for the next chapter requires a patience that most kids just don’t have.

IDW made an excellent choice in employing this format, because anyone picking up this issue off the rack can get the full value of the comic without having to worry about the next issue. This format opens up all ages comics to a broader audience, and hopefully that increases the reach of this series.

I am curious to see if some of the stories begin to interconnect and create more of a serialized narrative, but if not, the individual stories stand on their own.

If you are a fan of classic Disney and Donald Duck comics, or DuckTales (the old and the new), this comics will be a great read for fans of every age.