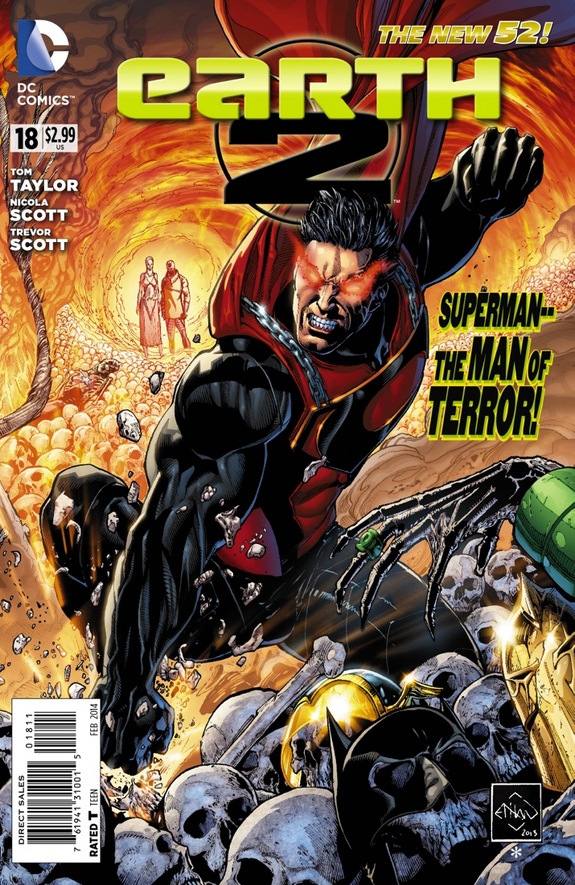 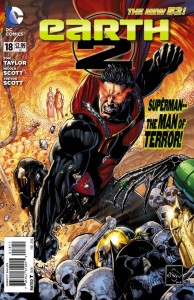 The stakes increase as the Earth 2 Batman continues his mission to defend Earth from the twisted Superman.

Tom Taylor, with his work on Injustice and Earth 2, has proven he is a master of working in different DC “realities”. Taylor delivers a strong second issue at the helm of this reality, giving readers a high octane issue with some exceptional reveals. The world of Earth 2 is exciting and dynamic by his hand, filled with energy from it’s unpredictability. Taylor shows readers throughout this issue that the Earth 2 Batman is unlike any Dark Knight we currently know, and Taylor is doing an excellent job of letting details about him be revealed slowly. We know as much about this guy as the characters in the comic, which makes his unpredictable behaviour all the more shocking…and entertaining. Taylor maintains the strong voices of the characters James Robinson built, and writes a very solid Jay, in particular. His interactions with Superman are hilarious while maintaining the seriousness of the situation, which is no easy feat. Jay is the heart and soul of this series and Taylor’s dialogue involving Jay is brimming with energy and a surprising amount of hope, considering the circumstances. This is a bleak world these characters are suddenly living in, and while Taylor never diminishes the threat he infuses the series with a great deal of hope for the future. It keeps Earth 2 #18 from being bogged down and depressing, which I hugely appreciated. Taylor is cooking up an interesting arc that has the pedal pushed to the metal and I can’t wait to see what he has in store for these characters next.

Nicola Scott’s artwork in this issue is absolutely fantastic from start to finish. She does an excellent job of conveying the emotions of these characters through facial expressions alone, and the overarching feeling of fear of what Superman is capable of is evident in the mannerisms of every character in this comic. Scott is a top-flight artist and her work on this title, and this issue, proves it. She does a fantastic job with the new Batman of expressing multiple emotions and having the character shift from regretful to angry in moments with no indicator but his eyes, which are hidden behind a mask. Scott visually distinguishes this Superman from the character we’ve known for 75 years very well, letting the unbridled rage flow out from the character’s eyes at every opportunity. Earth 2 is one of the best drawn series in comics month in and month out, and issue #18 is no exception.

Taylor & Scott are cooking with fire 2 issues into their run and are cooking up one of the most unpredictable superhero books in comics. Earth 2 #18 is a great read for anyone who has been enjoying the series, and for anyone hopping on board because of Taylor’s Injustice work, you’ll feel right at home with an altered universe by his skilled hand. This is a well crafted and entertaining read and I can’t wait to see this Batman and Superman showdown.