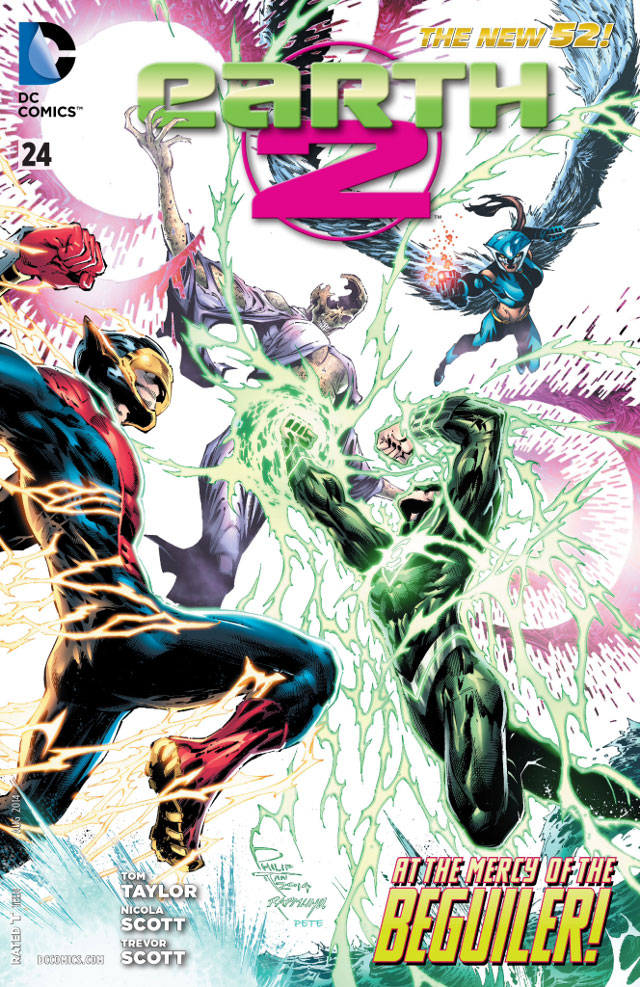 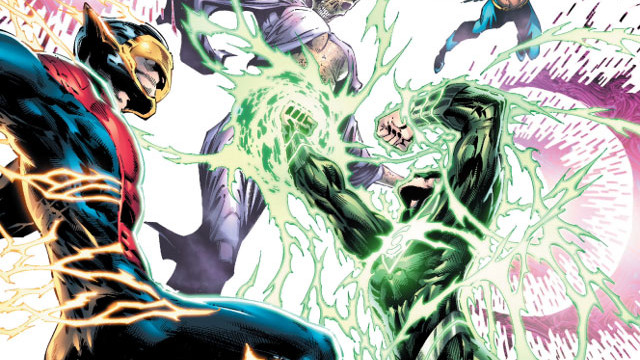 The new trinity of Earth 2 — Green Lantern, Flash, and Hawkgirl — are finally reunited against the Parademon threat unleashed by Bedlam and Beguiler, as Batman’s team coalesces on Amazonia, the new headquarters of the World Army. As one hero’s death hangs over the group, Val is going to have to make a decision about how to save the world. And will Jimmy Olsen end up Superman’s best pal, or Batman’s?

A lot happens in this issue, as in almost every other issue, but for the first time in months, we’re starting to see the light of an ultimate conclusion. The second Apokalips War (I wonder if Earth 2 ever even had World War I and II) is still in full swing, but the heroes are clearly getting their second wind, particularly the long scattered first wave of new wonders we were introduced to at the series’ start.

It’s clearly been a difficult balancing act for Taylor these past months, trying to get the second crew — Batman, Lois, Jimmy, Aquawoman, and Val — where they need to be to defeat the original Superman and launch into the weekly series this October. It’s now clear there’s really two separate core teams moving in these pages, and the balance in this particular issue is quite strong, with Taylor reserving the strong character moments for Jimmy, Batman, and Val, while Alan, Jay, and Kendra kick butt across the wasteland.

Jimmy Olsen, in particular, is such a fresh conception for the character that any doubts I had for his place in the book have long since vanished. His empathy, like Lois Lane’s, seems to have no limit, and it’s obvious that it’s Tom Taylor’s deep love for the Superman mythos that has led to these once supporting characters becoming headliners all on their own. Hand the man a Superman who destroys the world, and you get a brilliantly intuitive Jimmy, a fount of compassion in Lois, and a brand new Man of Steel who may end up being the most caring representation of the shield ever put to paper.

Eddy Barrows fills in for Nicola Scott this month, who is no doubt working overtime on next month’s double-sized issue. What’s most surprising is that Barrows did not miss a single beat here. Like Scott, he and inker Eber Ferreira handled the balance between devastating war and the most emotive of facial expressions and body language with perfect skill, giving us — alongside Taylor’s words — the most adorably genius Jimmy we’ve ever seen. Everything he touches, from Hawkgirl’s form in flight to the Flash’s look in captivity, is just seamless for the title. He was an excellent choice to maintain the highest quality this book has been gifted with to date.

Still running as one of my top two favorite titles in the market today, and always the one I can’t wait to read the moment it goes live online, Earth 2 #24 is but the run-up to what looks like the biggest freefall excitement the title has had, coming next month. Whether it’s to see Val’s emergence as the next Superman or Jimmy’s leap into the classic togs of Robin — my jury is still out on whether that was a serious claim or not — this is a book you do not want to miss. The action only gets bigger from here.